It’s Our Choice How We React to Challenges

Yes! You are stuck currently in my hotel room, but if you walk through those doors, you would see palm trees waving.

And just beyond the palm trees, you would feel the ocean breeze coming off the Atlantic in sunny, southern Florida.

It’s gorgeous, for those of you down here right now, you know that to be true.

And I am thrilled to spend just a couple minutes with you this morning before you wrap up your morning, move into lunch, and get ready to live into your best days yet.

I want you to remember this. I’m going to say it again, so write it down. Commit it to memory. Here we go Jim and Katie and everyone else joining us. Abby, welcome.

I was reminded of that quote on a flight, not this morning (I had an early morning flight this morning), but this one was actually was last night. Back home to St. Louis to see my babies.

Just as we were landing, a gentleman behind me one row to the left, screams out two curse words, then comma, and says lady.

So he’s cursing at some lady to his left, the lady in the middle seat because she spilled a tiny bit of water on him. Or not water, but coffee.

Not ideal, but the coffee was not significant in size. It also was not hot, and we were done for the day.

Trust me, we were all done for the day.

And he’s freaking out.

To which she then says, “Sit back down and stop complaining.”

Which was not probably the best reaction either.

So then, he goes off on her again.

To which she spills a little bit more coffee. (She says accidentally. I’m not so sure.)

To which this time, he unhooks his seatbelt, stands up and starts making a huge scene as the plane is still moving forward.

Eventually the flight attendant takes the PA, gets on, tells him to sit down. He does.

But before the plane pulls into the gate, he tells her how he feels about her.

To which, then she responds by pouring the rest of the coffee on him, and says to him, “If you talk to me anymore or touch me, I’m calling the cops.”

But my reaction to all of this is aren’t they both.

It was the kind of situation that could’ve been resolved with a simple, “I’m really sorry.”

And instead it escalated.

As this was taking place behind me and as the rest of us are trying to deflate the situation, it made me think that sometimes this is not just true for coffee, it’s not just true in work environments, it’s true in marriages, it’s true as we go through TSA lines, and as we’re stressed out to make the next plane, as we drive home during rush hour.

We very frequently allow little infractions to spark us and to agitate us and then we step it up a little bit.

And then we point the finger a little bit, we curse a little bit louder, then we get a little bit more angry, and we think that might make us feel a little bit better, but what it ultimately does, is that it makes the other person feel much more tense and causes them to lash out at us.

My friends, we can’t always choose when coffee gets spilled on us (once or twice or a third time), but we always have the freedom, whatever that coffee may be and whoever it may be spilling it on us, to choose how we react.

It’s a really big deal to consciously, intentionally choose how we react to the things taking place around us all day long.

We get that choice. Do not give that away to anybody else holding the coffee or pointing the finger at you today.

You get that choice. Own it.

This week on the Live Inspired podcast, I had the honor of introducing and interviewing a gentleman named Steve Grant.

Steve is a friend. He’s been a friend of mine for almost a decade.

Out of every podcast we’ve done, out of almost 120 or so, probably the podcast that I’ve received the most favorable feedback on is this one.

It is so full of tragedy and life and mistakes and redemption and a conversation that needs to be taking place in the community right now about drug use, about the pandemic, about the epidemic that is sweeping the nation, that is claiming 72,000 lives a year.

People who are not owning the great limitless possibility of their lives and making a wrong turn forward.

Well, it’s about waking up and making sure that we individually and collectively make the right turn.

Steve Grant is an expert because this infliction has affected his entire family.

He lost a son to this drug use. He’s a normal guy who lost his son.

And then unbelievably and tragically, he lost his only other surviving son to heroin use.

It has affected his family, but the story he shares is not one only of tragedy and sorrow, but one of hope and redemption and possibility for all of us to move forward in a better direction, individually and collectively.

Check it out anywhere you pull down your podcasts.

You will love this one. It will inspire you and it will fill you with hope because what Steve knows and what I know is that the best days are not behind us, but remain in front of us.

So my friends, from sunny Florida (I gotta get out there. I gotta get my swimsuit on, so I gotta go right now.).

But Jim and Abby and Beverly and Kathy and Sandra and Katie, and everybody else who’s tuning in right now, and those who are going to tune in later on, thank you for being part of our Live Inspired community.

And thank you for choosing to Live Inspired today.

So for this time, and until next time, this is John O’Leary.

And today is your day, friends.

Put the coffee down.

Sit back in the seat.

Put the smile back on your face.

See you next time. 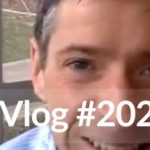 Live Inspired Vlog 202: We Don’t Have to Like EveryoneVlog 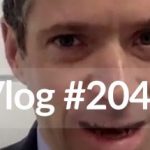