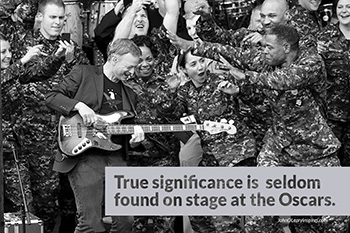 John O’Leary shares how Gary Sinise (and his dedication to veterans) is an example of a radically inspired life.

That’s how much space Wikipedia dedicates to the service Gary Sinise has invested in our military and their families.

Several dozen paragraphs, however, are dedicated to celebrating his many accomplishments as a writer, director, producer, business owner and actor. It includes his milestones for acting, running the famous Steppenwolf Theater in Chicago, producing Of Mice and Men, and his breakout portrayal of the bitter, angry, broken, and eventually lovable Lt. Dan in Forrest Gump.

Gary Sinise’s impact goes far beyond his work in Hollywood.

Gary has won awards for his work and enjoys the benefits of being a Hollywood A-lister. And yet, the work he is most proud of, the work that has touched countless lives and made him one of the most beloved heart-led leaders in our country, is not the work he’s done in Hollywood. No, it is the work he’s done for our troops, first responders and their families.

You see, Gary Sinise’s life changed when he played Lieutenant Dan in Forrest Gump because it led him directly to his calling: Championing veterans and ensuring their sacrifice and service are never forgotten. To do this, he started the Gary Sinise Foundation which includes:

Through his continuous, selfless efforts, Gary is now an Honorary Chief Petty Officer by the US Navy, Honorary Marine by the US Marines, Honorary Battalion Chief by the New York City Fire Department, George Catlett Marshall Medal by the US Army (selfless service to the United States), Sylvanus Thayer Award at West Point (given to a civilian whose character, service, and achievements reflect the ideals prized by the US Military Academy) and the Presidential Citizens Medal.

[Gary’s new book, Grateful American, is an instant New York Times bestseller, beautiful read and celebrates the litany of reasons he’s grateful. Want a moving reminder as to all the reasons you should be grateful too?Gary joined us on the Live Inspired Podcast to discuss his gratitude, life and book. Check it out here.]

Few reveal what is truly important in life more beautifully than Gary Sinise.

Gary is obviously pleased with the successes he’s enjoyed in acting. He appreciates the work, loves the craft, and enjoys telling stories through his roles. He’s quick to add, though: “My life’s work has turned into so much more than success on the stage and screen. I’m hopefully much more than an actor.”

My friends, our professional work matters. And how we show up, the way we perform, the levels achieved are all ways to measure our success, our work and our impact professionally.

But true significance is seldom discovered on the stage at the Oscars. Real success rarely reveals itself in a bank account. Authentic, life-giving purpose and meaning typically don’t appear once we’re atop a corporate ladder.  [Tweet this.] | [Share on Facebook.]

Instead, significance is discovered in a life invested in a cause greater than ourselves. Success is found in doing a little more in our lives for others. Joy is unveiled when our lives aren’t just about us. 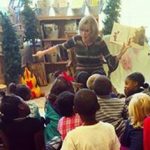 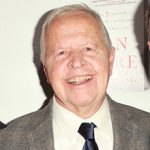 Do They Know?Blog, Monday Morning