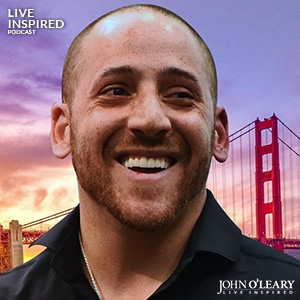 John O’Leary is joined by prominent suicide awareness + prevention activist Kevin Hines and how he’s thriving in pain on the Live Inspired Podcast.

More than 1,700 people have jumped off the Golden Gate Bridge with the aim of taking their own life. Today’s guest is one of the 25 known survivors.

Kevin Hines suffers from bipolar disorder with psychotic features. At 19, he was suffering silently and it resulted in his attempt to take his own life.

Today, Kevin shares about “brain pain” or mental illness and his story of hope, faith, + thriving in spite of it. One of the most prominent suicide awareness and prevention activists, Kevin’s message of striving to live “mentally well” is an urgent one you must hear.

Live Inspired Podcast guest Dese’Rae Stage created a movement to capture portraits and stories of suicide attempt survivors and in doing so – change the conversation, culture, and resources around suicide prevention, awareness, and support. Listen to ep. 156 here.

1. What is the best book you’ve ever read? The Rock Says by Dwayne Johnson

2. What is a characteristic or trait that you possessed as a child that you wish you still exhibited today? Expressing my vulnerability more.

3. Your house is on fire, all living things and people are out. You have the opportunity to run in and grab one item. What would it be? The cross that was gifted to my mother-in-law and then my wife.

4. You are sitting on a bench overlooking a gorgeous beach. You have the opportunity to have a long conversation with anyone living or dead. Who would it be? A young Jesus and tell him “thank you”.

5. What is the best advice you’ve ever received? Mom: Kind, compassionate, loving caring, empathetic and non-judgemental to every person I came in contact with no matter their behavior toward me. Dad: Hard work, because nothing good came without it.

6. What advice would you give your 20-year-old self? You got this on lockdown. Keep moving forward

7. It’s been said that all great people can have their lives summed up in one sentence. How do you want yours to read? Kevin Hines suffered the pain. In spite of the pain, despite the pain, to thrive today so he could have the ability to just try to help other people.

Human trafficking is a massive, worldwide problem. It's estimated that 20 - 40 million people worldwide are victims to this form of modern slavery, and our communities are not exempt.

Today, survivor Rebecca Bender shares her harrowing journey of exploitation and how she's now helping others escape and rebuild their lives. This strong, resilient woman will remind you that the best is yet to come.

My friends, today's conversation is incredibly emotional, important and timely. Listen to ep. 222 at the links below, or wherever you enjoy your podcasts: 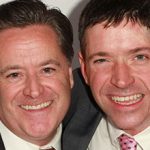 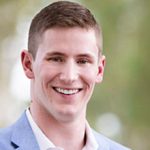