Do you ever have those days where you ask the self-defeating question: Why do I even bother? Sure, sometimes asked in different ways: Do I matter? Do I make a difference?? Does my work here impact anything?!!

The following story will remind you of the impact we make – even if it takes 25 years to realize it.

You may remember that when recovering from burns on 100% of my body as a child, I had a nurse challenge me each day to get up, look forward, and dream again. He was a giant man, bore a striking resemblance to Apollo Creed. He’d get me out of bed, hold me just above the ground, my feet dangling between his, and say “Boy, you will walk again…come on, I’ll go with you!”

That encouragement (abuse?) went on the entire 5 months I was in hospital. Although I wouldn’t take my first step for several more months, it was that one man, his vision, his encouragement that empowered me to walk again and set me on a journey of possibility and purpose.

I had not seen Nurse Roy since being released from his care. 25 years later, the leaders at Alabama Power Company, a client of mine, surprised me by locating him, flew him to our final meeting, and reunited us. You can imagine how stunned I was when I heard his booming voice in the back and then watched as he walked toward me!

Later that day, when the crowds dispersed and the two of us reconnected, he shared he had no idea what I did with my life after leaving his care. He didn’t know I married and had children. What surprised him the most, though, was he had no idea he made an impact on my life; no idea he impacted others as a nurse. He had no idea of the impact his life made on others.

Do you ever wonder what impact you’ve had through you life?

Do you ever wonder what impact you could make through your life?

My friends, I encourage you to watch this video and be reminded again that those who serve others put themselves in line for great wealth, great return, great satisfaction, great reputation, and great joy.

Today, choose to be a difference maker. Choose to tap into the power of one. Choose to actively serve others professionally and personally. Then rest assured with the great return granted those who choose to make a significant impact.

John O’Leary
PS – – you’ll also see in the video an interview of my sweet parents…Alabama Power was thoughtful enough to fly them down, too! The power of one keeps rippling outward!

How Heroes Are Made

“Heroes are made by the paths they choose, not the powers they are graced with.” – B. Ashton (Excerpt from… 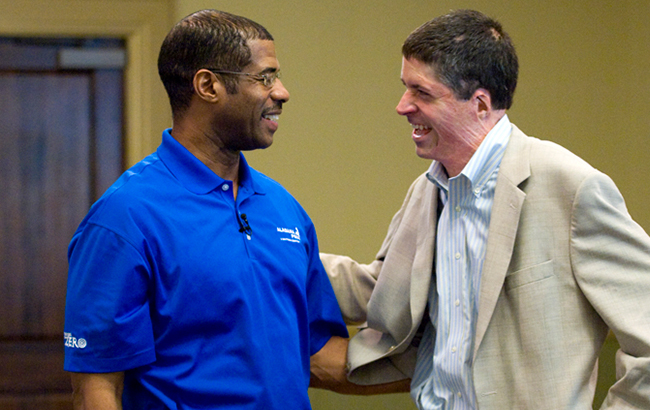 "Today we're going to talk about the power of one. One individual. One action. One impact." The truth that one person…