The White Flag of Victory

“The real winners are not those at the top but those who have come the farthest over the toughest roads. Your victory may never make the headlines. But you will know about it, and that’s what counts.” ~ Earnest Fitzgerald 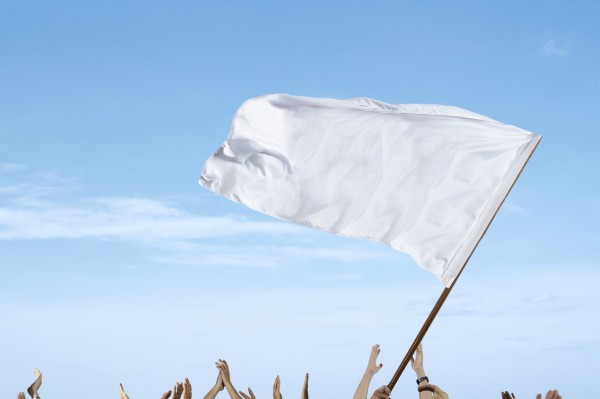 We’re taught as young children the value of winning. We want to be first in line, captain of the team and earn straight A’s on our report cards. Later in life, we strive to get into the right school, land the best job, marry the perfect person, have the appropriate number of children, make the big sales, to get the best promotions, to live in the right house.

But my friend, what if in winning the battles, you lose the war? What if the higher purpose for your life is to occasionally sacrifice for someone else, to let go of your own desires, and to surrender to a higher purpose?

Several years ago I was fortunate enough to speak with The Staubach Company. Their leader, the great Dallas Cowboys quarterback Roger Staubach, started the real estate firm as his football career was ending. He grew it to over a billion-dollar business before selling several years ago. I spoke to this organization and asked the leaders what made them so remarkably successful.

They shared that in the very early days of the company, there was a dispute between two brokers. Both believed they deserved the full compensation for a recent transaction. They brought their grievance to Roger Staubach. He asked a few questions, learned some details, asked how much was at stake and then thanked the two brokers for their generosity. Roger then took the entire commission and donated it to charity.

You see, he believed if two people couldn’t work through an issue like this without both needing to win, that in the end neither should. As they dejectedly left the office, he shared some sage advice. He said that we will either win together, or we will lose together. Business and life aren’t about striving for individual success, but about surrendering to the possibility of collective impact.

My friend, this truth applies not only to commercial brokers while closing deals, but to sales people and business leaders, to nurses and patients, to teachers and students, to parents and children, and yes, even to liberals and conservatives.

A great paradox of life is that in letting go of the desire to not lose, you win; that in releasing the need to never be wrong, you’re right; and that in waving the white flag of surrender to individuals and to purposes bigger than yourself, you become victorious in the most important battle of your life: a life of true significance.

This weekend my family and I will celebrate what we believe is the greatest surrender in the history of the world. I hope this Easter season reminds you of the beauty of sacrifice, the power of surrender and the truth that the best is yet to come!

Can you recall a white flag of surrender you’ve waved? Did you gain a new perspective on a “white flag” opportunity in your life from my blog? Do you have a question about letting go of your desire so that you can support a greater good? Post your thoughts and questions in the comments. I’ll respond to each comment so that we continue this conversation – and journey – to truly lead lives of significance by surrendering to the greater good.

Choosing to Live a Life of Significance We make a living by what we get; we make a life by…

"Our greatest glory is not in never falling, but in rising every time we fall." - Confucius With the Summer…