Diving into the Unknown 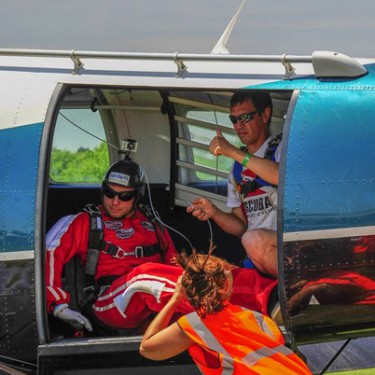 “When you get to the end of all the light you know and it’s time to step into the darkness of the unknown, faith is knowing that one of two things shall happen: either you will be given something solid to stand on, or you will be taught how to fly.” – Edward Teller

Have you ever met someone so passionate about life that her enthusiasm became contagious?

Recall for a moment the passion as she shared about her interest in world travel, joy of her faith, impact of her business or pride in her children.

Do you remember how, through her zeal for life, you felt greater enthusiasm for yours?

I ran into a friend of mine like this last month. Despite the significant hardships he’d experienced since the last time we’d seen each other, he was more on fire for life than ever.

I first met Kevin Burkart after speaking at an event for entrepreneurs from around the United States. During our first meeting I could see his passion for life in his bright eyes, broad smile and warm hug. He shared openly and excitedly about his family, his business, his new girlfriend and his love for extreme adventures. While talking we realized both of our fathers suffered from Parkinson’s disease. Our conversation only lasted a moment, but he’s one of those people that you meet once and are connected to for life.

A few years later, Kevin decided to combine his passion of extreme adventure sports with raising money for Parkinson’s research. I was thrilled to support his effort Imperfect Jumps for Parkinson’s Disease. On the day of the big event, Kevin put his parachute on, jumped into a plane, flew into the air and dove into the abyss. He repeated this 150 times in one day. Kevin raised over $78,000 for Parkinson’s research. I was moved by his commitment to our fathers’ cure and floored that one person could jump out of plane that many times in one day!

Unfortunately, before Kevin was able to make it to his next fundraising event, he experienced his own medical tragedy.

Kevin had an accident in which he broke four vertebrae. The accident also caused severe nerve damage in his left arm; leaving it hanging motionless and in intense pain. Despite enduring surgeries and daily therapy, it’s likely his arm will require amputation.

So what do you do when tragedy crashes into your life?

How do you move forward when the life you knew, the one you planned to live, completely changes?

Kevin responded in the only way he knew: passionately living life and striving to make a difference.

So when his annual Imperfect Jump event approached this June, Kevin decided he would go through with the event. And he committed that this year it would be even bigger than last year’s and he’d attempt to become the first person to make multiple jumps with one arm.

With media reporters, friends, family and Guinness Book representatives gathered, Kevin made his way onto the plane and into the air. With his left arm tied to his body, and only his right arm to guide his chute and himself toward land, Kevin jumped from the plane. While experiencing relentless pain in his arm, he steered himself safely toward earth, raced back into another waiting plane and did it again.

Kevin raised more than $187,000 for Parkinson’s research while safely jumping 151 times. In so doing, he inspired others to rise above the challenges they face. He reminded us all that even when we find ourselves in the midst of great adversity and change, we can passionately, boldly and faithfully thrive forward and impact the lives of those around us as we do it.

My friend, we all face challenges in life and will continue to experience them.

Today I challenge you to focus on your choice to embrace the adversity in life. Step toward the open plane door and look down through the clouds of uncertainty. Know that when you get to the end of all the light you know and step into darkness, you will either be given something solid to stand on, or you will be taught how to fly.

Please share your thoughts in the comments! If you enjoyed this post, make sure you never miss it! Sign up to receive John’s Monday Morning Motivation in by email here.

0 replies on “Diving into the Unknown”

I was very fortunate to hear John speak this past Monday at the Alabama APPA conference in Orange Beach, Alabama. Not only was his story amazing and inspirational but his words brought great contemplation to my mind and everyday living. As a Human Resource Director, his words of “what more can I do?” hit home. Thank you for bringing such joy to my life.

As usual, John, your message not only inspires me but is sent by the Holy Spirit just when I need it most. Having been plagued by health problems and other personal issues much of the year, I have been feeling beat up. I had an exploratory surgery today that did not yield the answers I was seeking. You and Kevin are such an inspiration and help me see that there will be either solid ground or a purposeful flight in this journey, too. God’s blessings to Kevin and his great spirit! Beth Bartolotta

Beth, thank you for your sweet words; they mean more than you know. I will keep you in my thoughts and prayers as you take flight 🙂 Keep igniting your life, Beth, and remember the infinite possibility within you. J

Thank you for this post. Perfect timing and needed looking-glass moment.

Hi, Pam! Glad this post met you where you are today. Thanks for sharing your words of encouragement, they mean more than you know! Take flight & know that the best is yet to come! J

Today we launch our ride with local CACs!
I was praying today for God to keep my motives pure and thanking Him, because without Him none of this would be possible! Thank you for starting my Monday out with just the right perspective!
Lynette / cyclingforkids

See you in St. Louis Lynette! Have an awesome day, stay safe and thanks for choosing to make a difference!!! J