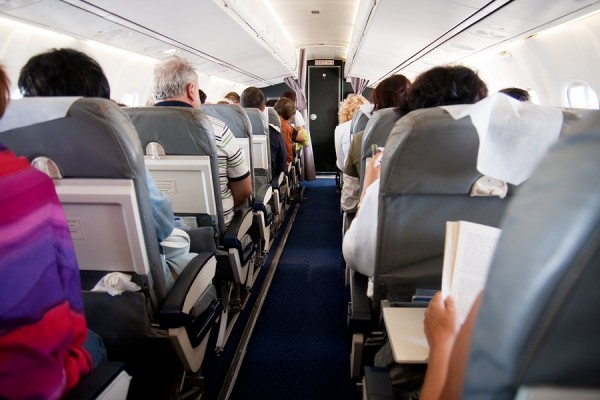 “When we believe in lies, we cannot see the truth, so we make thousands of assumptions and we take them as truth. One of the biggest assumptions we make is that the lies we believe are the truth!” – Miguel Angel Ruiz [Tweet this.]

Do you know what happens when you assume something?

Have you ever proven it to be true?

The assumptions we project onto others speak much louder about who we are than those we pretend to know. [Tweet this.]

I got further proof of this recently. It was my seventh flight in four days. I was worn out, heading home from New York and blessed with an empty seat next to me. Hey, the travelers reading this know it’s the next best thing to first-class! The flight was delayed as we waited for one passenger to arrive.

A woman eventually burst onto the airplane. She carried a massive backpack in her right hand and an oversized handbag in her left; the bags hitting each seated passenger she passed. She appeared disheveled, was sweating, her hair drooped over her face and she emitted the signs of a traveler badly in need of a shower. I was grateful as her bag hit me that was advancing further back on of the plane.

A moment later, I was tapped on the shoulder, looked up, and there she was. “Do you mind if I sit here?”

Struggling to smile I said, “Absolutely not. I’ve been saving it for you.”

I stood up, she sat down and I asked where she was coming from. Her day had begun in Nepal more than 30 hours earlier. She’d hiked, then ridden a bus for over six hours and this was her fourth flight of the day. Mary was a missionary, served food to the poor and worked to educate the women of a small Nepalese village.

The more she shared the more clearly I realized how blessed I was to have a couple hours with her. I get to travel all over the world preaching love, purpose, action and how one person can literally change the world. And here was a woman who was actually living it.

I learned about her amazing experiences, her strong faith and that she was coming home for a funeral. She was returning to mourn the death of the woman who taught her how to really live: her mother.

My friends, this month we focus on the idea of “ENOUGH.”

“Enough” means embracing that what we have is really all we need. [Tweet this.] It also serves as a proclamation to stop advancing toward things that don’t matter. Enough!

My challenge to you today, this week and going forward is to say “enough” when you hear yourself making assumptions. I encourage you to yell out “enough” to judging others for not fitting into a little box. “Enough” when assuming your way is the only way. “Enough” to being too busy, self-absorbed or arrogant to fully open up to the possibility alive and well within every person and experience.

My hope for you is that before you move onto to the next email, meeting or task: you’ll embrace the gift of “enough” in your life.

Share: Can you think of a time when you negatively assumed something about a person, a group or an idea only to discover how wrong you were? Can’t wait to learn from you. Please post below in the comments.

John, it has been a while, several years. I lost my 24 year old beautiful daughter , Dawn, over 8 years ago, Which I have shared with you in the passed. I would like to share with you what — My neighbor Roseann does, she remembers My Dawns Birthday and put Butterfly balloons in Dawn’s flower garden,. every year for the eight years. It means so much to me, that someone remembers her other than me. I miss my Dawn so much, and I know that the worst fear that we have as parents that our child as died is they will be forgotten. I will never forget My Dawn, and I know Roseann remembers. THANK YOU ROSEANN,

What a gift Dawn’s spirit is and what a gift to have your neighbor celebrate it with you each year! Thank you for sharing this beautiful story and for such a great example of “the power of one” – that each of us can have on each other. J

What a terrific way to start the week, thank you very much. I almost passed on opening your email at this time, assuming it was one I could revisit later in the day or week. And then I remembered the impact of your recent Launch Leadership Renewal Conference … thanks, and have a great day. Peace.

Thx for spending time with me and the RA community this AM & for sharing your sweet words, Robert. I know life feels too busy sometimes. Looking forward to seeing you at LAUNCH in November – heard the good news that you’ll be with us again 🙂 J

This is not MY personal story but one from a member of my AA group I meet with on Wednesday nights. There is an older lady that is so wise and has taught me so much in my 2 years in the program. She told us a story recently that she attended a funeral of an older gentlemen and was in the back of the church before services began and a young man walked in with a fedora hat on his head. She was appalled that this young man would be wearing a hat in church and immediately thought the younger generation had no respect for the “rules” in church. She was somewhat disgusted at this young man and did not even know him. After the services began, this young man, in the fedora hat, walked to the podium to speak on behalf of his loved one and it was during that speech he referred to the HAT COLLECTION that the deceased was so fond of. He was wearing one of these hats as an honor and tribute to the man he loved. My friend told us about her own ignorance and was brave enough to share her story in our meeting and admit that her immediate judgment of this young man was out of line.

We have found freedom in our own humility and from these lessons we work towards a better tomorrow on loving all as we are commanded. You just never know what someone has been through or experienced so hopefully we learn from the stories that are shared and go out and be the best person we can be both through SERVICE and LOVE. Be kind. Be the light. John, thank you for your service and inspiration. You are a true gift and a shining example of these very things.

Sara, thanks for sharing your friend’s story. What a sweet tribute to this man. And what a great reminder for us all. Have a wonderful day and enjoy loving everyone you meet 😉 J

Roughly 14 years ago this fall, I met a young woman – expertly dressed and full of energy and personality – on the first day of my Child Welfare Policy class in my graduate program. My first class of the morning after commuting 2 plus hours to campus, I was comfortably dressed in athletic pants, a sweatshirt and running shoes. I was not bubbly nor full of energy. In fact, I was still waking up from my morning snooze sitting on the floor of an overcrowded commuter bus. I watched everyone as we went around the room introducing ourselves and when we finally got to “A” she stood up and began telling us about herself. As she went on full of life at 0830 hours I thought there is no way in the world you will ever have anything in common with that girl besides this class. We hardly exchanged words during the first several weeks of class – she was always dressed to the nines while I looked like a slob. Comfortable but a slob. She was always so bubbly and energetic. I was not – a four plus hours round trip commute can really suck the life out of a person.

One morning as our Professor was discussing an assignment I raised my hand and inquired if I could submit it via email since I would not be in class that particular day. Before our Professor could reply, “A” turned in her seat and offered to submit the assignment for me if I would email it to her. She said she could print it out and place it in the required portfolio for me. That small, seemingly insignificant gesture led to many conversations between the two of us and over the course of the next several months a beautiful friendship blossomed. Now almost 14 years later, “A” is truly one of my dearest friends. We’ve lived in different time zones and even in different countries yet our friendship remains. We can go months without talking to one another and even years without seeing one another yet the moment we reconnect it’s as if no time has passed at all. I am so terribly thankful I was flexible enough to reconsider or reevaluate my thoughts about the kind of person “A” was that one morning so long ago…….I simply can’t imagine life without her and her bubbly personality in it. My life is so richly blessed by her gift of friendship.

It is truly amazing what can bloom from acceptance, an open heart and an open mind. Thank you for sharing your story, Trishia! J

John, Great reminder to all of us making assumptions in today’s busy, instant analysis world…..

We are all guilty of it, Robert! But awesome to think of the freedom that would come with letting go of assumptions! Thanks for taking the time to share and for all you do. J

John,
I think this is a struggle for many people. When I had the opportunity to meet you a couple years ago, I actually had an assumption run through my head: This guy (you) seems to be so genuine and I can see Jesus working through him. Why on earth is he spending time with this guy (the person who hosted you). See I thought either you would bring him up, or you were also a fraud. The reputation that this man had was staining you in my eyes. I did not know it at the time, but I struggle with legalism. Much assuming can come from using the Holy Word as a judgment on others. I am working on an amazing Bible study, Breaking Free by Beth Moore. This email could not have come at a better time. Assuming the worst or anything negative about people can become a chain satan has you dragging around. Jesus has come here to set the captives free!!! Thank you for helping me stay on track to my freedom.

“Assuming the worst or anything negative about people can become a chain satan has you dragging around. Jesus has come here to set the captives free!!!”

AMEN brother! Keep up your work on that bible study – sounds like a true gift. Thanks for sharing, for your honesty and for all that you do! J

“Never doubt that a small group of thoughtful, committed citizens can change the world. Indeed, it’s the only thing that…