“Heroes are made by the paths they choose, not the powers they are graced with.” – B. Ashton 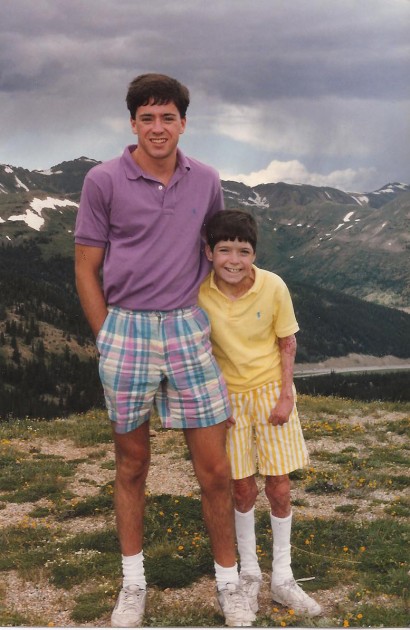 Growing up my brother Jim was my hero. He was cool, wore corduroys and could play the first half of Stairway to Heaven on the guitar. I wanted to be just like him.

Yet, he wanted very little to do with me.

He was a typical teenager! A bit self-centered, striving to discover who he was and had little time to spend with his kid brother.

That day, Jim awoke from a deep sleep in his basement bedroom to the sound of an explosion, smoke alarms and his brother’s cries. He stumbled up the dark staircase, searched through the smoke and saw me in the front hall with flames leaping three feet off of my body.

Jim picked up the front door mat, beat the flames off of my body, wrapped me in the mat and carried me outside. He lowered me onto the snow-covered grass, yelled at me to keep rolling around and then raced back into the smoke-filled house. He called 911, reported the fire and told them to send an ambulance. After hanging up, he went room by room in a dark, smoke-filled house making certain everybody, even the dog, was outside and safe.

He woke up. He saved lives. And he became my hero.

So how do you wake up this amazing catalyst to transform your business, your relationships and your life, my friends?

Part of waking up means to stop spending our lives in the future. A focus steeped in tomorrow generates stress, worry, fear or the sense of being totally overwhelmed. The question that hangs continuously over individuals living in the future is “What might happen next?”

On the opposite spectrum are individuals living in the past. The emphasis on yesterday has dire consequences, too. Living in the past smothers us with a sense of missed opportunities. Difficult childhoods, past mistakes, broken relationships, lost dreams, wasted potential. The perpetual backward glance leads to bitterness, guilt, blame or anger. We live in the painful place of repeatedly asking the question “What could have been?”

My friends, the calling for great leaders is to wake up to the present. The opportunities they embrace that empowers them is to come alive to the great now. The question these leaders ask is “What more can I do now?”

Everyday presents small opportunities to be a hero for someone else. [Tweet this.]

The key is stop waiting for Superman to show up tomorrow. You see, real heroes seldom wear capes. They’re typically ordinary and courageous enough to say YES to moment.

At age 17, Jim O’Leary was an unlikely hero. He was not necessarily graced with the characteristics we’d attribute to great heroes. Pale, skinny, and freckled, he awoke from his sleep and saved my life.

Today, wake up the hero within you. The best is yet to come. Starting NOW!

0 replies on “The Unlikely Hero”

Heard you this week in St. Louis Scentsy Reunion you have really motivated me with my business and life. Thanks for coming!!

My unlikely heros were 3 men finishing up their day working on the local highways. They were on their way back to the station to finish up for the day when they saw my car accident-I went off the side of the road from a curve, hit a culvert which sent my van into the air to take out a telephone pole. I saw them coming down the road-I knew I was going to be safe as I prayed for God to protect me. He did with these men. One of the men, Steve, was a volunteer firefighter. They had to pull me out of the van since the gas tank was punctured and the electric lines were snapped and my van started to smoke. They carried me onto the pavement far from the van and for what seemed like a long time, Steve sat and held my head in case I have damaged my neck-I was blessed by being able to talk with him until the ambulance came and put a neck brace on me-again, blessing of Steve-the rookie had put it on backwards. I did not break anything in my neck but lumbar vertebra L1 wasn’t so lucky. Steve had no cape or superpowers except the heart of wanting to help others.

I am already signed up for your newsletter-thank you so much for sharing your life with us and your family’s life with us.

what a beautiful, heroic story — april. thank you for sharing it with us! so glad you were blessed that day with steve. J

I heard you speak at a Georgia Hospital Association conference at Lake Oconee in June. Great message and what I needed to hear! Very inspiring for anyone, but in a special way for those of us in health care…

Listened to your mother speak & bought her book.

John, you and your brother look a lot alike! Great story, and I’m sure it touched your whole family. Gave me goosebumps.

What a wonderful story and beautiful picture of the two of you.

Thank you Janet — keep being a hero!

I was pleasantly surprised to see you face in my email this morning. A big Smile popped up. I just heard you speak for the first time at CharacterPlus in StL.
I bought your moms book because I wanted her version of the story! I’m a mom!
Today’s blog put my mind back on track, the future is constantly worrying me. Your words reminded me….what more can I do do today! Thanks John!

Thanks Brenda….and LOVE what you do and the way you go about it! Love Wins! Have an awesome night — and enjoy your summer –

Hi Hal — so glad we got to spend time together at Leading Age! Thx for sharing The Power of One with your team, please do share the Monday Morning blog / newsletter (they can sign up at http://www.risingabove.com/monday-morning) and I encourage you to check out my Ignite Life Today program — many of my clients’ teams have had phenomenal team success: http://www.ignitelifetoday.com/corporate/

Great post John. This is an inspiring story, which made me think of the many children who desperately need a hero in their life, and have no one. They feel alone, unloved, and like they don’t belong anywhere. We encourage teaming the youth with the elderly to encourage the elderly to share their wealth of expertise and knowledge, and the youth to share their technological skills and inspiration with the elderly. he elderly hold a library of lost information, if we don’t pass it on. We all need each other.

Connie — what inspiring work you do! Thanks for ALL you do and for sharing your story, and helping the elderly share theirs and giving youth the opportunity to hear it…you are a gift. J

Hi John! Your Aunt Janie was my best friend and I grew up in her home. When we were in eighth grade, my single mom struggled to figure out how to send me to a private high school. We went back and fourth always discussing tuition. In the end she asked me if money were not an issue what school would I pick first? It was easy and I responded St. Joe. She expected that answer but asked why. That was even easier. I said because Susan Kilker goes there and I want to be like her! My mom found a way, and I joined Janie’s class. Your mom chose me to be her little sister! My mom shared later that my reason for choosing St. joe was good enough for her! Susan and Janie, even Kaddie have heard this story, but I thought you would like it too! My family prayed sooo hard for you, and we are all soo proud of your hard work! Love, Terri (Sanguinette) Hauser

John, I saw your presentation at Leading Age about a month ago. I got one of your DVD’s and am sharing it with my management team today at 12 noon. I think that I will continue to share your e-mails with them also.

Hi Hal — so glad we got to spend time together at Leading Age! Thx for sharing The Power of One with your team, please do share the Monday Morning blog / newsletter (they can sign up at http://www.risingabove.com/monday-morning) and I encourage you to check out my Ignite Life Today program — many of my clients’ teams have had phenomenal team success: http://www.ignitelifetoday.com/corporate

How to Be a Hero

“Heroes seldom wear capes.” – John O’Leary, ON FIRE “Who’s your favorite?” My boys recently asked me this question. We…

Who's Your Hero? (And, more importantly, does she know?)

When we were little, many of us subscribed to the idea that heroes wore a badge and a uniform or…