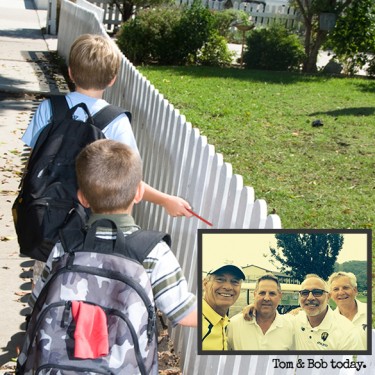 “I have learned that there is more power in a good strong hug than in a thousand meaningful words.” – Ann Hood [Tweet this.]

We met in a boardroom.

He came in with a big smile. After short introductions, we started talking about business.

Tom Manenti is the Chairmen and CEO of MiTek. It’s an arm of the Berkshire Hathaway family of businesses. His boss is someone named Warren Buffet. (Yeah, I’ve never heard of him either!)

The more we talked business, the more we realized it wasn’t just business that motivates us.

It’s a love of people. Focus on mission. Desire to inspire others to live up to the fullness of their potential.

We finished our meeting talking about family, faith and our inflection points, or the moments in time that change the course of our lives.

For Tom, it was losing his mother when he was just nine-years-old. He remembers most vividly the first day back to school after the funeral.

As a 4th grader at Middle Road Elementary in Hazlet, NJ, he was totally overwhelmed with grief. No one knew what to say, so no one said anything. Everyone in class pretended it was just another day.

The final bell rang. The kids grabbed their stuff. They raced out of the classroom toward their homes; toward their families.

This day Tom walked home with a classmate named Bob. The two friends walked together in silence. Tom was too sad. The woman who always greeted him at the front door, would not be at home today. Or ever again.

When they got to the corner where they parted ways, Tom kept his head down as he continued towards his home alone.

After a few steps, Tom looked up. To his surprise, Little Bob was standing in front of him. He looked Tom directly in the eyes, and gave him a big, sincere and much-needed hug.

No words were exchanged.

That was more than five decades ago.

The boys grew up. They got through school, started jobs, grew businesses, moved states, raised families and enjoyed life.

Last summer they reconnected with old friends for a weekend of golf. At a quiet moment, Tom brought up that day back in 1960. They’d never discussed it. Tom asked if Bob still remembered it.

Difficulty, challenge, strife and loss are absolutely part of life.

Hopefully this story reminds you that it’s seldom the wisdom of the words we speak and much more frequently the gift of the time we spend, the love we share and the hugs we give. [Tweet this.]

Keep your head up and seek opportunities to give away good, strong hugs.

Stay on fire and live inspired.

Hi, I was at a Scentsy Reunion and heard you speak, loved how inspiring you are, and would love to hear your inspiring videos.

Hi Nancy – thank you! I have loved my time with the Scentsy family. I post an inspirational video every Wednesday on this blog — and I also share it on Facebook: https://www.facebook.com/JohnOLearyRisingAbove

Thx for being part of my community of inspiration seekers and for ALL you do! J

I’d like to thank Wayne for forwarding this to me, good stuff.

please sign me uo for the Monday morning newsletter

You’re in! Look forward to this coming Monday morning, my friend! J

I was just forwarded your Monday Motivation – I’m in.

You’re in! Look forward to this coming Monday morning, my friend! J

I love this, it is so true. Thanks for reminding me.

Thx for taking the time to be reminded and for ALL you do! J

"The most powerful weapon on earth is the human soul on fire." Marshall Ferdinand Foch Often we feel ineffective or…

Every Ending is a New Beginning

"All endings are a chance to rest, to breathe, to reflect on the conclusion of a journey in preparation for…