Skip to content
Home | Blog | Rethink What is Impossible
Monday Motivation | May 4, 2015 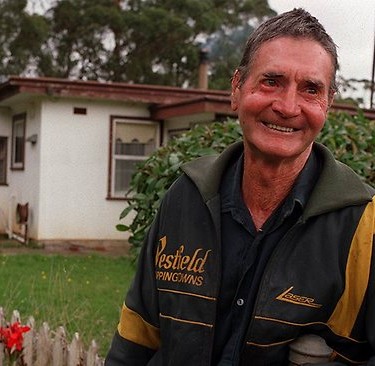 “You don’t need to know precisely what is happening, or exactly where it is all going. What you need is to recognize the possibilities & challenges offered by the present moment & to embrace them with courage, faith & hope.” – Thomas Merton

There is an ultra-marathon that was run each year between Sydney and Melbourne.

The runners are supported by a team, they run for 18 hours, sleep for 6, wake up and run again. For a freaking week!

Which is why the sight of a one particular man at the starting line was so unexpected.

In 1983 Cliff Young arrived at the race to compete. He didn’t prequalify, didn’t pre-register, and didn’t look the part. The organizers told the man he could not race.

Young explained that he grew up herding sheep, never had help on the farm and certainly wouldn’t need help in the race. The 61-year-old, far from a traditional ultra runner, shared this sentiment while wearing a serious face, a pair of blue jean overalls and large rubber boots. This is what he wore on the farm; it was what he would wear in the race.

The organizers allowed Cliff to run.

The race began and he immediately fell behind.

One race official and Cliff’s trainer, his 81-year-old mother, stayed back with him.

Keeping a steady pace, he amazingly ran for 18 consecutive hours like the other competitors.

But while they all rested, Cliff kept running. No one explained to him the typical manner to run the race. No one explained it was impossible to keep running. So the 61-year-old ran on in the only manner he knew: until the race was finished.

By the time the other racers awoke in the morning, Cliff, his mother, and one observer had trekked past them. The other runners and organizers were more entertained, than concerned. They knew no one could keep that pace.

They may have known what was impossible, but Cliff did not.

The farm boy with rubber boots ran for five consecutive days. He did not stop. He did not sleep. And he beat the previous record for the race by almost two days.

Upon crossing the finish line Cliff was greeted by adoring fans who had been following his stunning progress. He was also greeted with a medal and a check for $10,000. He explained to the organizers that he didn’t run for money and asked they split the check among the competitors still running.

So my challenge to you, as the race begins this Monday morning, is to answer this question: What have you been telling yourself just won’t happen in your life?

Today is the day you silence that voice in your head, grab your rubber boots, throw on the overalls, quit making excuses and begin running the best race of your life.

Maybe today is the day to realize that regardless of mistakes and missteps of yesterday, the best is yet to come.

Have you ever experienced doing something that you had once thought impossible? If so, please share in the comments below to inspire us all to rethink the impossible.

0 replies on “Rethink What is Impossible”

Keep us in your prayers: I left my job to care for my spouse who
suffers from problems from Radiation for Melanoma. Many blessings
have come from this….I know I
will find a great job when the time is right.
Lisa in Columbia, MO

You are in my prayers! What a blessing to be able to be with your husband – enjoy the small joys today. The best is yet to come. j

At the age of 15 I was pregnant and expelled from my Catholic high school. I vowed to myself I would not be “bare foot and pregnant all my life” as the principle told my parents I would be. At 18 I was one of the youngest to graduate from my LPN program, then went on for my ADN. I now have a BSN. I spent 26 years in management at a highly respected pediatric hospital continually and quite successfully mentoring others to achieve their goals. My fire is still burning and I have no regrets 🙂

Sounds like you continue to live a truly inspired life. Thank you for sharing and for ALL you do, Joyce! J

Hi About ten years ago I attempted the three peaks mountain challenge, trying to climb three mountains within 24 hours. I completed Ben Nevis and then moved on to Scarfel Pike. Part way up I was in agony and could not continue. I was later diagnosed with a massive extensive tumour in my spine, and would be paraplegic.

I was determined it was not going to beat me, but feared the extent of the surgery would mean I would never walk again, let alone climb the stairs.

About 2 years after the operation Gemma took me back to Scarfel Pike, I was really worried but determined to try my best. Together we worked our way to the snow covered top.

Glen – beautiful story, brother. Thank you for sharing — keep living that amazing life. You are a role model for us all. Thanks. J

I have been having serious problems with both knees. The doctor say I need both knees replaced. I have had a series of injections and I have to use a cane on some days. I am hanging in there and hopefully the injections will work and bring me some relief. I hope to put off surgery and I am pushing myself to be positive. please pray for me

What a way to start a Monday morning! Food for the soul.

…thank you for this – this Monday morning. I needed this message!!

An old expression goes that "People with great purpose and passion can make the impossible possible." Last week, I met…