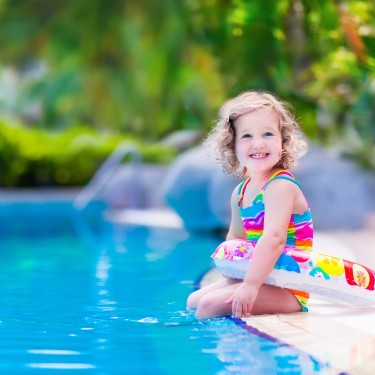 “Only those who dare to fail greatly can ever achieve greatly.” – Robert Kennedy [Tweet this.]

After an unusually mild summer in St. Louis, last weekend brought with it a return of heat and humidity and the opportunity to take my kids swimming.

Keeping an eye on my older three sons, I worked with my daughter on jumping from the side of the pool into my arms. Since Grace had just learned to swim, this was a bit scary for her.

With her blonde, wet hair dripping and her her pouty eyes looking at me she said, “Dad, I don’t think I can. What if it doesn’t work? What if I fail?”

These words were shared by a nervous three-year-old.

Moments later she ignored her own question, took the massive risk, left the safety of the pool deck and jumped into the water, into my arms. Successfully.

Let’s review these words: “I don’t think I can. What if it doesn’t work? What if I fail?”

Don’t we also use these words to explain why we don’t take chances in life? These words ultimately crush our ability to truly thrive in relationships, professionally and in life.

Today I am giving you three life-giving thoughts to replace these possibility-crushing ones:

My friends, leading a radically inspired life requires not just the willingness to dare greatly, but to know that when we fail – and we will fail – to remain positive in spite of it, learn lessons from it, lead better because of it, and be confident regardless of it.

3 replies on “Dare to Fail Greatly”

this week’s Monday morning newletter was just what I needed!

Excellent post John! Thank you for sharing Grace’s words with us – is the proverbial “from the mouths of babes.” I am living inspired 🙂

On this week's Live Inspired Podcast Monday Moments segment, John O'Leary shares a story of a young man who dared…

"Perseverance is failing 19 times and succeeding the 20th." - Julie Andrews At a BBQ last weekend a friend’s 10-month-old…

“Sometimes you gotta lose [before you] find your destiny.” - Jon Gordon Ever notice that advice about personal achievement tends…