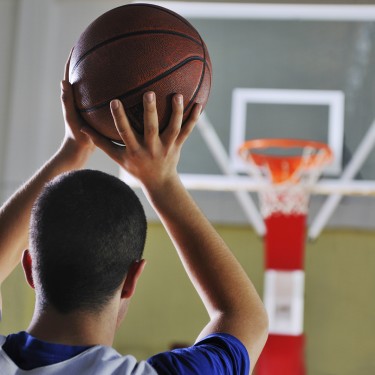 This a common question asked by parents to their children upon returning home from youth sports. Typically followed by, “Did you score?”

Not that it’s unimportant to win or insignificant to score, but I recently witnessed a beautiful example of what real victory and true scoring looks like. Let me explain.

In El Paso, TX there is a high school called Coronado. Their boys’ varsity basketball team was ranked number one heading into the final game of the season. They had a wonderfully athletic team, a strong head coach and a secret weapon: their team manager with developmental delays named Mitchell Marcus.

With a little over 90 seconds left in the game, Coach Peter Morales called over his manager. The coach looked at the unsuspecting young man and told him to take off the sweatshirt, get off the bench, and get into the game. Mitchell had never before played in a competitive basketball game.

He smiled broadly, ripped off the sweatshirt and sprinted onto the court.

Coach Morales shared later that his goal was to just get Mitchell playing time, but his teammates wanted more: they wanted him to score.

With 10 seconds on the clock and the opposing team in possession, the unlikely dream of Mitchell scoring now seemed an impossibility. And that’s when this story gets really good.

Jonathon Montanez, a senior on the opposing team, keenly aware of what was going on, yelled, “Hey, Mitchell.” Mitchell turned, and the opposing team captain passed him the ball, Mitchell caught it, dribbled toward the hoop, took a shot, the buzzer sounded…and the shot fell perfectly through the hoop.

The high school gymnasium went crazy. Both sidelines charged the floor to celebrate.

The beautiful thing about this story is that when both boys, from opposing teams, went home that night and were asked the two a fore mentioned frequently asked questions, they were both able to respond: yes, I won. And yes, I scored.

Today, and each day, we have an opportunity to pursue individual success, to score points, to tally wins. And yet, true significance reminds us that while striving to become the best version of ourselves, we must also choose to fight for victories and points that live on long after the scoreboard is reset and the bleachers are emptied.

This is your day to coach like Peter Morales, to pass like Jonathon Montanez, to score like Mitchell Marcus and to live on fire for life.

How to "Win the Lottery"

Bitty & Beau's Lesson on Success Last night, I had the chance to teach my kids a game my dad…