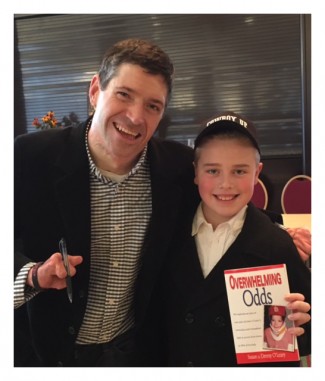 “It has long been an axiom of mine that the little things are infinitely the most important.” –Arthur Conan Doyle, The Memoirs of Sherlock Holmes

It was a simple enough question. Except for where we were, who was asking, and the simple act of courage about to be displayed. Let me explain.

I was preparing to speak to almost 800 leaders from Mortenson Family Dental in Louisville, KY. To ensure there would not have to be any awkward moments during the 90 minute conversation, I visited the restroom ahead of time.

After washing my hands I reached for a towel, struggled grabbing onto it, and then heard the above question come from behind me.

Turning around, I saw a young man, maybe 11. I thanked him and said I’d love a towel. He grabbed a couple and handed them to me. Thanking him again, I asked his name.

He then extended his hand to shake mine.

He gave me a firm handshake, making eye contact the entire time.

My friends, here’s an 11-year-old kid, in a crowded public restroom, slowing down, paying attention, seeing a need, and taking action to make a difference. Here’s a kid shaking the hand of a guy he doesn’t even know…and a guy who doesn’t even have fingers!

As we spoke while walking back toward the conference area I thought of times that adults saw me struggling with something, and opted to put their head down and walk on. I thought of a time when I dropped my change at a crowded Starbucks. Coins flew everywhere. I got down on my hands and knees, struggled mightily picking them up one-by-one, as fellow customers stepped over me to order their drinks.

I thought of a time in church when I went to shake hands and offer peace to a stranger in front of me. The man turned, faced me, extended his hand, saw mine, quickly pulled back his hand, turned around and crossed his arms. I was 12. I remember it vividly to this day.

He reminds us to step into every situation, every day, on fire with love rather than fear. And he reminds us that the little things matter profoundly and are infinitely the most important.

So as you begin your day and enter into your week, keep your eyes open, your arms uncrossed, and your heart on fire for others.

When has someone uncrossed their arms, took action (big or little!) and made a difference in your life? Share in the comments below and I’ll randomly pick the author of one comment to receive an autographed galley copy of my new book, On Fire.

7 replies on “Uncross Your Arms”

Hey guys its me Ben Mortenson and i am now twelve and going to North Oldham Middle school. I try to help my mom out with the eight kids she has to watch all day including two babies. At school I help out with the special kids at school. They are so sweet and always making me laugh. Always help out with however it is who is in need. God will give you blessings for it and it will make you feel good inside. Remember, always keep your arms uncrossed.-Ben Mortenson

I uncrossed my arms this week and how rewarding it was.

I was sitting in the mall gobbling a bite to eat before intending to rush back to work for the afternoon. A lovely young poised female approached my table and asked if she could sit with me. I raised my head with some annoyance wondering what she wanted and expecting her to attempt to sell something to me. She had nothing to sell. She had recently arrived from India and noticed me reading. She has a degree in English literature and loves books. She was homesick and lonely. She was looking for work and struggling. Her parents were supporting her endeavours in the hopes she could find a better life here. We chatted and I was able to help her in a variety of ways with information and pointers. Time flew by and before I knew it she was saying goodbye and thanking me. She told me that she felt she had made a friend and we didn’t even know each other’s names. She told me that I had re-energized her to stick to her goals and gave her back her confidence in knowing that she would succeed. I left the mall strolling back to work feeling amazed. Showing kindness is so important and so rewarding.

John
Thank you again for reminding me what is the “important” and the person I want to be! Great for my Monday!

The visual of uncrossing your arms is perfect: you can’t help someone with your arms crossed! I have 2 boys, 2 years apart. When they were in a stroller and we were going out and about, I was amazed at the number of people who would go to another door rather than be helpful by holding the door open for me. I made a commitment that I would always hold the door for a young mom with a stroller…or someone else who needed assistance- and I have. This past week, I had to carry several very heavy boxes into the post office. I was so grateful for a couple who volunteered to carry a box each into the office for me- and then helped me move them when I got to the head of the line! What a blessing!

I have a spirited but very intelligent boy. In kindergarten and 1st grade he was always going to the office. He’s kindergarten teacher even told me she has seen other kids like him and unless he changed he would create a lot of problems. For himself. Then came 2nd grade and Mrs Larkins. She gave him time to be by himself , she did yoga with the kids. And at the end of the school year when I told how much I appreciated her patience and understanding towards my son Trevor she said “oh it was fine because someday she knew Trevor would do something great like cure aids or something and then she could say she had him in her 2nd grade. Hearing such a positive thing about my son has helped me look at him in a different , more positive way, and brings tears to my eyes when I think of what she said. Thank you Mrs Larkins.

I use an electric wheelchair, and I was at the Scentsy convention. I had transferred into a chair, so my wheelchair was empty, but I was parked against the flow of traffic. It’s super crowded and I was essentially stuck where I was until the area cleared some. This is not a big deal, it’s a part of my every day life. I’m patient, No big deal. Everyone I came with left me, but a young couple named Rodney and Sam noticed me and helped turn my chair around and cleared the way for an easier transfer. It doesn’t sound like any big deal, but they SAW me. They HELPED me, when everyone else was focused on getting to lunch before the restraunts got too crowded. The beautiful part of the story is yet to come. Rodney and Sam did this for me, a stranger, EVERY time they left the convention venue. I will never forget their kindness.

You are a huge inspiration. I saw you ar Sacred Heart Church in Valley Park years ago. Will never forget it.