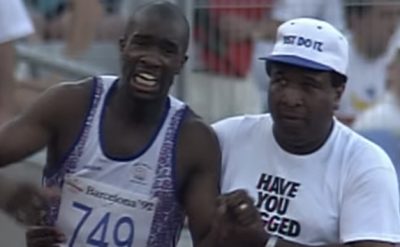 “Our greatest glory is not in never falling, but in rising every time we fall.” – Confucius

With the Summer Olympics approaching, I’ve been reminded of my favorite Olympic moment.

No, it’s not courtesy of the men’s hockey team, Mary Lou Retton or even Michael Phelps and his repeated victories in the pool.

British runner Derek Redmond’s performance would be immortalized during the 1992 games.

Just not at all in the manner in which he expected.

In the first round of qualifications, Redmond posted the fastest time. In the quarter-finals, he won his heat. And when the day arrived for his semi-final race, Derek spent the morning with his hero, his dad Jim. They discussed the amazing journey to this point, the injuries and challenges that had been hurdled in getting there, and agreed that no matter what happened that day, Derek would finish strong.

When the pistol sounded, Derek raced to an early lead. He remained out front with a packed stadium – and his dad – cheering from the stands.

But then it happened.

There was a pop in his right hamstring. Derek Redmond’s beautiful running cadence transformed to a grimaced man grabbing his leg, bouncing on one foot trying to move forward and then falling onto the track.  Knowing that a similar injury during the Olympics four years earlier had ended his race, his father’s heart sank.

Derek Redmond got up. He began hopping on one leg trying to finish the race. He fell repeatedly, would get up, hop a few more steps, and fall again. As he lay there, clutching his hamstring and squirming in agony, medical personnel come running to carry him off the track.

As the medical crews reached Derek, he screamed, “Get back … I’m going to finish this race!”

Derek Redmond then lifted himself up and started hobbling down the track by himself.

Although the race was over, the stadium realized that a more important competition was just beginning.

The injured athlete wasn’t hobbling off to the side of the track to quit. He was actually continuing the race on one leg to finish. One painful step at a time, each one a little slower and more agonizing than the last, but Derek continued to limp and hop and lurch and fall his way forward.

From the stands, Derek’s dad suddenly appeared on the track. Jim had jumped over the stadium railing, dodged Olympic security, and raced to his son’s aid.

With his dad’s help, Derek continued his strange, unorthodox and emotionally stirring race. As they hobbled around the track together, Derek was overcome by the emotion of the moment and his tears flowed freely. He sobbed. He leaned on his Dad, occasionally putting his head on his shoulder. But together, arm in arm, father and son, with 65,000 people shouting, clapping, and crying – made their way to the finish line.

Just steps away – with the crowd now in absolute frenzy – Derek’s father released his grip so he could finish the race on his own.

My friends, we live in a culture that celebrates the winners. We look up to the best athletes, the most attractive celebrities, the biggest personalities. We are fascinated by flash and glamour and beauty.

And yet, the very things that garner so much attention also have very short shelf lives.

You see, few people in the stadium that day remember who won the 400.  Fewer people have a clue who won that race more than two decades later.

But this story, this race, this love between a father and son, and this dedication by both to finish strong continues to be remembered.  It continues to inspire. And it continues to serve as an outstanding reminder of what a real victory looks like.

Perhaps more worthy than the ultimate position in the standings of life are the grit, determination, faithfulness and courage to finish strong. [Tweet this] | [Share on Facebook]

PS: This article would not have been possible without the friendship and guidance of my friend, Glenn Hirt, from Traverse City, MI.  Thanks Glenn for pointing me toward such a tremendous story of Real Victory!

"Our greatest happiness does not depend on the condition of life in which chance has placed us, but is always…

“Broke is a temporary condition; poor is a state of mind.” - Sir Richard Francis Burton “How do people get…