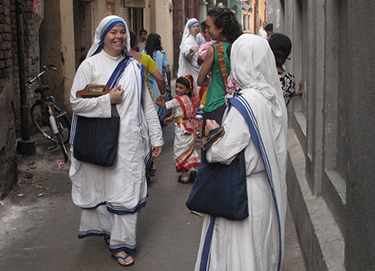 “It is from numberless diverse acts of courage and belief that human history is shaped.” – Robert Kennedy

This summer I arrived on their first day.

For the past five years, I’ve had the pleasure of speaking at the National Leadership Academy where 100’s of high school-aged kids learn what servant leadership looks like and authentic connection feels like.

I walked around the group as they were getting settled, introducing myself and asking what they wanted to do in life (big questions get big answers!).

One young woman responded, “I want to be successful and famous so that I can change the world.”

After wonderful dialogue with the student, I shared with her the story of another young woman who dreamed of changing the world. And the most unlikely way she did it.

In 1910 Anjezë Gonxhe Bojaxhiu was born in the small and unremarkable town of Skopje, part of the Ottoman Empire.

After her father died when she was eight, her family endured emotional and financial hardship. At 18, she became a nun and moved to Calcutta.There, she taught children in relative obscurity for almost two decades. Upon making her final vows she assumed the name Teresa.

Teresa saw how the poverty suffocated the community. She asked for – and was granted – permission to serve the poorest of the poor. Having nothing financially, she begged for food and money.

She’d then take what she collected to provide whatever care she could to, in her own words, “the hungry, the naked, the homeless, the crippled, the blind, the lepers, all those people who feel unwanted, unloved and uncared for.”

This was the beginning of a remarkable movement. Serving humbly in the slums, she began to draw followers who joined her in performing acts of kindness. Then a few more.

Mother Teresa brokered cease-fire agreements in war-torn lands, aided in natural disaster responses and built centers for the poor, sick and orphaned. She received countless awards for her life’s work including the Nobel Peace Prize.

The most remarkable lesson I take away from her life is this:

The crux of shifting societies, businesses and history isn’t found in stoically doing the big stuff, but in humbly and faithfully doing the little stuff. [Tweet this.] | [Share on Facebook.]

As you race through your week, embrace the truth that the biggest achievements frequently begin in the most simple of tasks, in the most surprising of places.

Yes, the road may be difficult, but in the words of one of the greatest change-agents for good from the past century, “do it anyway.”

What is one “small” act of kindness you can do in your community this week? Share in the comments below.

3 replies on “Do It Anyway”

Working with refugee families from the Congo…..teaching the children English and babysitting, while they teach me Swahili.. Very humbling . Refugee families teach me and give me so much more than I can ever give to them. They have taught me what true courage is, what love is, endurance, and how to enjoy each moment, and what hope really looks like.

Thanks for sharing and for all you do, brother Kent! Enjoy your time this evening – what a gift.

The little stuff is SO important! As I go tonight to spend time at our church, caring for and spending time with, 4 homeless families with young children (that are living there this week), this is a potent message and reminder how important what I’m doing is in the big picture!

Also, this year is the 150th anniversary of our church and the goal of the congregation is to do “150 Acts of Kindness”. We have a big board up and we are already closing in on the goal with people doing everything from helping unknown senior people across the street, to saving abused animals on remote Caribbean islands and giving them “forever homes” here in the US.

On last week's #LiveInspired Podcast, my guest Kim Scott introduced us to Radical Candor, the concept of being extraordinarily bold…

Live Inspired Vlog 189: Do It Anyway

Be Vulnerable and Open Your Heart to Others Alright, well good morning my friends! Welcome to Live Inspired with John…

A Reminder That You Are in Charge of Your Own Happiness Well good morning my friends! Welcome to Live Inspired-…