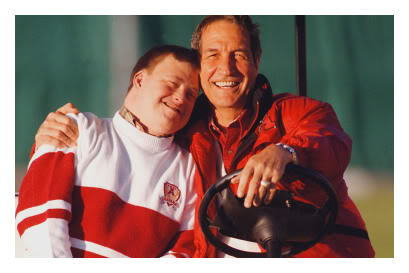 “True strength lies in submission which permits one to dedicate his life, through devotion, to something beyond himself.” Henry Miller

The first time Gene Stallings walked into my hospital room was unforgettable.

During five months recovering in the hospital after being burned, I struggled physically each day. One great escape from it, though, were visits from friends.

And as a nine-year-old kid, I absolutely lit up the day the head coach for my St. Louis Football Cardinals came to say hello.

That one visit became an ongoing friendship that continued during the months I was in the hospital. As Gene came to see me over the months, I not only shared about me, but I also learned about him.

He was born in Texas during the Great Depression, raised during World War II, and came to age as one of the ‘junction boys’ as a football player at Texas A&M under the legendary Bear Bryant.

During grueling practices, he learned about football, attention to detail, dedication to working hard, and the necessity of teamwork in achieving success. The lessons from these experiences would shape Gene Stallings into one of the greatest football coaches.

And yet, it wasn’t the football field that most influenced Gene’s success in life.

No, that came from a less likely and more powerful teacher. In his baritone, southern drawl, Gene shared with me his passion for life, love of true victory, and inspiration to be even more: his son, John Mark.

Born with Downs Syndrome, the possibility for John Mark’s future seemed dim. Yet his uncommonly bright light shined on all who encountered him, including his father.

Gene shared the many lessons on real toughness, true success and genuine love he learned from simply observing little Johnny. He shared stories of great curiosity, playfulness, and innocence that guided his son’s life. And he shared memories of challenge and heartache, as well as unmatched grace and unequaled courage that shined from Johnny’s life.

By being authentically himself and genuinely interested in others, Johnny positively changed thousands of lives.

The Equipment Room at the University of Alabama Athletic Facility is named “The John Mark Stallings Equipment Room.” He was a Paul Harris Fellow in Rotary International, an Honorary Marine by the United States Marine Corps and several universities offer scholarships in his name. He was featured in United Way commercials for the NFL, appeared on the Today Show, Dateline and an ABC Special.

When Faulkner University had an opportunity to name their new football playing field, they named it after the great Stallings. No, not legendary coach Gene Stallings, but for his son: “The John Mark Stallings Field.”

In recent years, Gene has shared that as the end of John Mark’s life approached, it became tremendously difficult for the young man to breathe. In one of their final conversations, as Johnny struggled mightily for each breath, Gene sat on his son’s bed. The seasoned coach and loving father, soaked in the moment, gently brushed his son’s hair, and asked how he was doing.

Johnny, wheezing for each breath, looked up at his dad, his favorite coach, and responded sincerely with a smile, “I fine, Pops. I just fine.”

It’s a lesson I learned from Gene Stallings. No doubt it’s one he learned from his son, John Mark. And it’s one we are each invited to exemplify through the manner in which we show up on the field of life each day.

Who do you know that dedicates their lives to something beyond themselves? Share their story in the comments below.

As a University of Alabama devotee, I can tell you we absolutely love Coach Stallings! He is as fine person as you will ever meet. And, as much as we love Coach, we REALLY loved John Mark! Seeing him walk the field beside Coach was truly heart warming. Thanks for the Blog.

Thanks for sharing your gratitude, Jeff, and for being here!