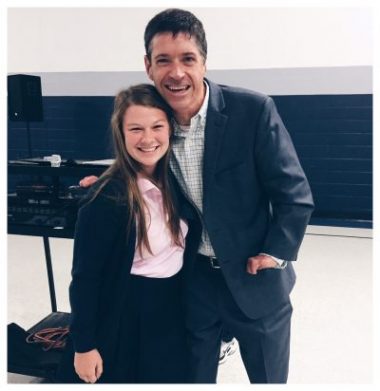 The media often focuses on the negativity and challenges within our urban communities and schools. When we listen, the future seems dismal; the light appears dim. But I had an experience earlier this month that revealed a very different picture. Let me explain.

Collegiate High School consists of 230 high school students, housed in an old brick schoolhouse, in a blighted neighborhood in St. Louis city. Yet the staff, teachers, and students refuse to become part of the problem, victims to circumstances or weighed down by challenges.

Instead, they are motivated to become the best versions of themselves by growing academically, encouraging one another and serving in the community.

The focus on others is continually on display at Collegiate. Recently when assistant principal Benicia Nanez Hunt discussed the devastating flooding in Louisiana with a few of her students, they decided to take action.

They had learned in their own community that, when you aren’t courageous and generous enough to help fix problems, you become part of those problems. So they decided to have a “penny wars” contest to see which class could collect the most to send to the flood victims.

My friends, it’s important to acknowledge that these are young men and women with very limited means. Almost 100% of the students receive free or reduced lunch and many need support to afford their school uniforms, too.

And yet, they began donating pennies in earnest that week. By the end of the day Friday, they’d collected $198 in pennies!

Benicia was impressed but challenged them as the week ended: to be mindful of all they had, considerate to those with less, and fearless in making a difference. [Tweet this] | [Share on Facebook]

Over the weekend the kids went through drawers in their houses, cleaned off dressers, went through old purses and clothes collecting an additional $456 to donate.

With just 24 hours left in the penny wars, the students went door-to-door in their neighborhood raising awareness and funds for the flood victims one door, one conversation, one penny at a time.

The following day the contest ended.

It took several staff members and carts to transport the bags, jugs, and cartons of coins into the bank for counting.

In total, $1,458.20 was donated. Donated by students who choose to view their circumstances through a lens of abundance; with a focus on all they can do to be courageous enough to make a difference.

When the “penny wars” began, Benicia Nanez Hunt said whichever class brought in the most would receive a pizza lunch. In high school, few things motivate like the promise of pizza.

To celebrate these students, and their mighty focus on others, we’ll be sponsoring a pizza party for the entire school later this week. They may not be asking for it, but these kids have absolutely earned it.

And the movement to impact continues.

The Collegiate students have now challenged four other local schools to see who can donate the most hours of service in a 30 day period.

My friends, let’s follow the example of these kids and the advice of their assistant principal: this is the time to be mindful of all you have, to be considerate to those with less, and to be fearless in making a difference.

What can you challenge yourself (or your family, your office, your classroom) to do this week to be fearless in making a difference? Share in the comments below.

Yesterday at church, a line in a hymn we sang made some reference to doing something about the evil that is all around us. I feel the Holy Spirit said to me that one of the biggest evils is hunger world-wide. I have read that if we Americans would be more generous with our means, there would be no hunger in the world. In other words, we are hoarding, at the expense of others.

I thought about making another donation to World Vision (on top of the one I just made last week)–but then I was prompted to do something else. My problem is that I am carrying more weight than is ideal. Specifically, lately I’ve been busy, and find myself stopping at a restaurant for lunch (when I could carry my lunch from home–probably a more healthy one). So….I pledged right then and there, for the next month, to NOT eat at a restaurant or fast food place–and take all the money I would have spent there and send it to World Vision at the end of the month.

I need to divest myself of my excess, AND give that where it will solve life-and-death issues. I need to see where my choices are impacting others, either for good or bad.

Thanks for all you do, John. I have spread the gospel of On Fire to several other friends, who like me, have been enormously impacted.

What a beautiful and heart warming story to start the week. Thank you John.

Kathy – thanks for being here, sharing your gratitude and for ALL you do. Stay on fire to make a “fearless difference” this week! J

You Are the Epicenter of Generosity

“Too often we underestimate the power of a touch, a smile, a kind word, a listening ear, an honest compliment,…

The Gentle Whisper of Generosity

How the Legacy of Rachel Beckwith Continues to Impact charity: water "What we do for ourselves dies with us. What…