Live Your Dreams (Not Your Fears) 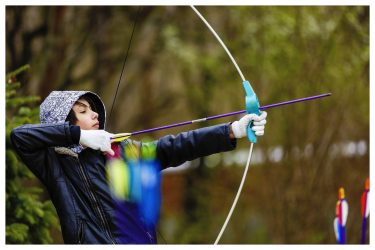 “Too many of us are not living our dreams because we are living our fears.” – Les Brown

I was at summer camp.

It was the summer before seventh grade and we were learning how to shoot a bow and arrow.

Shortly after the careful instructions were delivered, the army of bow-wielding boys took turns on a field practicing. When it was my turn, a friend in the group of boys standing behind me called my name. I turned toward the sound of his voice when one of the counselor’s barked:

“Be careful, O’Leary. It goes where you aim it!”

I was reminded of this timeless truth last week while listening to a conversation between a Clinton supporter and a Trump supporter.

Asked why their candidate was more qualified, neither answered by promoting the ideas or vision of their candidate. Instead, they highlighted past missteps of the opposing candidate.

My friends, this may work to motivate the base, get out the vote and maybe even win an election. But to transform a nation with growing wage disparity, deepening racial tensions, mounting debt and threat of terrorism, requires more than pointing out the worst in others.

To win the hearts, minds, and potential of a populace, we need voices to optimistically look up, aim high, take risks, and lead forward boldly. [Share on Facebook] | [Tweet this]

One of the very best historical examples of this truth was delivered on this very day – September 12 – 54 years ago.

It was a sweltering day in Texas. President John Kennedy stood at a podium at Rice University and shared live with 40,000 people his vision for tomorrow. He spoke eloquently about the race for space and all that it represented.

He reminded us of both the weight of the challenge and its solution:

“But if I were to say, my fellow citizens, that we shall send to the moon, 240,000 miles away from the control station in Houston, a giant rocket more than 300 feet tall, the length of this football field, made of new metal alloys, some of which have not yet been invented, capable of standing heat and stresses several times more than have ever been experienced, fitted together with a precision better than the finest watch, carrying all the equipment needed for propulsion, guidance, control, communications, food and survival, on an untried mission, to an unknown celestial body, and then return it safely to earth, re-entering the atmosphere at speeds of over 25,000 miles per hour, causing heat about half that of the temperature of the sun–almost as hot as it is here today–and do all this, and do it right, and do it first before this decade is out–then we must be bold.”

It was a massive vision, daunting task, and impossible dream. Until July 20, 1969, when Neil Armstrong radioed an unforgettable message of success, “That’s one small step for man. One giant leap for mankind.”

During the midst of the cold war, with business markets sluggish, and our nation struggling with issues of race and more: a bold vision of possibility was set and – was met.

The challenges we face today are as significant as those facing Kennedy, the 40,000 in attendance and those listening around the world. The creativity, solidarity, genius, and investment that allowed his vision to become a reality was not ignited from a place of weakness and fear, but from a mindset of possibility and conviction.

“Be careful. It goes where you aim.”

My friends, those words turned my attention back to the target before me as a kid. They are important for political and business leaders today. And they have the power to rekindle within each of us the spark to stop living out of fear and to begin dreaming, leading, and living a bit more boldly.

Think of a time when you refocused your aim on your true target – removing distractions. What was that experience (and outcome) like? Share in the comments below.

1 reply on “Live Your Dreams (Not Your Fears)”

I heard you speak at my school in Minnetonka MN and you really touched my heart, and I was wondering if I could contact you about an event we have coming up in MN in November I would love for you to possibly speak at. The organization is called Fire Fighters for Healing. They help raise money for children’s burn units and have a camp for the kids to go to. I have attached some details about the fundraiser coming up. My phone number where I can be reached is (952) 200-0738. I hope to hear from you.

We are hosting our 2nd Annual Red Tie Gala taking place November 12th at the Muse Event Center downtown Minneapolis. We are expecting over 400 guests, and will feature live music and entertainment, special celebrity guests along with silent and live auctions.

Firefighters For Healing is a 501C3 nonprofit charitable foundation. Our founder is a local fireman who was severely burned while battling a home fire in Minneapolis. We provide education, fire prevention awareness and direct assistance and support to children who are burn survivors. We also support local burn care units including, HCMC and Regions Hospital. Please take a look at our latest 3 minute video as to How We Make A Difference in the lives of burn survivors. https://ssl.gstatic.com/ui/v1/icons/mail/images/cleardot.gif

Funds raised at this event will go directly to support local burn survivors and to help children attend burn camps. To insure a successful event we need the support of both businesses and the community. This is where you come in.

Each week on Parade.com, John answers one question on how to live an inspired life. This week, he addresses a…

Ask John: 10 Travel Hacks to Live Inspired on the Road