Do You Feel Lucky? My conversation with Joe Buck 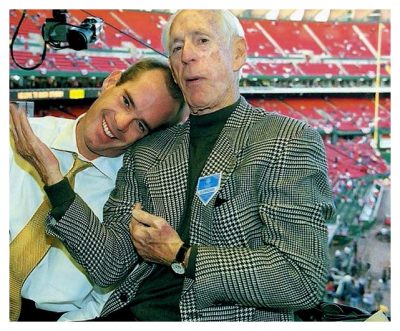 “I’m a greater believer in luck, and I find the harder I work the more I have of it.” – Thomas Jefferson

As the son of legendary Hall of Fame announcer Jack Buck, he was born into baseball and broadcasting royalty. Because of that he was given the opportunity to drop out of college, sit next to his dad and broadcast St. Louis Cardinal Baseball games.

Although naturally gifted as an announcer, the 21-year-old Buck was not welcomed into the booth and onto the airwaves by all. There were whispers of nepotism and editorials that a door was opened unfairly for the undeserving man.

One article was so disparaging that Joe wept after reading it.

He cut it out and kept part of the article at his desk. It read: “Why is a kid, still in college, showing up on what people consider the premier local team network in baseball? The reason is simple and it’s spelled B-U-C-K.”

Joe used it as motivation to work tirelessly to become worthy of what others thought he didn’t deserve.

Decades later Joe is now the lead broadcaster for both the National Football League and Major League Baseball. He’s called 19 World Series, numerous Super Bowls and received several Emmy Awards for his work. No one questions whether he is worthy anymore.

Well, almost no one.

On occasion, the voices that whisper he isn’t worthy still creep in. Although Joe wishes he wouldn’t be weighed down by negative tweets, media or public opinions, the reality is he does get weighed down. Joe may be confident, but he’s also human.

Which is why a birthday present from his daughter, Trudy, was so meaningful.

She was in his home office and came across a yellowed and deeply frayed article about her dad. She knew that her parents’ divorce was painful for everyone, that her dad had been struggling for several months with vocal cord issues and that the ache of losing her grandfather remained a heavy burden for him, too.

To encourage him she painted words onto a canvas she knew were uplifting, true and would remind him of the legacy she was proud of. On Joe’s 44th birthday he opened Trudy’s gift and read the painted words:

“Why is a kid, still in college, showing up on what people consider the premier local team network in baseball? The reason is simple. And its spelled B-U-C-K.”

The very same words that 23 years earlier made Joe weep out of sadness, became words that filled him with tears of joy and pride.

The words intended to cut and denigrate, painted through the lens of a child, became words that healed and elevated.

The words that suggested he was unqualified and unworthy, became a beautiful reminder that he was in fact worthy. And more than that, he always had been.

(I had the chance to sit with Joe as his first interview before the launch of his book, Lucky Bastard. It’s an awesome discussion about his life, mistakes made, lessons learned, his dad, and things he can’t say on television. Check it out here.)

Joe Buck is lucky. But the reminder today is that so are we.

Yes, last week’s election results remind us of the divisiveness in our country and world. The posts online and protests in the streets reinforce that divide and leave many feeling disenfranchised, anxious and mad.

My friends, today, I challenge you to remember you get to choose the perspective with which you view the results behind us, the world around us, the words said about us, the challenges before us, and the opportunities in front of us. The perspective you choose will, as always, determine what happens next.

The perspective with which we view life informs the manner in which we view our lives today and more importantly: our ability to paint something even more beautiful through our lives tomorrow. [Tweet this] | [Share on Facebook]

As a nine-year-old, Joe’s dad, Jack Buck, entered my life. Although I was dying, he encouraged me to fight. Although it was highly unlikely I’d ever get out of the hospital, Jack painted a picture of “John O’Leary day at the ballpark.” Although I could not write, he sent me a signed baseball with a note that if I wanted another ball, I’d have to write a thank-you note. During the summer of 1987 I wrote 60 thank you notes; received 60-signed baseballs; and did indeed learn to write again.

In honor of my hero Jack Buck, and the time spent with his son, my friend, Joe Buck on my most recent podcast, I am giving away 60 copies of Joe’s new book. Check out the episode notes for Live Inspired Podcast with John O’Leary Episode 003 to enter the contest.