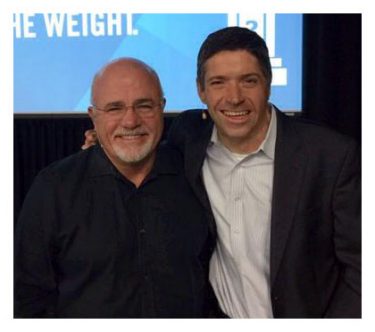 “Broke is a temporary condition; poor is a state of mind.” – Sir Richard Francis Burton

“How do people get rich, Dad?”

My seven-year-old, Henry, asked this question recently. We were on the way to school with his two older brothers, so I asked for their help answering.

My nine-year-old shared the best way to get rich is to play professional sports, become famous or win the lottery. His eleven-year-old brother offered that you can get a job that pays a lot or you can inherit money from someone.

While both boys were right, instead of encouraging them to begin playing the lottery and reading obits, I told them the story of one of the wealthiest individuals I’ve ever met.

The story begins in Antioch, TN when a 12-year-old named Dave Ramsey asked his dad for a little money to buy a sweet treat. His dad replied, “You don’t need money. You need a job!”

His father agreed to let him use the lawn mower and thus began his lawn mowing business. The 12-year-old made business cards and went door-to-door offering his services. The business grew and by the age of 26, Dave Ramsey had started other successful businesses and amassed more than $4 million dollars in assets.

Not bad for a kid who just wanted a little money for a snack!

Significant changes in lending regulations were made just two years later. Dave Ramsey found himself stretched too thinly and he went from being on top of the world to buried by it.

His financial fortune was lost. He found himself completely broke with a young family to support.

And yet, broke is a temporary condition; poor is a state of mind.

Dave learned lessons during his 16-year ascent to financial wealth. More interesting, though, is that he learned even more significant lessons on his descent from it. He combined these lessons with biblically based teachings around money and began sharing with friends.

He saw how many people were struggling with financial stress, so he taught his lessons at a local church. The demand grew. So he taught more classes, ventured into radio and distilled his lessons into a book to reach even more people.

The book was called Financial Peace. It didn’t sell that many copies. At first.

Today, Dave has sold more than 5 million books, his radio show is carried by more than 500 stations, he has 12 million weekly listeners and more than 600 team members helping others live like no one else.

Dave Ramsey is rich. But it’s not Dave’s elegant house overlooking Nashville, his prosperous business enterprises or his net worth that makes him rich.

He has a passion for what he does that drives him, a beautiful wife, Sharon, that loves him, an expanding family that grounds him, and a strong faith that guides him. He’s funny, bright, honest and generous. (Dave has become a dear friend and I was fortunate to sit with him on my recent Live Inspired Podcast episode. We discussed his business, finances, worst mistakes and best decisions. It’s a fascinating interview. Check it out here.)

Today, Dave is a 56-year-old husband, father, grandfather, and sagacious man who remains grateful for yesterday’s mistakes, today’s gifts and the hope to do even better tomorrow.

My friend, you can play the lottery, strive to make it big in some sport and wait for the wealthy family members to pass on their good fortune.

But my challenge to you today is this: Realize that real wealth is not found in what we obtain financially. It’s the person we become along the journey and the ability we have to faithfully impact others along the way. [Tweet this] | [Share on Facebook]

What a wonderful article!

"Our greatest happiness does not depend on the condition of life in which chance has placed us, but is always…

"Our greatest glory is not in never falling, but in rising every time we fall." - Confucius With the Summer…