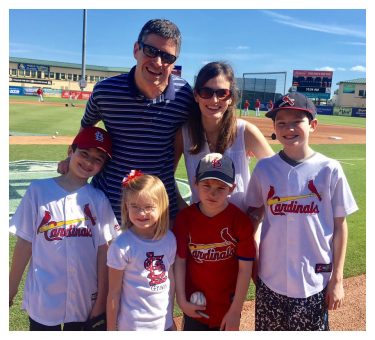 “Everything has a way of coming full circle. It takes patience and perseverance to see a dream through, to close that circle. Because some dreams, like some circles, can be much bigger than others.” – K.D. Trask

I’ve always been confident that the answer to both questions is an emphatic, “Yes!”

And a recent experience reminded of the circle of life, the power of perseverance, and the possibility still present in all of our lives. Let me explain.

The day after I was burned, Jack Buck, the voice of the St. Louis Cardinals and my childhood hero, walked into my hospital room. Although we’d never met in person, and I was unable to open my eyes to see him, I recognized his raspy, resonant voice immediately. During the conversation, he encouraged me to fight on. And he committed that when I got out of the hospital, we would celebrate the victory of going home with John O’Leary Day at the Ballpark.

As he left my room, Jack was told by the nursing staff that I was going to die; there was no reason for hope. Despite this, he returned the following day.

The visits continued over the next several months. And each time, he would end the conversation with the words, “Kid, keep fighting. John O’Leary Day at the Ballpark will make it all worthwhile.”

After five months in the hospital and some additional months at home recovering, Jack kept the promise of John O’Leary Day at the Ballpark. He picked me up and we went to the stadium. We watched batting practice from the field and visited with the coaches in the dugout. Jack then rolled a wide-eyed, awe-struck little boy through the door that read, “PLAYERS ONLY CLUBHOUSE.”

As the players prepared for the game, each in various stages of undress, a stunned, but the joy-filled little boy got to meet his heroes, get their autographs, and be welcomed into their family.

It was a day I will never forget.

And as significant as that celebration was 30 years ago, it’s what happened earlier this month that completed the circle.

Two weeks ago, the Assistant General Manager for the St. Louis Cardinals, Mike Girsch, toured me through the spring training facility for his team. We walked around the stadium, watched the Cardinals take batting practice, and visited with the coaches in the dugout. We then made our way into the clubhouse.

Almost 30 years ago, Jack Buck had pushed me into the clubhouse with butterflies in my stomach so severe they almost lifted me out of that wheelchair. Yet it was here that an overwhelmed, anxious little boy was greeted and felt accepted by his heroes.

Three decades later, the anxiety and butterflies remained, but this time I walked upright into this room.

General Manager John Mozeliak commenced the meeting, speaking to his team about the challenges of a season, the certainty of adversity, and the need to be mentally tough enough to embrace it, to rise above it, and to be better because of it. He shared that no one embodies this more than our speaker today – and then he asked his team to welcome his friend, John O’Leary.

We spent 45 minutes in the clubhouse together. These successful, supremely talented men leaned forward in their chairs. They laughed, they cried, they asked questions. They then committed to doing even more both on and off the field.

If I am really honest about it, just moments before speaking I had wondered if they’d embrace my message and accept me into their family. Just like 30 years earlier, they did.

My friends, life brings us full circle and back to a place where we’ve been before to remind us both of how much we’ve grown and also how much we can still do. [Tweet this] | [Share on Facebook]

Yes, it takes patience and perseverance to see a dream through, to close that circle. Because some dreams, like some circles, can be much bigger than others.

The goal of our lives, then, should not be too close the circles or be hyper-focused on the fruit of our labor, but to dream such beautiful, bold, transformative dreams that when the circles close, we can look back on our dreams, back at our lives, and be overwhelmed with gratitude.

Reminiscing about experiences, parties, and events in life is a crucial way to not only connect with our past, but to reimagine our future. On my most recent Live Inspired podcast, I recall the highlights from a second season of interviews, a community of listeners that has swelled to more than 200,000 and a circle that just keeps getting bigger and bigger. Thank you, my friends, for being part of that circle. Listen to the episode to be reminded not only where we’ve been, but where we are going next.

That is amazing John! Talk about coming full circle… They gave to you and you give back in spades! I just recently moved to O’fallon Illinois near the St. Louis area and I will be going to my first Cardinals game On April 4. I hope since I live in the area I will get an opportunity to hear you speak some day. In the meantime I will enjoy your inspirational emails and talks. Thank you so much for all the insight and inspiration you bring to others.

What a great story!

When I read about you giving them your autograph, I just burst into tears! Talk about full circle! The story of how those autographs given to you helped give you the motivation you needed at that time in your life was so powerful and now your autograph to others is giving them the motivation they need. Wow!! If we allow it, God can turn our bitterness into blessing – you are a shining example of this!