Skip to content
Home | Blog | The Only Response You Ever Need
Monday Motivation | March 13, 2017

The Only Response You Ever Need 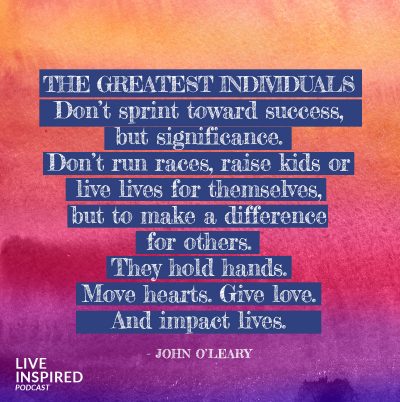 “Say YES. And you’ll figure it out afterward.” – Tina Fey

The following is an excerpt from my #1 National Bestselling book On Fire.

I was reminded of this story during a recent interview with Travis Thomas, author, coach and improvisation expert for my Live Inspired Podcast. Check out our powerful conversation about how to get “unstuck” by living “yes.”

It describes his burns as a boy and stunning recovery afterward. It describes his rise through the ranks of running, beginning in high school, then college, the Olympics, culminating in Glenn being regarded as the number one runner in the world. It lists races, locations, times and finishes. It mentions he retired in 1940.

And it mentions nothing about the 48 years between his retirement and his death. 48 years that I’m convinced are the most magnificent and impressive aspect of his life – and perhaps any life. Let me explain.

Glenn moved back to Kansas after the 1936 Olympics, married, and started a family. He and his wife had three children when they learned about a Russian family who had been displaced during World War II. Glenn and Ruth discussed this family, their needs, and eventually invited this struggling family to live in their tenant house for a few years.

After retiring from running, Glenn began speaking to groups around the country. He was so inspiring, faithful, and clearly a man of high character that letters began arriving at his ranch from audience members. They’d thank him for his time, his story, his accomplishments, and his encouragement. One note even told the story of a struggling child, the challenges he faced, and ended with the parent of the troubled young boy asking, Could Tommy come stay at your ranch for a bit?

Glenn and Ruth already had three kids. They were busy on the ranch and life was hectic on the road. And, more than that, they already had a good life. Why mess with a good thing?

But there was also a slight tug of discontent; a belief they could do more. With some creativity and frugalness, they decided they could financially support another child. What would it hurt to have one more kid to fill those rooms, join the family, make a difference?

So they said, Yes.

Glenn and Ruth proved to be outstanding parents and guardians. Soon other families were writing asking if their kid could visit the ranch. The Cunningham’s answer was always the same: Yes.

Glenn and Ruth made no distinction between those they brought in from the outside and those born of their own flesh and blood.

They were all considered their children and received unconditional love. In return, these kids were expected to follow rules, do chores, help take care of the animals. In other words, they were part of the family.

Ruth and Glenn opened wide their hearts and their home. Over more than four decades of serving, raising, fostering, encouraging and loving these children, they had welcomed more than 9,000 children into their family.

It wasn’t easy financially. It was tireless work for both of them. But they made room for those children, knowing whatever love and respect they could provide these children would make a difference.

Glenn Cunningham lived from a place of great love, with a simple response to questions, challenges, and opportunities before him: Yes.

It guided him from a hospital bed with severe burns on his legs to a podium with medals around his neck. It motivated him from a comfortable house with three kids to a change agent for good impacting thousands of youth. And it elevated him from a life of success and status to one of significance and impact.

The greatest individuals who attain the highest forms of achievement in life don’t sprint toward success, but significance. They don’t run races, build businesses, raise kids, and live lives for themselves; they do these things to make a difference for others. They hold hands, move hearts, give love, and impact lives. [Tweet this] | [Share on Facebook]

They say Yes. And they figure it out afterward.

My friends, this is your moment. Say Yes.

1 reply on “The Only Response You Ever Need”

I love it…thank you for inspiring my morning..

“Anger, resentment and jealousy doesn't change the heart of others - it only changes yours.” - Shannon Alder “Dad, what’s…

Every Tuesday on Parade.com, John answers one question on how to live an inspired life. This week’s question comes from…

Four Steps to Have Your Best Thanksgiving Ever

“For to be free is not merely to cast off one’s chains, but to live in a way that respects…