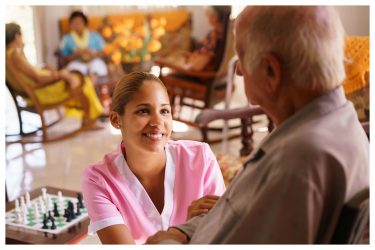 Last week I flew to New York and arrived just after 1 am.

When I approached baggage claim, there was a gentleman holding a piece of paper with my name on it. His name was Armand. We made our way to his car, out of the airport, and onto the highway, chatting the entire way.

As we pulled in front of my hotel, he finished sharing a valuable lesson that I needed to hear and perhaps you need to hear, too.

Armand shared his journey of living in Albania, experiencing extreme hardships including being displaced due to war, enduring tragedies and leaving family. Eventually, he came to the US with no ability to speak the language, no money and no idea what to do next.

He worked hard, learned a new language, found love, married and had two children. He shared that perhaps it’s not been an easy one, but it’s most certainly been a good life.

We discussed his current job and past experiences ranging from a couple years in law school to spending almost a decade as a truck driver. In his 18-wheeler, he crisscrossed the nation. Through hundreds of interactions with dock workers, gas station attendants, freight managers, truck drivers, diner waitresses and fellow sojourners, he saw every corner of the country – and every spectrum of individuals within it.

I asked how all those experiences shaped the way he sees the world today?

He thought for a moment, looked into the rear-view mirror at me, and responded: “The people here are better than they know.”

I thought about Armand and his statement while sitting 12 hours later in the same airport he’d picked me up from.

I was in the waiting area for my flight. The TVs were airing the news: The most recent terror attack in the UK, the US pulling out of the Paris Climate Agreement and the retirement center nurse who murdered almost a dozen patients.

I was feeling absolutely beat down by the news, misery of life and certain doom we all face… and then I heard the whisper of hope.

It came not from the news but a new friend: Armand’s voice from the day before, “People are better than they know.”

While it is true that terrorists murdered, injured and attempted to sow fear, it’s also true that a transport officer with a simple baton, a Romanian baker with a basket and other unsung heroes raced toward the terrorists to halt the attacks. These heroes responded to an act of unconscionable cowardice with undaunted courage.

While it is true that the US pulled out of the Paris Climate Agreement, it’s also true that the global movement to reduce greenhouse gasses continues and that executives from some of the most influential companies and mayors from cities around our country are committed to championing the cause.

While it is true that one nurse took the lives of her innocent patients, it’s also true that hundreds of thousands of nurses, doctors, medical technicians and janitors passionately work each day to serve the sick and weak. What drives them isn’t fanfare or a spotlight, but instead a purpose to provide healing, kindness, and love into the lives of their patients.

My friends, it turns out that everything has beauty, but not everyone chooses to see it. It also turns out that our friend Armand is right: The people here are better than they know.

Turn off the news and see for yourself.

2 replies on “See For Yourself”

I needed to hear this today, thank you & thank Arman for reminding us of the goodness of people. There is so much uncertainty in our world & I fear the future my Grandchildren are having to live in. I do believe most people are good of heart, we just don’t hear enough about them with so much negative news featured daily.

“As long as we continue to live as if we are what we do, what we have, and what other…

Ask John: Serving Others without Depleting Yourself

Every Tuesday on Parade.com, John answers one question on how to live an inspired life. This week, Robin asks John…