A Small Act of Caring with Chris Norton 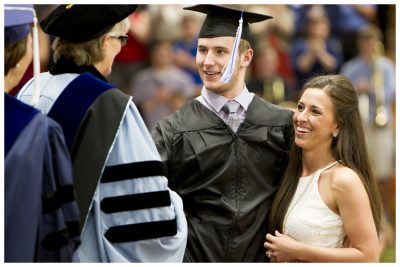 “Too often we underestimate the power of a touch, smile, kind word, listening ear, honest compliment, or the smallest act of caring, all of which have the potential to turn a life around.” – Leo Buscaglia

Standing up after being knocked down is difficult.

Regardless of what triggered the fall, the journey back up requires a strong will, daring vision, and resolute character. It’s an action that demands the best of our efforts and often, it’s one that can’t be made by ourselves. Let me explain.

Chris Norton knows what it’s like to be knocked down, lose it all and then battle back and rebuild.

As a college freshman, he was injured making a tackle during a football game. As a packed stadium fell silent, Chris found himself lying on the field surrounded by coaches and trainers. He was completely conscious but unable to move. After an emergency helicopter flight to the hospital and various tests, it was explained that he had broken his neck and the likelihood of his regaining any function was less than 3%.

Chris heard the prognosis but decided to not be defined by it. He committed on that first day to not only regain function but to walk across the stage to accept his college diploma.

Weeks later, the reality of the injury set in. With very little progress made, Chris became less optimistic. Then, in the middle of the night, the door to his hospital room opened and Dr. Georgia entered. She was there to do a routine check of his vital signs but realized quickly that the larger concern might be his emotional health.

She got down on one knee, looked him in the eyes and said, “You are going to beat this.” Unconvinced that Chris believed her, she spoke more firmly, “Chris, look in my eyes.” The young man turned his head and made eye contact. She said, “I am from Wyoming. People from Wyoming don’t lie. You. Will. Beat. This.”

The doctor rose to her feet, smiled at Chris and left. Chris’s dream was reignited – all it took was an acknowledgment from another person; this small act of caring.

For the next few years, Chris fought on; owning the truth that he would “beat this.” Day after day he tried, endured, fell and rose again. He prayed, dreamed and believed that he could make the walk.

On May 25, 2015, garbed in a cap and a gown in Luther College’s packed auditorium, with his parents and classmates looking on, Chris rolled toward the platform in his wheelchair.

Assisted by his fiancé, he rose to his feet, walked slowly across the platform and accepted his diploma. A loud roar from the thousands gathered filled the auditorium. (I was so moved by Chris’s story and the video sharing his big walk that I had him on the Live Inspired podcast. Listen for the encouragement to rise above your own adversities here.)

Chris is a fighter, overcomer and hero, but he could not have done it without others. He needed his family, his medical team, his teammates and his fiancé, Emily. He needed their encouragement and he needed their efforts.

He needed a chance visit from Dr. Georgia. He needed the bold vision for tomorrow that was crystallized after their compassionate conversation.

And he needed hope for his journey to come.

My friends, too frequently we underestimate the power of a touch, smile or kind word. We undervalue the profound gift of a listening ear, honest compliment or small act of caring.

In the end, it’s often these small acts which have the potential to turn a life around. Maybe even your own. [Tweet this] | [Share on Facebook]

"Some people care too much. I think it's called love." - Winnie The Pooh Today, in my Wednesday inspiration vlog,…

"Take a breath and focus on what is important right now. Don't get too far ahead and miss what you need…