Skip to content
Home | Blog | Bring It Into the Light
Monday Motivation | September 11, 2017

Bring It Into the Light 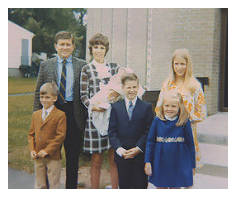 He and his four siblings were raised in an idyllic community filled with children their age just outside of New York City. During the summer, they played outside all day; only coming in when it was time for dinner.

Despite childhoods filled with life, laughter and the stuff of movies depicting “the good old days,” the Gillan family – like all families – struggled quietly with depression, too.

While Dennis was away at his first year in college, he received a call that his older brother, Mark, had been in an accident. Mark, who had taught him how to ride a bike, throw a ball and climb a tree, had died.

Upon arriving home, Dennis learned the even more painful truth. His brother’s car wasn’t hit by another car and didn’t strike another object. In fact, his car never left the garage. It wasn’t an accident; it was suicide.

Struggling to Process Loss after Suicide

Unsure how to process their loss, the family kept the agony and emotions bottled up. They rarely spoke of Mark’s death, the struggles he’d quietly shouldered or the insurmountable pain of losing him.

Nine years later Dennis received another call that changed his world. His younger brother, Matthew, the kid that he taught to ride a bike, throw a ball and climb a tree, had also died.

Dennis was overwhelmed with grief. He remembers being in a thick fog at the funeral, completely unmoored and disengaged during the following week with his family; furious about all he’d lost and even scared for his own life.

After Matthew’s funeral, he remembers the long drive with his wife back to their home. He dreaded going back to work and the idea of pretending that everything was fine.

And, he vividly remembers dreading that, after being gone for more than a week, he’d be returning not only to a life that would never again be the same, but to a yard certain to be in need of maintenance.

It may seem insignificant, but with the dense fog of sadness that already enveloped him, the idea of having to cut the grass after the long drive almost broke him.

As he and his wife pulled onto their street, they noticed immediately.

The grass had been cut, weeds pulled, driveway swept and fresh flowers on the front door, but there was no note. The neighborhood had quietly come together to lift up this young family. Knowing they couldn’t change the past, they were there to support going forward.

The simple act of love overwhelmed Dennis. He parked the car, put his head down and wept.

Finding Support, Resources, and Community after the Death of a Loved One

Dennis began to realize he didn’t have to do this alone.

He sought a counselor and joined a support group. He began processing the losses, stopped self-medicating through drinking and got comfortable asking for help when he needed it. Dennis committed to making sure his brother’s lives weren’t forgotten and their deaths weren’t in vain.

Today Dennis speaks all over the country, using his losses to fuel conversations and encourage others to share their struggles and be open about mental health and suicide.

(Dennis was my most recent guest on the Live Inspired podcast. In an emotional, vulnerable and beautiful conversation he shared his life story – and how we can better live ours. Don’t miss it. Check it out here.)

Of the thousands of people experiencing mental health issues each year, did you know that only 20% seek treatment?

My friend, don’t hide. Seek help and lean into others. When fire ignites, cancer attacks or tragedy strikes, we lean into our community for support, prayers, and love. We must do the same for depression, bipolar disorder, and mental illness. We can’t shoulder the weight alone.

My family, the families of my co-workers and the families of innumerable friends have been directly impacted by depression and suicide. With this being Suicide Prevention Week 2017, let’s bring into the light what has been too long castigated into the darkness.

Check out these tips from National Alliance on Mental Illness to Take Charge of your Mental Health and Support a Loved One’s Mental Health.

Sharing isn’t a sign of weakness but strength. And sharing doubles our joys while halving our sorrows.

This is your day. Double your joys and: Live Inspired.

The Light of Gratitude

"We must stop setting our sites by the light of each passing ship. Instead, we must set it by the…

Live Inspired Vlog 190: Bring It Into the Light

John O’Leary shares an important message on suicide awareness and prevention with Dennis Gillan on the Live Inspired Podcast. Every…