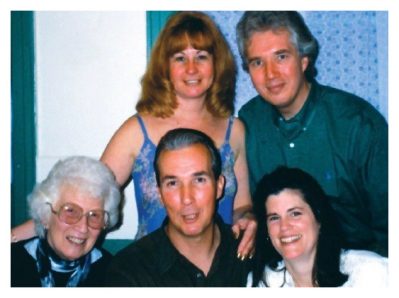 “Love has no age, no limit and no death.” -John Galsworthy

While speaking to a group of financial advisors in New Jersey earlier this month, I asked them to reflect on one individual who inspired them to do, be, achieve and love more fully in their lives.

After a momentary pause, a hand went up from three rows deep. A gentleman stood, grasped the microphone, cleared his throat, and shared a story I’ll never forget. I wanted to share it with you today.

Craig Jantz took the microphone, gathered his thoughts, looked around the room and said, “My mother. Her name was Winifred; her friends affectionately called her Winnie. She was devoted to her family, active in her faith, never uttered a bad word, was joy-filled and simply passionate about life.”

There was an audible gasp in the room. With the skyline of New York just to the east, the monumental significance of that date wasn’t lost on me – or anyone else in the room.

When Craig arose early on September 11th for work, he noticed he’d missed a call during the night and had a voicemail. He heard the hushed voice of his brother stating that their mother had just passed away. The brain cancer their mother had battled so courageously for months had ultimately claimed her life.

Craig was crushed. This is the woman who had raised him, loved him, encouraged him, and guided him through in numerous ups and downs in life. This was his hero, his role model, his friend.

This was his mom.

Although the day was packed with work meetings and responsibilities, he called his partners Dave Ferrugio and Kenneth VanAuken early on September 11th. He explained what had happened, told them he wouldn’t be in that day and asked them to call if they needed anything. They responded that they were good, could handle whatever happened, and for him to take care of his family.

It would be the last communication he ever had with either of them – or with anyone else he worked with at the firm.

You see, Craig worked at Cantor Fitzgerald, a firm located on the 101st – 105th floors of the North Tower. On the fateful day of his family’s personal crisis, the entire world was about to be permanently and tragically altered by terrorism. Four airplanes hijacked; thousands of innocent lives lost. Including the 658 employees of Cantor Fitzgerald.

Hours after learning of his mother’s death, Craig grieved the loss of his entire team, an attack on the city he loved, and an assault against the very tenets of freedom he cherished.

And he wasn’t alone.

As their mother grew weaker in September 2001, Stephen realized that her days were numbered. He wanted to support her as best he could. He wanted her last days to be at her home, surrounded by her family. He took a leave of absence from his New York ladder company to be with his mom. He brought her into his home and his family took care of her until the end of her life: September 11, 2001. It’s why he, too, wasn’t working that morning.

Before handing the microphone back to me, Craig looked around the stunned room and shared, “My mother gave my brother and me life. Twice. And in small ways I think that’s the calling on all of our lives. In spite of all the bad stuff around we’ve been through, to encourage others to fight on and to live forward.”

(Our most recent Live Inspired podcast episode reminds us that the end of one chapter of life can open up unexpected opportunities in the next chapter. Join me and my guest, Mike Robbins, as we discuss his journey, lessons learned and pivoting forward into new possibilities. Check it out here.)

My friends, we all know that it’s easy to get beat down by everything from trivial challenges to the massive tragedies. We can spend our days focused on all the struggles we face, the tragedies we’ve endured, and the seeming impossibility of the journey going forward.

Or we can choose to be like Craig, Stephen and their beautiful mother, Winifred, and live forward.

We can choose to be grateful for all we have.

We can smile broadly and strive boldly until the end.

We can attract others to us not so much with the physical gifts we give them, but with how we elevate them when they’re with us.

We can number our days by being mindful of the absolute miracle and the delicate finiteness of life.

No, we won’t be able to alter all the tragedies, acts of terrorism and sadness of the world. But in our corner of it, we can inspire others to fight on, live forward, and confidently believe that the best is yet to come.

Totally relatable story and a gentle reminder for me how special my own mother is to me and the footprint she left in this world.

So inspiring. Having lost my Mom in January, totally understand….Thank you for sharing

Awesome story and very inspirational. Thanks for sharing.

John, thank you for sharing the Jantz’s amazing story. I realize that each of us has a unique journey but sharing our experiences can help us aspire to be the person God intended us to be.

The Gift of Turbulence