Welcome the Promise of New Life 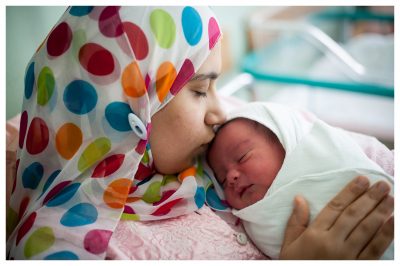 Asel Tamga Ignites a Movement of Unity and Love

Being the first is a big deal.

We celebrate the first student to answer the question, the first athlete to cross the finish line, the first visionary to prove the impossible, possible.

In most of our communities, we even celebrate the first to be born in our cities at the start of a new year.

What better personifies the promise of a new year, the potential within it, the reason for hope, optimism and rejoicing than the birth of a child?

With 2018 just 47 minutes old, a little one was welcomed into the world at a hospital in Vienna. After calling other hospitals in the region it was clear that baby Asel was indeed the first.

The delight of the young parents on the birth of their first child was shared by the entire hospital staff and then with the entire community. Several posts were also shared on social media celebrating “Vienna’s New Year’s Baby” with the region.

However, what was intended as a cause for celebration quickly spiraled in a most unforeseen direction.

You see, Vienna’s firstborn of 2018 was born to Naime and Alper Tamga. In the picture shared online, the proud father embraced his exhausted young wife, as she cuddled her newborn with a beautiful smile. And because of her religious tradition, she also wore a bright pink headscarf.

Rather than the traditional comments welcoming this new baby, social media ignited in a flurry of hate speech and bigotry. Dozens of comments criticizing the family, disparaging their religion, demanding they return to their homeland, and much worse were posted online.

Baby Asel became the unfortunate poster child for the fear-based, narrow-minded, anger that still exists in Austria – and in all regions of the world.

Comments welcoming this child and this family began trickling in, then flowing, and eventually deluging the negativity. The notes poured in not just from the city, but from the entire country and around the world. Tens of thousands posted, wrote notes and sent gifts congratulating the family and letting them know that they were welcomed.

This child inspired the voice of the love-based, open-hearted, joy that exists in all parts of Austria – and all regions of the world – to be heard. This voice is fueled with a sense for gratitude for all they have, strives to make things even better, and enjoys a sincere optimism that the best is yet to come. It’s an attitude that awakens unity, new possibility, and life-giving solutions.

My friends, with so much negativity in our communities and world, let us collectively seek the promise of a better tomorrow. Let us desire, and then make real, a better community and world.

Do you have a story of good conquering evil, love overcoming hate, light washing away the darkness? I’d love to hear about it in the comments below!

3 replies on “Welcome the Promise of New Life”

I have to disagree with Bonnie and her post about fearing John will alienate many because “…you have chosen to make politics a part of your beautiful program.” I fail to see how posting on this topic is political. It’s about good conquering evil, love overcoming hate, and light washing away the darkness, over support for the parents of the first child born of 2018. Yes, the reason people were sending hate is in part political but it’s more about racism than anything and that is not just a political issue. It’s an issue that we all deal with regardless of political beliefs. It’s a human issue, not a political issue, in my mind, and I am very happy that John chose to bring it into the light.

Thank you for enlightening us on this story. It is indeed proof that good can overcome evil. What really concerns me are the ever present negative forces that still haven’t been silenced by education, care and love. Racial hatred is one thing we should be able to eradicate, we are not born racist!

I am so disappointed that you have chosen to make politics a part of your beautiful program. I have been so inspired by you and your incredible courage as well as the amazing people that you have interviewed and brought to the forefront. I know your intentions are the most honorable but you will alienate so many, not because of your stand, but because you have put a political hot button issue into your program. Thank you for letting me express my feelings and I look forward to many more inspiring messages.