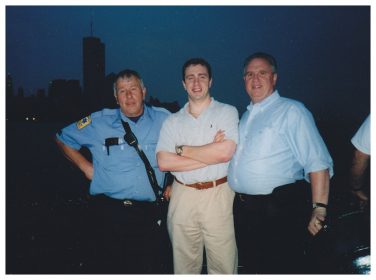 How the Life of Welles Crowther Continues to Inspire

It happened over a simple work lunch.

Business owner and attorney Matt Weiss met with his business banker, Jeff Crowther. The two men discussed strategic direction, current challenges, and potential areas of risk. They typically enjoyed a healthy working relationship, but there seemed to be a disconnect during this visit. Jeff seemed less focused, less engaged, as if his thoughts were elsewhere.

After some prodding by Matt, Jeff revealed that his mind wasn’t fully there because he was thinking about his family, his son, and the approaching 10th anniversary of his son’s death.

Jeff shared that his son’s name was Welles, he was a 24-year-old equities trader at World Trade Center and he perished during the terror attacks on September 11, 2001. As Jeff continued, Matt closed his journal, forgot about business for a minute, and leaned forward in stunned disbelief.

What began as a meeting discussing liquidity, financing, and interest rates shifted dramatically into one that talked about family, love, loss, and grief.

Jeff shared the intimate details of where he was when the first reports came in, what his immediate prayer was, the moment his hope turned to despair, and how his family chooses to remember their son today.

As he continued, though, he added details not only in regards to all that had been robbed from them that day, but revelations about his son’s remarkable heroism and the stunning story of numerous lives that were directly, dramatically and permanently altered because of his son’s sacrifice.

In awe of Jeff’s love and his son’s courage, attorney Matt Weiss was not only moved to tears, but moved to literally transform his career.

The successful attorney pivoted away from his practice of law, striving instead to share this story with as many people as he could. With no experience in film, he researched, personally funded, and then directed a full-length documentary detailing the life, death and legacy of Welles Crowther.

Narrated by Gwyneth Paltrow, “Man In Red Bandana” recounts the previously untold, unforgettable story of Welles Crowther, a young man who initially survived the attacks on 9/11, yet ultimately died a hero while singlehandedly leading more than a dozen others to safety.

(I recently had the great pleasure of visiting with attorney-turned-film-maker, Matt Weiss. To hear the heroic story that the Crowther family shared with Matt and why it impacted his life so dramatically, please listen to our Live Inspired podcast. The life, the death, and the profound impact of young Welles Crowther is a story that needs to be heard, appreciated and imitated. Listen here.)

Taking Time to Listen and Connect

My friends, because of the emotional connection sparked through the career I currently enjoy, individuals frequently share details of their struggles, challenges, and losses with me. Sometimes the details of their lives are shared over lunch, occasionally during flights, and other times after speaking events.

Although few are as dramatic as the story Matt Weiss heard from Jeff Crowther that day, all are reminders that we each endure repeated heart-aches and challenges as sojourners through life. At any given moment, each of us is either in the midst of a storm, gratefully coming out of one, or preparing to re-enter one.

Today, whether meeting with your banker over lunch or your child’s teacher over coffee, whether ordering a latte from a barista or buying a new home from a real estate agent, whether passing through TSA on your way out of town or passing a stranger on your way home, remember this:

Sometimes the only encouragement they might receive during their battle is the spark of your acknowledging smile, your kind words of encouragement, your listening presence of compassion, and the hope extended that they’re going to be okay.

It's Not About You

“Continuous effort – not strength or intelligence – is the key to unlocking our potential.”Winston Churchill “How you doin’?” The…