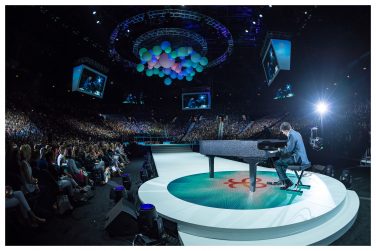 “Life can only be understood backwards; but it must be lived forwards.” – Soren Kierkegaard

Have you ever sat down and asked yourself, “How did I get here?!”

Sometimes it’s after something traumatic or unexpected. Other times it’s after an unexpected moment of great joy, a significant accomplishment, or simply looking back at the curvy road that leads perfectly to where you are today.

For me, one of the most surprising times I asked myself this question occurred as I sat down at a grand piano, at the center of a massive arena, preparing to play. Let me explain.

It was all set in motion earlier that morning.

I was in Las Vegas, at the MGM Grand, partaking in a soundcheck. Later that day, I would be speaking with more than 18,000 amazing consultants from Arbonne.

To be honest, I get a bit anxious before speaking to any group, regardless of the size. On this morning, standing on a stage in a colossal arena, surrounded by seats rising in every direction: The butterflies were soaring!

After completing the sound check, I had a few minutes before the doors opened and the event began. I noticed a secondary stage with a piano.

I walked over to it, sat down, peered both ways for permission – and with no one telling me that I could not – began to gently play. I punched out a few chords from one of my favorite Coldplay songs, The Scientist. Looking around at the cavernous arena, I imagined the rush Chris Martin must feel every time he’s on stage, playing his music, with the crowd singing along.

That’s when I heard someone behind me say, “I didn’t know you played the piano.”

I stopped playing, shut the lid, turned toward the voice, and responded, “I don’t!”

One of the leaders who planned the meeting continued approaching, smiling and saying, “Well, it certainly sounded like you knew what you were doing.” After a pause she added, “Would you play for our Arbonne family today?”

Shifting from Mandate to Choice

My friends, I grew up being forced to take piano. For years, those Tuesday lessons were the worst part of my week! In time, though, what was mandatory shifted into something I loved.

Today, Beth and I have an old piano in our house. On occasion, I play to relax, spark creativity or play for my packed family room – filled with my wife and four kids!

But this wasn’t my family room; it was the MGM Grand. And it wasn’t my kids; it was 18,000 strangers. This wasn’t something I was ready to do! I responded, “I’m not sure it’s a good idea.”

“John, I think it’s a great idea… and it would mean a lot to me and our Arbonne family.”

My friends, after being burned, I longed to survive. Then, I fought to get out of the hospital, to walk again and eventually to feed myself. In reclaiming my life, I was taught a simple response to daily adversity and opportunity: Yes. [Tweet this.]

Perhaps no example better demonstrates the power of living that answer than the image of a little boy, just nine-years-old, with no fingers, still wrapped in bandages, seated in a wheelchair … taking piano lessons! My mom insisted on a simple response to challenges in life: YES.

Saying Yes to the Life You Have Today

Mom didn’t really care about the piano. Instead, what she was saying (without words, but perfectly through her actions and expectations) was, “John, they have taken your fingers, but they’ve not taken your life. Say Yes to the life you have today.”

With that lesson still echoing in my heart and butterflies picking up speed in my stomach, I responded, “Okay. What song would you like me to play?”

She asked what my mother’s favorite song is. After telling her, she said, “That’s what you should play.”

On that day, with 18,000 new friends, I shared the story of how I got here. Of my siblings’ remarkable bravery. My father’s unconditional love. The Hall of Fame radio announcer who kept coming back. The janitor who had transformational pride in his work. The nurse who believed I’d walk when the majority of his colleagues thought I’d die.

And then I told the story of my mother; the remarkable lady whose tough love guided a little boy with no real chance at life to boldly step forward.

She taught me to believe that miracles happen, to fight forward regardless of the adversity, to strive boldly regardless of the unlikelihood of success, and to scream through his life: YES! [Tweet this.] | [Share on Facebook.]

(On the most recent episode of the Live Inspired Podcast, I introduce you to one of my mentors, Tommy Spaulding. He is a true example of how saying YES to life despite despairing circumstances can create an unlikely, yet profoundly, inspired life. If you haven’t yet, say YES to checking out our conversation. Listen to our conversation + watch the video of me playing the piano for 18,000 at the MGM Grand here.)

So, How Did You Get Here?

The ups and downs of your life, the valleys and the peaks, have brought you perfectly to this moment. You find yourself on this stage, seated at this bench, with this audience around you.

Today, rather than spending too much time asking yourself how you got here: Invest the energy deciding what to play next.

Because although it is true that life can only be understood backwards, it is also true that it must be lived forward.

Start playing your next song and saying ‘Yes’ to living forward today.

So how did you get here? Check out the moment I most vividly remember asking this question – captured in video when I played the piano for 18,000 at the MGM Grand, here.

John, I listened to you play that day. I didn’t remember you telling this backstory, and o believe there is a reason I read it today, when I needed it. Thank you for all you do. Arbonne loves you.