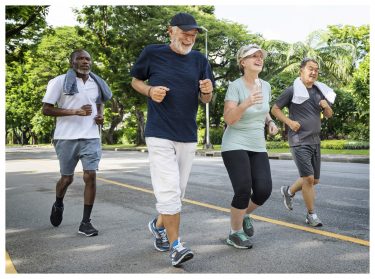 What the ‘Iron Nun’ Can Teach Us About Active Aging

“To change the world around you, give the world what you have, and serve the world with all you are.”– Printed on medal awarded for the World Harmony Run

At what age is something just no longer possible?

At what age is taking up a new hobby, switching careers, quitting a bad habit, or beginning a passion project simply an impossibility? At what age is it no longer possible to decide that the person you’ve been does not need to define the person you will become?

I’ve met many individuals who have achieved some remarkable successes at advanced ages.

One of the most remarkable lived in Cedar Falls, IA. She was the president of the local book club association and lived in a retirement home. I went to visit with her and was moved by her spunk, charisma, quick wit and passion for new information. All at 109-years-old!

And as exceptional as that meeting was, perhaps my favorite individual who reminds me that none of us are ever too old to start is Marie Dorothy Buder, now known as Sister Madonna Buder, S.F.C.C. Let me explain why.

Sr. Madonna spent decades serving the downtrodden with her community. But a chance encounter at age 48 put her on a path that would change the trajectory of her life – and countless others.

While speaking to a priest friend about the nagging anxiety that engulfed her days, he asked some questions to learn more. He then asked if she ever ran.

After responding that she did not, the priest encouraged her to consider going for run. A simple suggestion with the hope not to eliminate anxiety but perhaps to alleviate it a bit, lead this woman, approaching her fifth decade of life, to lace up a borrowed pair of tennis shoes and go for her first run.

Simply putting one foot in front of the other, she took a short run that evening. Sr. Madonna enjoyed the way she felt, and she made a commitment to go again the following day. And after that run she committed to going again.

In the four decades that have followed, rare are the days when she doesn’t lace up those shoes and still go for a run.

One foot in front of the next, this late-bloomer ran her first marathon at age 50. She’s run more than 350 in the four decades that have followed.

Seriously. You just read that and didn’t spit out your coffee?!

This little nun has run more than 350 marathons, won dozens of races within her age group, and she didn’t even own a pair of tennis shoes before turning 48.

And she wasn’t finished.

Always enjoying a new challenge, at age 55 she competed in one of the most physically demanding races, an Ironman. The race requires more than two miles of swimming, a 112 mile bike ride and a 26.2 mile run to finish.

Since that first Ironman, she’s run several dozen more and is the oldest person to ever complete one. This Iron Nun successfully completed one at age 82.

With each race she raises money for one specific person, one worthy cause. She’s been featured in a Nike commercial, is actively promoting the World Harmony Run, and has inspired millions with her passion for service, dedication to goals, and example that it’s far better to wear out than to rust out. [Tweet this.] | [Share on Facebook.]

(Still vibrantly alive at 88, I had the great pleasure of visiting with The Iron Nun, Sr. Madonna, on our most recent Live Inspired podcast. Borrow a pair of running shoes and sprint over to the show. We talk about her calling, her first run, her training, her reason behind the runs, her outreach work, and what she thinks about active aging. You’ll love the show…and you’ll love my guest on it. Listen here.)

No, for Sr. Madonna it’s always been about responding to the call. Every day provides her a sacred and important opportunity to put to use with absolute passion and gratitude whatever talents she’s received.

And it’s her hope that in observing her life, we’ll be open to boldly responding to calls to serve in our lives, too.

So, go into the furthest corners of the closet. Grab the old, dusty, out-of-style, and seldom worn tennis shoes. Do a few stretches. And then head out for the run of your lifetime.

It’s true that it is never too late to make a pivot in your life.

It’s also true that in doing so, you’ll not only become an even better version of yourself, but you’ll serve as inspiration to those of us cheering as you run past.

Is there anything you’ve wanted to do or try, but now feel like it may be too late? Share in the comments below. #StartNow #NeverTooLate

“Life is what we make it, always has been, always will be.”  Spending time sharing about misfortunes professionally, mishaps financially,…

Start with This Simple Reminder

John O'Leary shares one simple, surprising reminder to keep in mind during the complex days of the pandemic. "It's not…