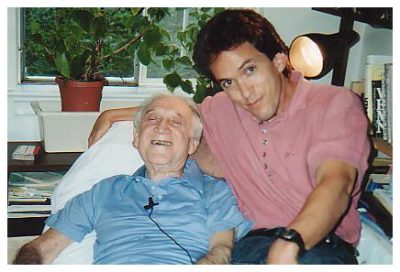 What Mitch Albom Learned from his Tuesdays with Morrie Schwartz

“Do you go by Mitch or Mitchell?”

My friends call me Mitch.

“Then I’ll call you Mitch. Because I hope by the end of this semester, that you will consider me your friend.”

And so began an unlikely friendship that would bring two men, separated by almost four decades in age, together as friends for a semester of Sociology 101.

It was a friendship that would dramatically impact both student and teacher in profound ways they could never have imagined on that first day of class.

And it was a friendship that has gone on to directly impact more than 14 million lives around the world. Let me explain.

As a freshman at Brandeis University, Mitch Albom became enthralled not simply by sociology, but by the vibrancy with which his professor conveyed it. In fact, Mitch was so inspired by Professor Schwarz, he registered for a class with him every semester thereafter. And in turn, the professor asked that the student call him a more endearing name: Coach.

Upon graduating university, the student gave Coach a leather briefcase as a token of his appreciation for all he’d learned about life from his teacher. Coach, otherwise known as Morrie Schwartz, gave Mitch a hug and then a final assignment: “Promise me you’ll stay in touch.”

I promise I’ll stay in touch with you, Coach.

Mitch made the promise. And then he broke it every day for almost two decades.

The Burden of an Unkept Promise

Graduation was followed in rapid succession by an opportunity to begin a career writing about sports. Mitch excelled, became an award-winning journalist, an ESPN broadcaster, a daily radio show host, and a prolific writer. Like so many of us, seldom did Mitch look around at the abundant gifts he’d received. And even less frequently did he pause to celebrate and thank those who guided him there.

But the professional sprint slowed enough that one Friday night he sat on his couch, flipped on the television, and stumbled into watching Nightline. Ted Koppel was sharing the story of how a seemingly ordinary professor, with the terrible diagnosis of Amyotrophic Lateral Sclerosis, could remain so positive, so generous, so alive.

Mitch was overcome with emotion when Ted Koppel shared the name of a professor from Brandeis University: Morrie Schwartz.

Mitch Albom watched the interview, stunned and saddened. The following morning, he tracked down the phone number and called his old friend.

When Morrie answered, Mitch awkwardly said, I don’t know if you’ll remember me. My name is Mitch Albom.

Dying with ALS, but still exuding life, Morrie responded lovingly, “Why didn’t you call me Coach?!”

The following Tuesday Mitch flew to visit with his favorite teacher at his home in Newton, MA. After a long visit recounting the life both had lived in the 18 years since their last visit, Mitch asked if he could come back and visit him next week.

He kept the promise.

And he continued the visits every Tuesday for the next several weeks.

Sharing the Legacy of Morrie Schwartz

Realizing the end was near and the anxiety Morrie had about leaving significant medical expenses for his family, Mitch had an idea. What if he distilled the life lessons he was receiving from Morrie into a book? Neither of the men were sure it would sell, but they figured it was worth a try!

Even with Mitch’s media connections and significant platform, every publisher turned down the seemingly dark, tragic story of an old teacher dying of ALS. Finally, a single publisher, Doubleday, agreed to take the gamble, printing 20,000 copies.

In the 20 years that followed, Tuesdays with Morrie has become the most popular memoir of all time, has been translated into 45 languages and has sold more than 14,000,000 copies.

The simple sociology teacher with a love of dancing, giving, love and life, continues to teach two decades after his death.

(I caught up with Mitch Albom for our most recent Live Inspired podcast. As amazing as the story of this book and the lessons within it are, the example of Mitch Albom’s life today is even more spectacular. Do yourself a favor and listen to our conversation here. You’ll be reminded to slow down, give generously, and grab onto what matters most in your life.)

In one of their final visits, the two friends sat together. Coach, lying motionless in bed struggling for breath, but at peace with it; the young journalist, observing how generous the teacher was with everyone who came into his room, and struggling to understand why.

Coach, why are you so kind, so generous, so present with everyone? How do you keep giving to all of us, even though you are the one dying?

Morrie looked over to him and responded tenderly, “Taking makes me feel like I am dying.”

There was a long pause, the simple act of breathing now required significant effort. Morrie then added, “But giving…giving makes me feel like I am living.”

It was one of the final lessons Mitch Albom received from Morrie Schwartz, but it’s one that dramatically altered the arc of his life.

Although still extremely driven and successful professionally, Mitch has learned the blessing of slowing down to be present with others and serve them.

The internationally known, best-selling author, journalist, radio and television broadcaster, and musician makes time to actively serve almost a dozen charities, including an orphanage in Haiti where he physically volunteers at least four days each month.

If Morrie is right, and giving is living, Mitch is very alive indeed.

And my friends, his example is our daily invitation to lead, to live, to serve and to love as if we are fully alive, too. 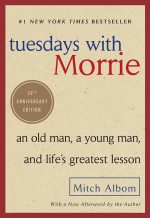 Those Tuesdays with Morrie continue to impact the way Mitch lives, leads and loves today. If you had the opportunity to have weekly conversations with anyone living or dead, who would it be? Share in the comments below.

4 replies on “Giving is Living”

Thank you for this blog. I read ‘Tuesday’s with Morrie’ several years ago. I enjoyed it and felt as if my own parents or grandparents were giving me advice.
My grandmother died from ALS when I was only 14 years old. I understand how horrible that disease truly can be.
If I could talk to anyone each week I would be hard pressed to pick just one person but I suppose it would be my mother. She died 17 years ago and I never said goodbye. She had cancer and I didn’t understand that she was going to leave this earth that night. I was pregnant with my youngest daughter and my oldest was at home with the stomach flu/bug. I have missed her every day since.
My mother was such a wonderful lady. Had had endured much during her lifetime in both illnesses and sadness from different situations but was always there for me.
My father passed away in November and my only saving grace from the heartbreak of his death is that my parents are in heaven, together again.

Susan, thank you for sharing. Your mother sounds like a strong woman and role model. I’m happy you receive comfort knowing your parents are together in heaven, looking down on you proudly. Thanks for being part of the Live Inspired Community. J

Thanks John for your inspiring story you shared with the Custom Forum at Edward Jones a couple weeks ago! To answer your question, who would I want to visit with weekly, it would be my Dad, he died in 2014 after a week of lying in the ICU after a stroke. I miss him every day! He was so good to everyone, he loved to laugh and make people laugh, and he was a wonderful father to all 4 of us kids and a very loving husband to my Mother. Most importantly, he was a Christian, which makes the sorrow a little sweeter, knowing that someday – I will have all the time in eternity to sit and visit and laugh and sing with my Dad!

Brenda, thank you so much for sharing. Please make sure to laugh in honor of your father today. What a wonderful thing to be remembered for; his love of laughter… stay ON FIRE, Brenda! The best (and eternity!) are yet to come. J