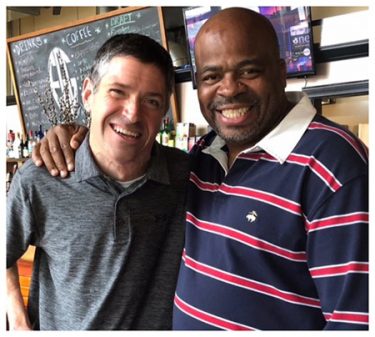 Have you ever wondered if it’s too late to start?

Maybe you felt it around beginning a new project, rectifying a teetering relationship, or making better choices in your health, or finances, or business?

If you’ve ever thought it’s too late to change, you should meet Andre Norman.

You see, Andre spent the first seven years of his life in abject poverty, disregarded by his immediate family. He grew up watching his mother being repeatedly abused by his father within their house and accustomed to the sounds of violence echoing throughout the neighborhood around his house. Having no guidance at home, and with little encouragement at school, he remained completely illiterate entering into the 4th grade.

He finally found a sense of meaning and community when he joined a gang while in middle school. The decisions he made within his gang steered him in and out of juvenile detention during his early teens, and lead to a state prison shortly after his 18th birthday.

And that’s when things got worse.

Andre felt victimized by his upbringing, hatred toward his father, and anger at his circumstances. He was convinced the only way to show real power was through violence.

Over the following six years, this angry young man was transferred to eight different state prisons, convicted of two attempted murders, began one prison riot, and spent two years in segregation on 24-hour lockdown. Refusing to change directions, he ended up precisely where he was heading.

Until things began to change.

At 24, with a long rap sheet, limited education, and little chance of ever leaving prison, Andre began envisioning a new life. He imagined breaking free from his past, setting a new direction going forward, and leading a radically different life. In his dreams, he saw himself beyond the walls, walking freely and even had the wild notion he’d one day graduate Harvard University.

The convicted felon with no future began walking a different path. He taught himself to read, became a voracious reader and got his GED. He became a sponge of new information, an articulate writer, and a scholar of the law.

Andre Norman also began meeting with people who brought him out of the shadows and into the light.

He met with a mental health counselor to better understand, manage and eventually exile the demons of anger and rage. He met with a rabbi named Natan Schafer who taught him about personal responsibility, ethics, and forgiveness. Andre met two remarkable nuns named Sr. Kathleen and Sr. Ruth who taught him about kindness, humor, and charity. From these new friends, Andre began to see that he was worthwhile, that real greatness starts with serving, and that he possessed gifts that might help others.

A decade and a half after entering prison as a hate-filled, violent, teenage boy, a wiser, more compassionate, more thoughtful man was released from it. He committed to not only doing better, but encouraging those most at risk to learn not only from his mistakes, but also the possibility displayed through his new life. He was now convinced that the only way to show real power was through love.

Andre spent eight years doing outreach to gang members from Boston to Los Angeles. He spent time with addicts, gang members and drug dealers learning their story and what lead them down this path. He then shared his own journey and offered a different, difficult, but possible path forward.

(I met with Andre Norman for my most recent Live Inspired Podcast. With all the negativity surrounding our cities, race relations, politics, and the punitive system, listen to an amazing man who doesn’t bristle with hatred, but brightly beams with solutions. Listen here.)

What Andre’s Example Means to Each of Us

My friends, although few of us will ever know the painful journey Andre traveled, we can all identify areas within our own life that are far from perfect. The painful truth that altered Andre’s life was that if he didn’t change directions, he would assuredly end up exactly where he was heading.

But what liberated him was similar.

When he finally decided to own his life, to alter his life’s trajectory, to surround himself with life-giving people, and to view himself as being worthy, he ended up exactly where he is now heading.

This same redemptive realization will most assuredly apply in your life, too.

1 reply on “Choose a Different Path”

John, loved the pod cast with Andre Norman. What a story and comeback for him. So much needs to be done with our Prison Systems.

I listen to most of your podcasts while driving. I also forward them to my kids, nieces and nephews. Good stuff. Keep them coming!

Which One Would You Choose?

A New Lens for Old Photos “When I look at my old pictures, all I can see is what I…

“Today, I vow to notice the good before the bad…the right instead of the wrong…the blessings above the inconveniences…the strengths…