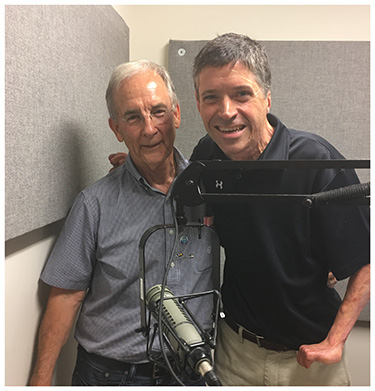 As an eight-year-old, I remember belting out these words convinced I sounded in sync with Stevie Wonder, on par with Cyndi Lauper and, quite frankly, slightly better than Michael Jackson.

The song featured contributions from the biggest musical artists of the day. They came together, sang together and made a profound difference together. We Are the World became the battle hymn unifying voices, attention and dollars around the world to serve the starving population affected by drought throughout Africa. More than $40 million was raised through this collaboration and song.

Even more, it inspired tangential efforts. For example, the following year Hands Across America created a human chain spanning coast-to-coast. The organizers imagined people of all demographics united to further the cause. In May 1986, their vision became reality with $30 million raised and 4,000 miles covered by 6 million individuals, linked arm-in-arm. My family accounted for eight of them.

Dad drove our family far from the city, away from the crowds, hoping to help ensure the chain would stretch. As we drove deep into the country, I was shocked at how many people lined the rural highway. Our car eventually stopped at a desolate spot at the end of the chain. My family got out and linked arms. Then, more cars came, parked and joined the chain.

Soon, the chain expanded over the hill and out of sight. Cars drove by honking encouragement, news helicopters flew overhead capturing images, and I felt a deep sense of pride holding hands with strangers singing, We Are the World.

Eventually, though, we let go, climbed back into our station wagon, and went home.

Tom Logan, on the other hand, didn’t go home. This gentleman from Southern Illinois got back in his car and went to work. Work that continues three decades later.

A Leader Emerges to Continue the Work in Africa

You see, Tom didn’t stop with a simple act or donation. He began asking why were these people starving? How did their water run out? What can be done to ensure it doesn’t happen again? He wanted to know why more than a million people died from the drought, why hundreds of millions of people were without clean water in Africa, why the majority of hospital beds in sub-Sahara Africa were occupied with patients suffering from water-related-illness and why more than 4,000 children were dying because of unsafe drinking water… each DAY.

He learned there was a desperate need to access clean, sustainable water sources. Armed with this knowledge, Tom connected with a few like-minded friends, traveled to Africa, and built a simple, sustainable well for a small village. No, it didn’t change the word, but it made a profound difference in the lives of the people in the village.

The following year he raised a little more money, recruited a few more volunteers, and returned to Africa to build three more wells. After each trip, he returned home more inspired, dedicated and determined. In the three decades since, Tom and his team have dug 30,000 wells. They’ve taught the local communities how to maintain the wells. In doing so, they’ve provided clean water across more than 57,000 square miles of rural Africa, impacting hundreds of thousands of lives. One well at a time.

(I was introduced to Tom Logan by a loyal Live Inspired Community member and podcast listener, Kimberly. My friend, heroes seldom wear capes, have superpowers or live in Gotham. More frequently, they wear jeans, have a humble heart and live in ordinary communities. Check out this podcast. You’ll meet your newest hero. You’ll love him… and you’ll see your own ability to be a superhero through his story. Listen here.)

How to Deal with Negativity in the News

With so much negativity politically, socially, and globally, we’d benefit once again from celebrities coming together to sing about possibility and unity. We’d also benefit from a human chain of diverse individuals linking hands with one another connecting across the United States and around the world.

But what we’d benefit from most is regular individuals, like you and me, seeing a problem and striving to solve for it. While villains like to point out the bad stuff, cross their arms and complain about it; heroes uncross their arms, open wide their minds, and take bold action to make the world a better place. [Tweet this.] | [Share on Facebook.]

And in our own, ordinary lives, we can do it one person, one hand, and one well at a time.

Tom Logan has a bumper sticker that reads: “Darkness cannot drive out darkness. Only light can do that. Hate cannot drive out hate. Only love can do that.” It certainly sums up his life of reflecting light, love and possibility! So, my friends, what bumper sticker would you like to sum up your life? Post your answer in the comments below. For every comment we’ll donating to Tom’s life-giving charity: https://www.mmmwater.org/.

8 replies on “Grab Your Shovel”

I had “What are you grateful for?” on my old car — I need to get it again!

Empathy is the Lord’s passion. He has many passions, such as compassion. Can you think of more passions that He might have?

“We can create the life we want. If you don’t like the life you have, change it. “

My bumper sticker is TEACH LOVE

Arms are for hugging! (not original but not sure where it came from)

Just watched a video of John playing Amazing Grace on the piano in front of 18,000 people at an event. John is one of my most favourite humans 🙂 I met him at a company event in St Louis a few years ago when he shared his story with us. I have been inspired by his awesomeness since that first day we met. John is inspiration. John is courage and strength. John is love. John is making the world a better place. Be like John 🙂

Be the change you wish to see in the world 🙂