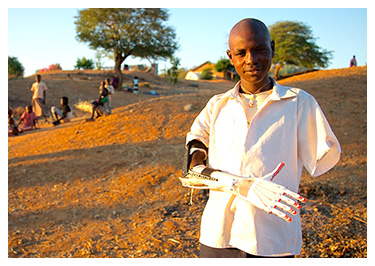 “Impossible is just a word thrown around by small men who find it easier to live in the world they’ve been given than to explore the power they have to change it. Impossible is not a fact. It’s an opinion. Impossible is potential.” – Muhammad Ali

If you’re like most, these are your likely reactions when you think of the word “Impossible.”

But what if that word just means “not yet” rather than never?

Consider this: every existing building, bridge, vehicle, technology, and medication was at one point considered impossible. In fact, every single tool we use, every system we enjoy, every human accomplishment we have attained was considered an impossibility before it became a reality.

What does this reality mean for you, the challenges we face and the future before us? Mick Ebeling certainly know what it means to him.

Not Impossible Labs’ EyeWriter Starts a Revolution Against the Absurd

The notion of making things better was etched into Mick as a child. Whether hiking with family at a state park or hanging with friends at school, he was challenged by his parents to leave everything better than he found it.

Later in life, Mick turned this not only into a mantra, but into a business that is challenging current thinking and changing countless lives through technology and story. He searches for things that are broken, unfair, and considered impossible. Mick then surrounds himself with bright, divergent thinkers, and together they discover ways to make the impossible a reality.

They call it a revolution against the absurd and it’s a war they’re winning.

This revolution started almost a dozen years ago when Mick learned that renowned graffiti artist Tempt One had developed ALS. Paralyzed from his neck down, he was unable to create his art. Bothered that Tempt had so much life, creativity and possibility within him, but was unable to unleash it, Mick wondered if it might be possible for the artist to create again.

With his team, they created the EyeWriter. For the first time in years, Tempt One was free to create art again. First, onto a screen, but Mick’s team eventually tied the tool to lasers allowing Tempt from his hospital bed to create public art again outside the confines of his hospital room.

Driven by a belief that if you help one, you can help many, they then put all their research from the project and instructions on building the EyeWriter online so others facing similar challenges could create their own.

But that wasn’t the end. It was just the beginning.

The team at Not Impossible Labs continued seeing things they felt were absurd, broken, impossible. And they kept asking the question, What if?

Their audacious way of viewing the impossible, freely asking questions, and living with beautiful, limitless naivety continues leading to innovative transformation around the country and around the world.

They’ve discovered a way to use 3D printing to create prosthetics for those in war-torn parts of Sudan, freed a jazz musician with Parkinson’s disease to play the piano again, gave a man who hadn’t spoken in more than a decade due to ALS the chance to rediscover his voice, helped a little boy losing his sight to see again, and much more.

(I interviewed Mick Ebeling on my most recent Live Inspired Podcast. To hear these amazing stories, to learn more about this remarkable man, and his ridiculous team at Not Impossible Labs, listen to our interview. After nearly 100 episodes interviewing some of the most extraordinary individuals from around the world, I’ll tell you this was possibly the most inspiring yet. Listen here.)

What Mick Ebeling’s Example Means in Your Life

Challenging current thinking. Determining to make things better. Seeing around you things that are broken, unfair, impossible. Surrounding yourself with bright, divergent thinkers who come together to discover ways to make the impossible a reality.

What if this was not only Mick’s idea at changing lives through storytelling and technology, but your mantra at making the world, starting with the one you see in the mirror, a little better today than it was yesterday?

What if you applied this in your school, in a classroom or with one child?

In your business, your teams, your projects?

What if instead of being about someone else doing the impossible in their lives, it was about you living with beautiful, limitless naivety in your own life?

My friends, it turns out that impossible is just a word thrown around by small people who find it easier to live in the world they’ve been given than to explore the power they have to change it.

Impossible is not a fact, but an errant opinion.

"You don't need to know precisely what is happening, or exactly where it is all going. What you need is…