Look Fear in the Face 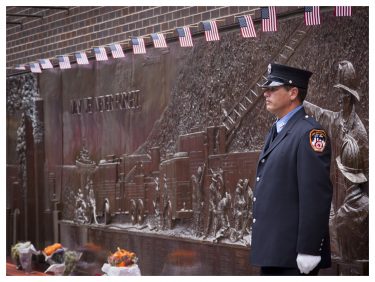 How Jack Buck’s Response to 9/11 Changed Me

“You gain strength, courage and confidence by every experience in which you really stop to look fear in the face. You are able to say to yourself, ‘I lived through this horror. I can take the next thing that comes along.’” -Eleanor Roosevelt [Tweet this.] | [Share on Facebook.]

It was about to happen.

After lots of planning and working more than two years with no vacation, I was going on a once-in-a-lifetime, ten-day trip to northern Europe. My sister, Susan, who had recently graduated college and was about start her career in Chicago, was going with me.

Our bags were packed, the tickets purchased, and the hotel rooms secured. The anticipation was high as we counted down the days until we departed: September 14, 2001.

But just a few days before our planned departure, the entire world changed.

In the days following the attacks of 9/11, we learned of a terrorist group very few of us had ever even heard of. We watched nightly, the agonizing stories of those who had lost their lives – and the incredible heroes who had given everything so that others’ lives might be saved. And we heard the drums of war that would soon ensnarl our nation and the world and that continue to dramatically shape lives and global events today.

As a nation, we weren’t sure how to return to normal – or if we really ever would. In our papers and on the news stations, there were continuous images of planes disappearing into buildings, city blocks of rubble smoldering, family members holding pictures of their missing loved ones, and search crews working around the clock.

There was also the very real concern that more attacks were imminent. In the days following September 11th, rumors suggested that other hijackings and attacks were planned. All high-risk targets like government buildings, nuclear power plants, and water treatment facilities were protected. Military planes patrolled the skies around the clock. All commercial flights were grounded, and all public concerts and sporting events were cancelled.

The first national sporting event to occur after the attacks took place in my hometown, St. Louis. ESPN broadcasted the momentous occasion, live to a nationwide audience. An audience unsure if it was safe to venture into a packed stadium; unsure if it was appropriate to laugh, cheer, root and begin the painful, but necessary, movement forward.

That day, on an evening we expected to be in Norway, I picked Susan up in an old SUV, drove downtown, and we walked, tepidly into a packed stadium.

The crowded stadium was veiled in sadness and mourning, but it transformed when a group of firefighters, police, and first responders carried a massive flag onto the field. And 50,000 people stood as a pained silence fell over the stadium to honor all those who had lost their lives.

Then, we stood in awe as my lifelong hero, Jack Buck, shuffled onto the field. Jack had been the voice of St. Louis Cardinals baseball for generations, but he also was a veteran of World War II, earning a purple heart. Although he was nearing the end of his own life, battling both cancer and Parkinson’s disease, on this evening, he became the voice of a nation struggling with a sense of hopelessness and fear. This seasoned warrior, voice softened due to health issues, stood resolutely before the stadium and a nation watching at home, and read a poem he’d written.

Love is More Powerful Than Fear

I don’t remember who won the baseball game that night. I don’t recall what Susan and I talked about on the way home. But I do remember the emotion that overcame me as I watched Jack Buck read his poem and shuffle away from the microphone. His words, and example, reminded me that in every generation we gain strength, courage and confidence when we stop to look fear in the face, reminding ourselves we lived through this horror and we can most assuredly take on the next thing that comes along.

It’s easy to see it in our brave firefighters, police officers, first responders and war heroes.

But the sacred opportunity set before each of us daily is to be the example so that others see it in the way we lead, serve, love, and walk forward.

It mattered 17 years ago this month. It matters still today.

Put a Face to It

Understanding and Tackling Modern Day Slavery “We are only as blind as we want to be.” - Maya Angelou [Tweet…

After writing my blog about how we can respond to the bombing in Boston, I found this poem by Sarah Nean Bruce inspiring…