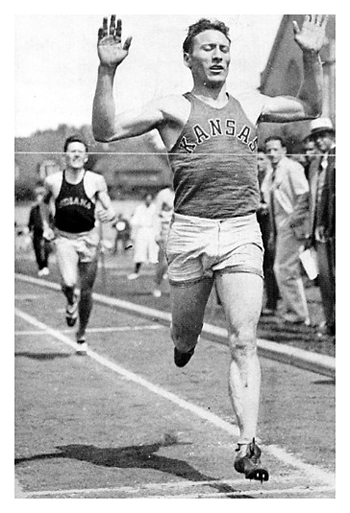 Choosing to Live a Life of Significance

I introduced you to Glenn Cunningham already.

You know, the man who was terribly burned as a kid, learned to walk, started running, became an Olympian, and decades later encouraged me to never quit?

Well, if you read the Wikipedia article about him, that’s all you’d know because it describes his burns as a boy and recovery afterward. It describes his rise through the ranks of running— beginning in high school, then college, on to the Olympics, and culminating in Glenn’s being regarded as the number one runner in the world. The article lists races, locations, times, and finishes. It mentions he retired in 1940. But I would argue the forty-eight years between his retirement and his death were the most magnificent and impressive aspect of his life—and perhaps any life.

You see, after coming home from the Olympics, Glenn got married and began to raise a family on a large ranch in Kansas. He and his wife, Ruth, had three children when they learned about a Russian family who had been displaced during World War II. Glenn and Ruth discussed this family, their needs, and eventually invited this struggling family to live in their tenant house for a few years.

After he retired from running, Glenn began speaking to groups around the country. He was so inspiring, faithful, and clearly of high character that letters began arriving at his ranch from audience members. They’d thank him for his time, his story, his accomplishments, and his encouragement. One note even told the story of a struggling child, the challenges he faced, and ended with the parent of the struggling young boy asking, Could Tommy come stay at your ranch for a bit?

Glenn and Ruth already had three kids. They were busy on the ranch and life was hectic on the road.

But they also felt a slight tug of discontent, a belief that they could do more. After all, they had plenty of land, owned a twelve-room house, and weren’t filling it up. With some creativity and frugalness, they decided they could financially support another child for a while. What would it hurt to have one more kid to fill those rooms and join the family?

So they said yes.

(My friend Amy Jo Martin struggled with discontentment, too. On the outside she was on top of the world, managing clients like Shaquille O’Neal and Zappos. On the inside, she was dying. Exhausted, she realized she had a big “purpose problem.” Join us on Live Inspired Podcast #97. Meet Amy Jo, hear how she reset her life to choose significance over success and how she is living a truly inspired life here.)

Glenn Cunningham and the Yes Life

Glenn and Ruth proved to be outstanding parents and guardians. Soon, other families were writing asking if their kid could stay at the ranch. The Cunninghams’ answer was always the same: yes.

Eventually, Glenn and Ruth had twelve children of their own. But they made no distinction between those they brought in from the outside and those born of their own flesh and blood. The children were all considered the Cunninghams’ own and received unconditional love. In return these kids were expected to follow rules, do chores, and help take care of the animals on the ranch. In other words, they were part of the family.

Ruth and Glenn opened wide their hearts and their home. Over more than four decades they had served, raised, fostered, and encouraged more than nine thousand children.

Not many people today can say that.

It wasn’t easy financially. It was endless work for both of them. But they made room for those children, knowing whatever love and respect they could provide to them would make a difference in their lives.

How You Too Can Live a Life of Significance

Glenn Cunningham clearly knew the power of the question What more can I do?

It guided him from a hospital bed with severe burns on his legs to a podium with medals around his neck. It motivated him from his comfortable house with three kids to his being a change agent for good impacting thousands of youth. And it elevated him from a life of success and status to one of significance and impact.

They don’t run races, build businesses, raise kids, and live lives for themselves; they do these things to make a difference for others. These people hold hands, move hearts, give love, and impact lives. Through these activities, achieving this kind of victory, the fire burns long after they are gone.

You don’t need to be an Olympian to start.

No, you just need to serve where you’re able.

You just need to live a yes life.

The White Flag of Victory

“The real winners are not those at the top but those who have come the farthest over the toughest roads.…