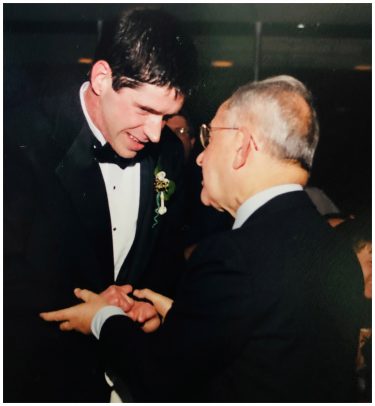 Dr. Ayvazian on the Victor’s Shift

With just a few days left before I was to be released from the hospital, there was a knock at my door.

It was Dr. Ayvazian.

He had greeted me in the emergency room months earlier. He had been with me through the five months, the two dozen surgeries, and the daily procedures. Besides my parents, he was the one person I saw every single day during my time in the hospital.

Even though I was still angry that he’d taken my fingers, I loved Dr. Ayvazian.

He was short, wore glasses, was always smiling, had a twinkle in his eye, and spoke to me as if he understood what I was going through.

You see, as a child he was in a fire. He had scars all over his legs. Because he always wore dark suit pants, I never saw them, but you don’t need to see scars on people to know they’ve been burned. You can see it in their eyes. You can hear it in their voices. You can feel it in their compassion. This man understood. He was incredibly empathetic, friendly, and a world-class surgeon. He would end every visit by saying, “Good-bye for now, my little comrade.”

I never told him, or asked anyone else, but as a kid I had no idea what a “comrade” was. The only time I’d heard the word was in movies. Usually the person saying it was Russian. “Little comrade,” huh? Okay. Um, is that good or bad?

On this visit, a week before I was going home, he came into my room in the middle of the afternoon. He turned off my television, sat on the bed, and smiled at me. “John”—his eyes shone with emotion—“your recovery is miraculous. I have never seen anything like it in my entire career. I am so glad that you’ve had the support of your friends and family, and their many prayers that have gotten you to this day.”

“But, as difficult as the past four months have been, the journey forward will be equally as challenging.”

I nodded. I knew what he had to say was important. Even as a kid, you know. I also knew that he was sharing this because he had walked the road himself.

He cleared his throat. “John, do you know that you can still do almost anything you want in your life? Perhaps you won’t be a court reporter, but you can be a lawyer or a judge. You may not play baseball again, but you can be a manager or own a team. You may not be able to be a carpenter, but you can be a general contractor and build incredible things. John, if you want to get married and raise kids and have an incredible life, you can! You are a remarkable little boy; you can still live an amazing life. You’ve endured something terrible, but the best is yet to come. The way I see it is, you can either be a victim to this tragedy or you can rise above it and be a victor. It’s your choice.”

He bent down and kissed me on my forehead.

He stood, walked away from the bed, slid open the door to leave the room, then turned back. “Good-bye for now, my little comrade.”

Those words, that visit, have stuck with me for almost thirty years. I know he was a busy man. He could have just crossed me off his list. I was being released; his work was done.

But he wanted to do more. He wanted to express to me that I could choose to look at what I could no longer do, or I could see the opportunities that were still available.

Without people to show us what is possible, we can forget the power we all hold to make an incredible life.

This man was an exceptional leader of his staff. He worked round the clock on my care. He was supremely dedicated to all of his patients. He also cared enough to ensure that we not only would be pushed out of the hospital, but might someday walk boldly back into life.

(There have been several doctors who have profoundly impacted my life. Most of those doctors for the better. But not all. On my most recent Live Inspired Podcast, I shared three stories that I know will inspire and touch your heart as you get ready to walk boldly back into your life. Check it out here!)

Encouraging Others to Embrace the Victor’s Shift

My friends, that conversation with Dr. Ayvazian occurred more than three decades ago. And yet not only do I remember it in great detail, I remain directly and dramatically influenced by it.

You see, although I did not become a court reporter, I have written a #1 national bestselling book and have shared my heart via this newsletter for more than a decade. Although I never did play baseball, I’ve had the pleasure of speaking with several Major League Baseball franchises – and have even thrown out the first pitch. And although I never became a carpenter, I did in fact spend more than a decade of my life as a general contractor building incredible things.

As a little boy, I struggled mightily seeing beyond the adversity that engulfed my daily life. And I’m convinced I’m not the only one who has felt that way.

It turns out that sometimes when we find ourselves struggling, we just need advocates willing to enter into our lives reminding us that the way forward may not be easy and it may not be at all like we expected, but it is possible, we aren’t alone, and that the best is yet to come.

On this day, the 24th of December, I wish each of you a very Merry Christmas, Happy Holidays, and the best to you in the year ahead.

The above story is adapted from ON FIRE: The 7 Choices to Ignite a Radically Inspired Life. To celebrate other heroes that came into John’s life and intimately served him and his family, pick up your copy today!

The Critic and The Choice

“It is not the critic who counts; not the man who points out how the strong man stumbles, or where…