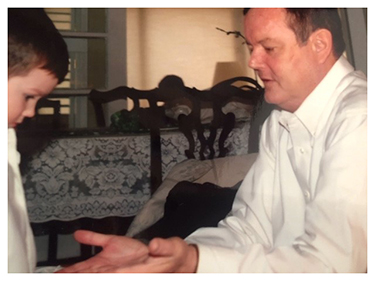 Unfortunately, almost every family has suffered the cruel diagnosis of cancer.

My wife and I have experienced it several times as friends, neighbors, nieces, uncles, aunts and grandparents have been diagnosed with it. We also went through this brutal journey with her father, Joe.

Upon diagnosis, we were crushed to learn he had pancreatic cancer, it was inoperable and it was terminal. During the six months he was treated for it, we tried as frequently as possible to get together as a family. We wanted to be more present, to spend more time, to hear his stories and to share our love.

Throughout the months of treatment Beth and I also spoke a great deal with our children about his cancer, about the gift of life, about the reality of death and about where we believe we go when we die. Although our kids were young, we didn’t want them ignorant of the approaching loss of their Papa Joe. We also wanted them to know that there was reason for hope, basis for peace and even cause for joy during this incredibly difficult time.

Heaven, as Understood by a Child

A few days after Joe passed away, we gathered as a family to celebrate his life at a funeral parlor. Before the doors opened for the community to say their goodbye, Joe’s mom, his five siblings, his wife Mary and their four kids gathered. Surrounding them were in-laws, grandchildren, cousins and extended relatives. The place was already packed and the doors to the public weren’t even open yet.

Joe’s good nature, playful personality and continual generosity always brought people together while he was alive. He was proving he could still do that even in death.

After a beautiful prayer, we sat in the chapel in total silence and with a great deal of sadness.

As the silence intensified, I felt a little pull on my suit coat. Looking down, I saw my oldest son looking back at me. Jack, just four-years-old, wore a clip-on tie, dark sport coat and khaki pants. His blue eyes sparkled, but his face exhibited confusion.

“Dad, can I ask a question?” He whispered, but with a decibel level causing it to echo throughout the hushed room.

I bent close to him, put my left arm around him, and responded, “Sure buddy. What is it?”

Looking around the room, then back at me, he asked, “Dad, is this heaven?”

We always told the kids that heaven would be an indescribably beautiful place where they would go when they died, be with God and be surrounded by all their friends and family.

I looked away from Jack and noticed the candles burning up front and flowers all around. There was an open casket centered in the room. Papa Joe was there and the room was packed with family and friends

I realized we had chatted so much about his Papa now being in heaven, that for a little boy, looking at a casket, still seeing the Papa he loved there, this was incredibly confusing.

I pulled him a little tighter to me, smiled at him and said, “That’s a very good question. But, no, Jack. This isn’t heaven; this is a funeral parlor. And that might be your Papa’s body, but the best of him, the real him, is already in heaven. You can’t see him, but he sees you. And he still loves you very much.”

Jack, appearing a bit relieved, looked at the casket, then back at me, and responded, “Good. Because I was sure hoping heaven would be better than this place.”

So, What is Heaven?

Almost a decade after Joe’s death, my wife and I still talk to our kids about his life. We frequently share our favorite memories of their Papa Joe.

And we talk about the gift of life, about the reality of death and about where we believe we go when we die. We share that life is not always easy, but that the best is yet to come.

We believe that there is a heaven, that we’ll meet God there and that once there we’ll be surrounded with friends and family.

And we believe it will be a heck of a lot better than some funeral parlor.

What happens when we die? Is there another life? Why are we here? These are questions we’ve wrestled with since the dawn of humanity. I’ve had the pleasure of meeting some amazing people who have had near-death experiences. Many share similar stories of the peace they felt, the experience they had and the hope they now have.

One of the most documented cases is that of a neurosurgeon named Dr. Eben Alexander. He was Duke trained, taught at Harvard, clinically driven, incredibly bright and agnostic spiritually, but his experience spending a week on life support with limited brain activity changed his life. In fact, Dr. Alexander believes he experienced heaven. I interviewed Dr. Alexander on our most recent Live Inspired podcast to learn about his experience. Although some of his ideas are radical and differ a bit from my understanding, our Live Inspired community is all about believing so strongly in our own personal beliefs, that we freely listen to others who have different beliefs. It’s a fascinating conversation. So, what does a neurosurgeon believe heaven looks like? Listen to Eben Alexander’s story to find out.

Can’t wait to hear you in person! Thank you for all you do!