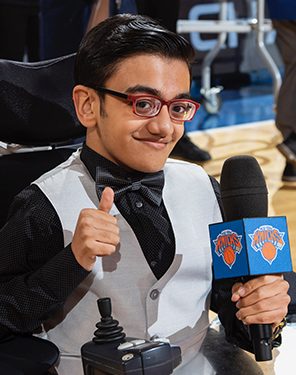 John O’Leary shares the story of Sparsh Shah, an inspirational young man who models overcoming challenge and being “not afraid.”

Each day holds a surprise. But only if we expect it can we see, hear, or feel it… Let’s not be afraid to receive each day’s surprise, whether it comes… as sorrow or as joy. It will open a new place in our hearts… where we can welcome new friends and celebrate more fully our shared humanity. – Henri Nouwen [Tweet this.] | [Share on Facebook.]

I’d just finished speaking at a financial service conference at Wharton College in Philadelphia. Backstage, I took off the microphone, thanked the AV team for their help, and turned to head to the lobby for a book signing.

As I turned a gentleman practically ran into me, gave me a firm hug, thanked me for the words, and then said:

Far away from the lobby, in some dimly lit hallway, in the underbelly of a college theater, I learned the story of a little fellow named Sparsh.

His father, Hiren Shah, shared that his son almost died at birth. Sparsh suffered from a previously undiagnosed ailment called Osterogenis Imperfecta. The condition is incurable and weakens the bones to such a degree that even moderate pressure can break bones easily. In fact, several dozen bones broke during Sparsh’s delivery.

Rather than bringing home a healthy little boy, the young couple was told they could take their child home, but not to be overly optimistic about his possibilities for life.

As he looked at his son struggling in that hospital room crib, Hiren Shah was crushed. He had dreamed of all his son might be. He had dreamed of cuddling and wrestling and loving and raising and launching a little boy into life. But now, he had this: An infant with broken bones, ailing and destined to be bound to a wheelchair.

As time passed, and as the child grew, Hiren would look into his son’s eyes and see something missing from his own reflection. He saw vibrancy, hope, courage, grit, peace, and playfulness in his son and, what he most longed for, he saw, too: Abundant, radiant, joyful life.

Although many physical activities would never be an option for Sparsh, he had discovered his own talent: Singing.

Abundance in the face of adversity.

In that Philadelphia theater, Hiren Shah handed me his son’s most recent recording. As I drove back to the airport later that day, I listened to it. Then, as I waited to board my plane, I watched a few YouTube videos of Sparsh preforming. He received a raucous standing ovation for his National Anthem at Madison Square Garden before an NBA game. I watched him cover Eminem’s song Not Afraid. Sparsh doesn’t use foul language, so he recorded a clean version of it. And apparently people liked it because it’s been viewed more than 75,000,000 times.

The more I watched, the more I enjoyed his sweet voice. But what I enjoyed much more than the music was the natural joy Sparsh exudes during every performance, in every song, through every word.

[I invited Sparsh to perform and share on our Live Inspired Podcast last week. Listen in to enjoy the music he sings under the stage name, PURHYTHM. Listen to hear the joy of a boy in chronic pain, strapped into a wheelchair, unable to do so much in life, and yet unbelievably grateful for all he cando. Check it out here.]

The Eminem song Sparsh covers begins with these lines:

I’m not afraid
To take a stand
Everybody
Come take my hand
We’ll walk this road together, through the storm
Whatever weather, cold or warm
Just letting you know that, you’re not alone
Holla if you feel like you’ve been down the same road

Yeah, it’s been a ride
I guess I had to go to that place, to get to this one
Now some of you, might still be in that place
If you’re trying to get out, just follow me
I’ll get you there.

Embrace the gift that is coming your way today.

In a marketplace with so much struggle, so many challenges, so much isolation, so much judgement of others, so much negativity toward ourselves, what an awesome reminder that sometimes we have to go to a difficult place to get to a new, better place.

And what better guide to clasp hands with along the journey than a young boy who joyfully sings out if you’re trying to get out, just follow him, he’ll get you there.

My friends, each day holds a surprise. But only if you expect it can you truly see, hear, or feel it when it comes to you. Choose not be afraid to receive whatever comes your way today.

And choose to reminded of the truth that you’re not alone and the best is yet to come.

[Tweet this blog.] "When a resolute young fellow steps up to the great bully, the world, and takes him boldly…