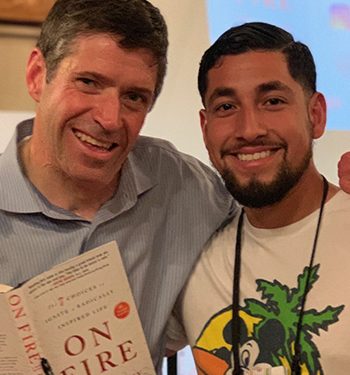 John shares how one man is living inspired by choosing to wear both a uniform and a cape. Learn what this meant for his kids… and what it means for you in your life.

One of my very favorite groups to partner with is Focus Marines.

They serve wounded veterans struggling with PTSD from every branch of military. Through their efforts these veterans are positively and profoundly changed. I’ve been fortunate to partner with them more than 40 times and each time I feel as if I stand on sacred ground in that room.

In our most recent gathering, I invited anyone who desired to share why they were going to choose to thrive from this day going forward. Why would they make the necessary, difficult decisions to write a better story going forward?

After a moment of silence a young Marine named Luis stood. He began by sharing that, due to a series of challenges and events, he’s only able to see his children for one hour each month.

He added that in their last visit, his children argued over a topic that surprised him. His son adamantly argued that his dad wore a uniform and was a Marine. His daughter disagreed whole-heartedly; she believed her daddy was a superhero and wore a cape.

Luis sat quietly observing the conversation and feeling like a fraud. He felt he didn’t deserve his uniform and he certainly wasn’t a super hero. So he quieted the kids, told them to stop arguing and shared with them that they were both wrong. He was neither.

That is how the visit with his kids last month ended.

This dad’s relationship with his kid’s improve, because he “chose both.”

Luis looked around the room and said he was choosing to have different, better and life-giving time with his kids going forward. He was going to live inspired; to really live to make that one hour each month with his children as meaningful and special as possible.

With all of us focusing our attention on Luis, he added, “I’m going to spend each minute, of each day, of each week, leading up to that one hour with my kids so purposefully as to eventually prove them both right. I want to feel worthy enough to proudly wear both the uniform of a Marine, serving my country, and the cape of a superhero, leading my family in honor and strength.”

The crowd of Marines around him cheered for him. A roar of ‘Hoo Rah’ went up from around the room. My heart leapt not only for him, but for his children.

My friends, do you realize that you are the captain of your own destiny?

And that your choice whether or not to exercise this right directly correlates to your level of happiness?

[Dig deeper into this truth with me + Meik Wiking, CEO of the Happiness Research Institute and author of The Little Book of Lykee (the Danish word for happiness). Meik joins me for an exclusive conversation on my next Live Inspired IN STUDIO webcast (5/20). Live Inspired IN STUDIO is my membership community of like-minded friends who come together to develop tools to overcome challenges + live our best lives. By special request from friends, registration has been extended through today only, closes at midnight + will not open again soon. Don’t miss it. Register now.]

My friends, today is your day to choose the uniform AND the cape and ultimately, happiness. Remember, you’re the captain of your ship.

Why are you climbing the ladder?

“Work hard, but make time for your love, family and friends. Nobody remembers PowerPoint presentations on your final day.” [Click…

“Some see things as they are and ask why. I dream of things that never were, and ask why not.”…

Why Should I Care?

"Your time is limited, so don't waste it living someone else's life. Don't be trapped by dogma - which is…