You Can Do This 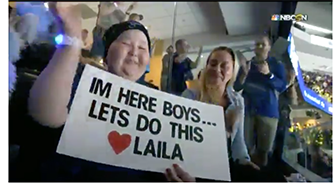 John O’Leary shares how St. Louis Blues fan, 11-year-old Laila, helping to turn a season around and lead the team to the Stanley Cup feels like a modern day “Jack Buck” story.

When you struggle, where do you turn for inspiration?

If you’re 11-year-old Laila Anderson, you turn to your favorite team, the St. Louis Blues.

Laila has an extraordinarily rare syndrome called Hemophagocytic lymphohistiocytosis. HLH causes severe skin rashes, fever and breathing challenges. It produces issues within the liver, kidneys and heart. It leads to fatigue, seizures, stiffness, blindness and cancer. This is an abbreviated list of some of the health considerations the few dozen patients with HLH endure.

There is no known cure for HLH and it is fatal.

Colton Parayko, Laila’s favorite player, happened to be her escort. That afternoon, between the 6’6”power defender and the little girl battling for life, an unlikely friendship formed.

Colton came by a few days later to visit again.

Each time, he left the hospital for the ice, Colton felt as if he was taking a bit of Laila’s warrior spirit with him.

In fact, he was so moved by her courage he brought other players to visit and experience her resilient spirit, too. (Hmmm… does this story sound familiar?! I can’t hear about Laila and Parayko without thinking about the day Jack Buck walked into my life.)

They visited initially to be nice, encourage and elevate her spirits. Yet, the players soon realized they were the ones benefiting. As players on the last place team, they desperately needed the inspiration at that time. Each visit, Laila reminded the guys that they could do this, they had it, stop looking backward and start looking forward.

How one strong-spirited 11-year-old changed the course of the last-place hockey team.

Apparently they were listening. Laila’s team put together a wildly unexpected, unheard of month-long winning streak. The Blues clawed from last place up through the standings and somehow roared into the playoffs.

They beat the heavily favored Winnipeg Jets to advance out of the first round. The second series against Dallas Stars went seven games before the Blues won in double overtime. This last place, out-of-it team kept fighting forward with the heart of a warrior.

Which should surprise no one because Laila continued encouraging the team even through a near month-long period where she couldn’t go out in public because the risk of infection was too high.

The isolation ended about a week ago when her mother shared great news: Not only could she finally go out… but she would be going to the Blues playoff game that evening! The video of Laila joyfully weeping went viral. (Image above is from NBC WQAD video.)

Her Blues lost that evening. And did so in agonizing fashion. After giving up the lead with a minute left in the game, they then lost on a goal that shouldn’t have counted. It’s the kind of sequence of evets in playoffs that frequently derail a team.

As they sulked about mistakes that lead to the loss, it was an 11-year-old who came down to talk sense into them. With light in her eyes she reminded the team what she’s been telling her friend Colton since Halloween: You can do this, you have it, stop looking backward and start looking forward.

Expected to lose the series after that game, the Blues haven’t lost since. They clinched that round at home. Their favorite fan even came downstairs to celebrate with the team afterwards.

Tonight, in Boston, her team begins fighting for the Stanley Cup from a position they’re familiar with: As underdogs.

What “those who set the odds” may not know is this: A little champion continues to remind her team how to fight through adversity even when others say you can’t. [Share on Facebook.] | [Click to Tweet.]

Tonight, whether you’re wearing your Bruins or Blues sweater or have never seen a hockey game, I encourage you to remember a mantra that keeps a little girl lit up in the face of adversity and one she has taught to a room full of hockey players, readying themselves to play for the Stanley Cup for the first time in nearly 50 years:

You can do this. You have it. Stop looking backward and start looking forward.

John, as always, your story today is simply ‘fantastic’ and truly wonderful. The story on Laila is so ‘perfect’ but even hence given her St. Louis qualities! What enhances is that I grew up in Boston, and while I live in Chicago the last 20 years, all of my sport interests includes every Boston team. And, as you point out, tonight the B’s start action and while I have come to truly ‘adore’ Laila, I ‘must’ continue to routine for my ‘dedicated’ team. I wish both Laila and Colton continued ‘success’ and happiness, but, yes, I am looking forward to the 3rd championship and upcoming ‘boat rides’ in the past year. To you John always appreciate your areas of concentration and people and quality for the future. Good luck!