Leave Your Baggage Behind 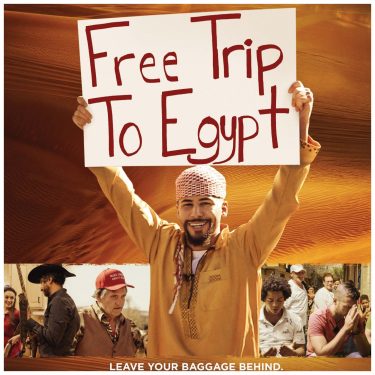 Can you break free from a divisive culture?

Have you ever heard someone describe a group with that sentiment?

Maybe the words were spoken by someone who has a very different perspective on how things should be run where they are employed.

Perhaps you heard these words whispered (or yelled!) about people who hold a different passport or have a different ethnic background or sexual orientation.

Or possibly a friend of yours said them while referring to a group of people who held different religious, political or parenting views than their own.

Regardless who spoke them or to what group they were directed, it likely carried with it a certain smugness. The type of self-importance that entitles us to cross our arms, shake our head and look down in disdain upon others.

Tarek Mounib came up with a radical solution.

Born in Canada to parents who were originally from Egypt, Tarek had a fairly uneventful upbringing. He did well in school and eventually moved to Switzerland for business.

In his adulthood, the constant, expanding and wildly divisive tension politically, religiously and between nations bothered him deeply. Rather than ignoring the problem or cursing it, he sought to solve it.

Tarek went to political rallies in the United States. While there, individuals would share very openly, honestly and negatively about “those people.” Not sharing that he was Muslim, or that his parents were from Egypt, or that he spent almost half his life with “those people,”  he would listen, nod, and learn. He’d then gently ask if they actually knew any foreigners or Muslims.

Most often they did not, so he’d extend his hand and share that he was one. The tone of the conversation changed immediately. Anger turned to apology. The certainty of opinion pivoted to questions and at end of the conversation, Tarek would invite the individual on a free trip to Egypt. They could visit the pyramids, check out Cairo, float down the Nile, but had to agree to meeting and staying with ordinary Egyptian people.

Although the vast majority did not accept the offer, seven did.

Seven brave people left home with their strong convictions to spend time being hosted by Egyptian families; Egyptian families, by the way, who felt just as distrustful and equally apprehensive about their guests. It turns out we all have our own opinion, our unique and biased lens through which we see the world and one another.

What resulted was profound. Individuals from totally different worldviews stopped judging a group of people they knew very little about. Instead, they sat together, ate together, visited with each other and conversed (with translators) about their families, hopes, dreams and the things that really matter.

(I interviewed Tarek on my recent Live Inspired Podcast episode. He’s got a terrific heart, a great story and a simple solution to unite the world through listening. I encourage you to listen to this episode here.)

Maybe You’re Not Flying Strangers to Egypt, But What Can You Do?

But today I encourage you to break free from the divisive culture we live in and instead, seek opportunities to listen and understand. [Tweet this.]

Choose to see “those people” as your brothers and sisters. It will not only change the way you view and interact with them, it will change the very world you interact in.

“Unless someone like you cares a whole awful lot, nothing is going to get better. It’s not.” – Dr. Seuss, The Lorax

Leave It All Behind