The Science Behind Jack Buck’s Impact on My Life 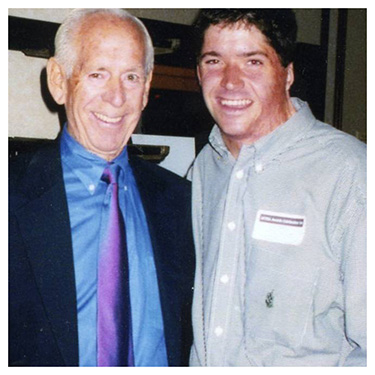 “A friend is someone who helps you up when you’re down, and if they can’t, they lay down beside you and listen.” – Winnie the Pooh [Tweet this] | [Share on Facebook]

I think often of the impact Jack Buck had on my recovery from the fire.

But it wasn’t until recently that I started to understand the science behind his impact.

Dr. Kelli Harding joined me on the Live Inspired Podcast to share her groundbreaking research that illustrates how love, friendship, environment and a sense of purpose can have even greater impact on our health than the care we receive from doctors.

And she shares about her new book The Rabbit Effect, which makes a compelling case for treating others with kindness. Check out this fun, warm and life-changing conversation here!

The following excerpt from my #1 national bestselling book ON FIRE: The 7 Choices to Ignite a Radically Inspired Life shares the story of how Jack Buck helped me survive and thrive.

He entered into it just a few days after I was burned.

The odds of surviving remained overwhelmingly slight. Because of the high likelihood of infection, the only individuals allowed into my room were essential staff members and my parents. At the time there was a strict rule: absolutely no visitors.

He’d never met me or my family. He’d simply been told that a little boy in the community had been injured, faced long odds, and needed some encouragement. That was enough for Jack.

He was unprepared for the beeping, the warning lights, the respirator’s loud gurgling noises, the little boy stretched out on a bed wrapped literally head to toe with bandages. I later learned his first visit was so short because he became so emotional, he could no longer speak. After telling me to keep fighting, he left the room, ripped off the scrubs and broke down weeping in the hallway.

A nurse came over to comfort him. After all, they didn’t get celebrities in the burn center every day. And they certainly couldn’t have the biggest celebrity in St. Louis break down on the floor!

He left the burn center with this information.

Jack had done his good deed. He had visited a dying kid in the hospital. He owed me nothing.

I had the pleasure of hearing your story at the Vistage meeting last Tuesday. It was an incredible story and sometimes we don’t understand God’s plan of why we attend certain things or why you even were a guest speaker. I have a small company (89) employees and today one of my salesman’s sister was involved in a horrible accident much similar to your experience. She was going to the store to fill up a gas can and placed the gas can in the back seat of her car and a fire broke out burning her over 100% of her body. As i listened to the details of this horrific tragedy I had hope through your inspiration and comforting words for my employee because of your story. I purchased your book at the event and was able to give it to him for inspiration. Thank you for inspiration and willingness to tell your story to help others.