The Truth of Groundhog Day 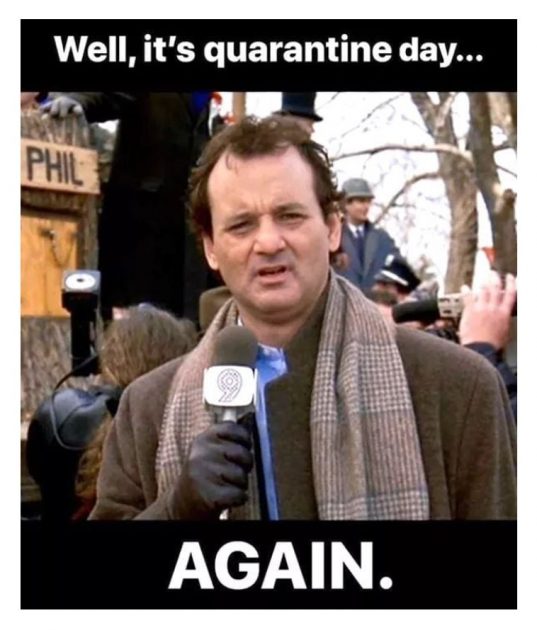 “What if we have to do this next year, too?”

My daughter, Grace, asked this question last week after being informed the rest of her school year was canceled. Although having her dad around all the time for the past month is great, she misses her teachers, playing with friends and living her old life. She also feels like every day is just about the same as every other day.

Numerous professional colleagues, personal friends and family members have referred to the past several weeks as if they were stuck in the movie “Groundhog Day.”

In the movie, a cynical, insolent, self-centered weatherman named Phil Connors (played perfectly by Bill Murray), is doomed to repeat the same day of his life. Day after day, week after week, the arrogant reporter awakes in Punxsutawney, Pa. sees the same people and has no way to escape the profound sense of monotony. He feels isolated, lost, hopeless.

With so many restrictions on where we can go, who we can see and what we can do, it feels like an appropriate analogy.

And yet, while the monotony and misery of reliving the same day at first drives Phil Connors crazy, eventually it fuels him to harness the gifts within each day and become a far better version of himself.

The man previously directed every thought, every word and every action to maximize what he could get for himself out of any situation. His life was entirely about him. In time, he recognizes his only real joy is found when investing totally in becoming better… so that he elevate the people around him.

On the day he finally breaks the Groundhog Day cycle, Phil strives to enjoy his greatest day yet. A partial list of how he invested himself fully in that day includes:

Only to wake up, rested, at peace, then euphoric, upon realizing that the time loop was broken – the day was new. The fullness that is the adventure of life remained available to him and he sprinted into the new day ready to fully soak it up.

My friends, at some point we all will look back on what we did during our Groundhog Days. Did we relentlessly stream “Tiger King,” catch up on 22 seasons of “The Simpsons,” and complain about the difficulties of being confined each day?

Or did we reach out to those in need, learn something new professionally, read a new book and become a far better version of ourselves?

The day we currently live on repeat will eventually fade into the past.

Let’s be like Phil Connors and not only expect a great day, but let’s strive to actually create one.

P.S. – Speaking of reading a new book, after some concerns with distribution during this difficult season, our publisher was able to find a new partner to ensure IN AWE is printed, distributed and ready to be enjoyed for its release on May 5. Super excited about it!  Order your copy now and you’ll be reminded of the reasons for joy, inspiration and meaning still alive and well within your life. www.ReadInAwe.com

3 replies on “The Truth of Groundhog Day”

Please sign me up for the Monday morning inspirational blog. Thanks!

Brilliant start to the week!

The Truth about the Finish Line

On this week's Live Inspired Podcast Monday Moment segment, John O'Leary reminds us to make today great. Join me every Monday for…