Which side are you on?

“Pit race against race, religion against religion, prejudice against prejudice. Divide and conquer! We must not let that happen here.” 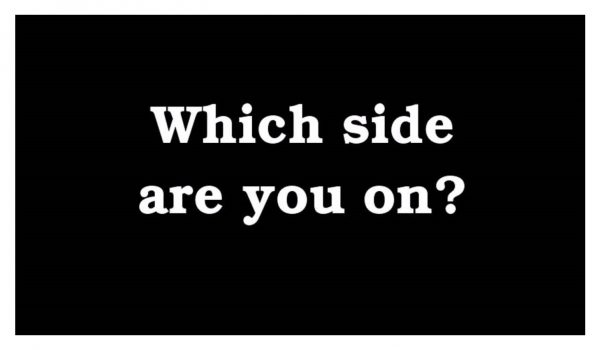 “I refuse to criticize those rioters and looters. After all, they’re on the right side on this one.”

I read this in my social feed last week regarding what took place around the nation the previous evening.

On that night in my city, St. Louis, more than 70 buildings were torched. Firefighters were intentionally slowed by rioters to hamper their response and then had rocks hurled at them as they fought the flames. Bottles and fireworks were heaved by a mob toward police officers; tear gas was shot back by the police.

All of this begs the question, are they on the right side of this one?

But seemingly on the other side of the growing schism are reports of police lashing out violently against peaceful protesters.

Numerous videos illustrate the brutality including a police cruiser driven into crowds in New York, an unarmed man shot in Louisville, and two individuals pulled from their car and beaten in Atlanta. In yet another disturbing act, as a line of police officers clear protesters in Buffalo, a 75-year-old man was forcefully pushed, lost his balance, tripped awkwardly, cracked his head against the pavement and laid motionless as a pool of blood formed around his head. After a video of the incident appeared, the two officers involved were suspended. In response, 57 of their fellow police officers resigned because they perceived the suspension as unjust.

So, are those police officers on the right side of this one?

My friends, as tension builds, as lines get drawn, as rhetoric intensifies – I beg you to no longer view it as someone else’s problem or buy into the tired “you’re either with us or you are against us” dialogue spewed for far too long by political leaders, media pundits and social influencers. There is a more nuanced perspective required to make the change so desperately needed.

Several centuries after its inception, our nation continues to wrestle with its original sin: slavery. If we are going to eradicate inequality and end the racial divide, we must first confront the system and the bigoted history that fostered it.

While it’s common to see signs in yards or posts on social media, the real work entails learning about the inequalities that grew out of the old system that still directly impacts our current one.

It requires improving our education system that is failing many in our urban communities; transforming our penal system that delivers harsher punishments to people of color; elevating the education and training for our police departments; and providing far greater economic opportunities for communities that for far too long have been left behind, beat down and oppressed. This is a broad stroke and just a few of the expansive systematic remedies required. This season of great unrest was not created overnight and will not be fixed overnight. It will take a collaborative approach requiring profound wisdom, resolve and grace.

These systematic reforms necessary are impossible unless we determine collectively to see the dignity, worth and value of our neighbors, regardless of the color of their skin, political affiliation, gender, or life experiences. We must accept the impact of biases and renew an emphasis to wholeheartedly listen, seek to understand pains, empathize with underlying frustrations of oppressed communities and treat those from different backgrounds as absolute equals. [Click to tweet.] This important work doesn’t begin at a federal or state level, but with the reflection staring back at us in the mirror.

I’m on the side that is tired of the polarization of thinking and refuses anymore to pit race against race, religion against religion, party against party, prejudice against prejudice. The side that understands we must stop sowing the seeds of hateful divisiveness.

I’m on the side that is angry with the way a significant part of our population, our family, has been treated. The side that desires fundamental improvements now.

I am on the side that believes respecting the dignity and value of every human life is foundationally essential for any society to truly thrive. The side that holds us accountable to supporting this truth through our actions and the side that expects others to be held accountable for their actions.

I’m on the side that is profoundly grateful for the vast majority of our police officers who selflessly protect and serve those they’ve never met, who strive to keep communities safe, and who risk their lives daily for strangers. The side that believes unwaveringly that they should be respected and have the same right as anyone else to return home safely at the end of the day.

I’m on the side of supporting protests demanding equality, endeavoring to both open our eyes to our privilege and our minds to recognize our implicit bias. The side that believes, even still, in the right to life, liberty and the pursuit of happiness for all people.

This is my side.

And there is room for everyone on it.

2 replies on “Which side are you on?”

Thank you for putting this perspective in words so simply and powerfully. We must not get divided!

Thank you John. I stand with you on the side of live, liberty, and justice for all. Be strong and use your bully pulpit well.

Live Inspired Podcast: There is Room on My Side for YOU. (Monday Moments ep. 261)

On this week's Live Inspired Podcast Monday Moment segment, John O'Leary invites you to see his side. Join me every Monday…