Skip to content
Home | Blog | You Can’t Change the Past, Change the Future
Monday Motivation | June 22, 2020 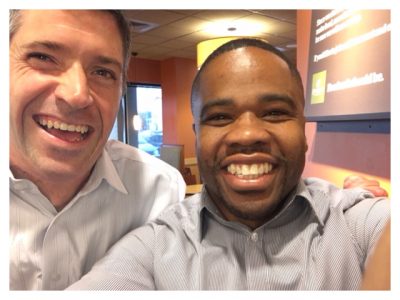 Yesterday I had the pleasure of celebrating Father’s Day with the greatest man I know, my dad.

In the backyard of the same home where I was raised, I recognized how many aspects of my upbringing that I simply took for granted. Looking at my parents seated together, it was clear the profound blessing of being raised in a loving, supportive family by two steadfast examples of faith and selflessness, and love.

Visiting with my siblings, it’s impossible not to see the impact of being raised in a home and within community that expected excellence in school, graduation from college, and gainful employment upon graduating. It wasn’t an option, it’s simply what everyone did.

Watching my kids swim in the backyard pool, it’s foolish not to consider the benefit of growing up in an absolutely safe, supportive, beautiful community. We never had concerns of safety, never saw drugs, never heard yelling, never once felt scared. It’s a vastly different experience for those being raised in communities where none of that holds true.

My friends, as I become more aware of privileges and advantages I wasn’t even aware of receiving, I’ve been reaching out to my friends of color. I’m trying to support, listen and learn from them. I’m also trying to ascertain ways we can come together and effectively provide many of the same opportunities we received to a community that for far too long has not.

Today, be humbled and inspired by the amazing story from my friend and past Live Inspired Podcast guest, Koran Bolden. His life story will humble you on the challenges so many face, but also inspire you to recognize that one person can make a difference.

…Koran Bolden grew up in an impoverished community surrounded by crime. Although he never knew his father, he had a strong father figure: his brother, Anthony.

Anthony’s drive to do better, graduate, find work and make something of his life inspired his little brother to strive, too. He encouraged Koran not only through his example, but by constantly reminding his little brother of how remarkable he was and how bright his future remained.

That all changed one evening with a knock at the front door.

Koran heard commotion downstairs, got out of bed, walked to the top of the steps and listened to the erupting chaos below. Although just eight, Koran knew his life would never again be the same when he heard his mother cry out:

Little Koran could not cope with the grief, sadness and anger of his brother’s murder. It was an inflection point that prompted a downward slide. Although never before in trouble, Koran began making bad decisions, hanging with the wrong people and struggling mightily in school. Several teachers spoke openly about him using words that stung. He began to believe they were true:

The adults speaking these words had no idea what Koran had been through, all he’d lost, and were unable to see the potential that still remained. Hearing these words crushed Koran. The young boy longed for someone to encourage him to be who he could be, instead of repeatedly telling him who he wasn’t.

A school counselor named Martha Christmas became the voice of possibility. Her steadfast love and encouragement would change his life. She assisted him with schoolwork, reassured him he could succeed and told him repeatedly that she believed in him. She then shared words he credits with changing his life as a child and inspiring his actions as a man:

A simple sentence that reminded him that his past no longer needed to define his future.

The spark in his eyes and possibility for life returned. Koran finished middle school and graduated from high school. He thrived in writing and was presented an opportunity to leave home, move to California and begin producing music. Although he’d just become a father himself, Koran planned to leave his child and pursue the opportunity, until his mother sat him down, looked him in the eyes and spoke firmly to him:

Koran heeded his mother’s advice. He declined the record deal, stayed home with his child, got a job and worked hard. He got married, they had two more children and enjoy a wonderful life. Koran shows his own children through his presence that he loves them. He also reminds them daily through his words that he loves them and that it’s not their past that defines their future, but their actions.

My friends, as the tragic polarization of our nation continues to grow, it’s more important than ever we intentionally use our words to draw others into the conversation, not chase them away from it.

Today, let’s choose to be agents of possibility in a marketplace of negativity. Let’s unite others to discuss significant challenges and engage in thoughtful dialogue. Let’s determine to create a world that reminds others through our words and through our lives that they are worthy, they belong, and the best is yet to come.

Words do create worlds. What a great way to think.

I love this Blog! Words are truly powerful; they either build up or tear down in a hurry. A great reminder that it takes at least one to see the hurting soul for who they really are, to believe in them and to empower them to rise up and be truly who they are. Thank you 🙂

Little Curtis and His Big Message on Belonging

"Generally, by the time you are real most of your hair has been loved off, and your eyes drop out and…

How to Change the World

Showcasing the Power of YOU “Let us remember: One book, one pen, one child, and one teacher, can change the…