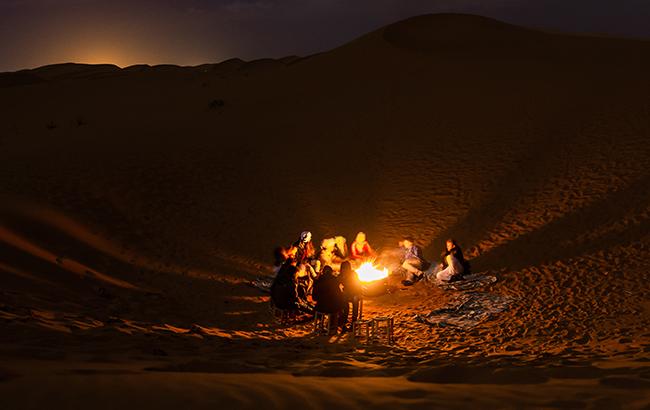 Today, every topic broached is immediately polarizing and leads to rigidly drawn lines between two opposing sides. John O’Leary shares how to veer away from this hostile, divisive path and instead draw a new inclusive one.

“Love is wise; hatred is foolish. In this world, which is getting more and more interconnected, we have to learn to tolerate each other, we have to learn to put up with the fact that some people say things we don’t like. We can only live together in that way. But if we are to live together, and not die together, we must learn a kind of charity and a kind of tolerance.” -Bertrand Russell

In our society, every topic immediately polarizes, fragments us further, and quickly leads to rigidly drawn lines between two opposing sides. Those on our perceived side are right, they’re our allies, the good guys. Those on the other side are to be pitied for their unawareness, canceled for their ignorance or attacked for their stupidity.

So what’s ultimately going to be the result of this elevating anger?  What happens as our media complicity sows seeds of outrage each day and our political leaders jam a larger wedge into society? What are the consequences if we choose to continue down the hostile, divisive path we’re on?

Well, the answer was framed brilliantly in one of my favorite poems by James Patrick Kinney. Written in the early 1960s, it is, sadly, highly relevant today. The poem is titled The Cold Within:

With external forces like hurricanes in the Gulf, forest fires in California, nationwide social unrest and a global pandemic, it’s not unreasonable to feel discouraged. With rising unemployment, increased loneliness, elevated dread, growing mistrust and heightened anxiety, it should come as no surprise many feel as if they are sitting around a fire, angry at the others, furious about their past, incensed by their plight, and distraught by their future.

Through inaction or action, by omission or commission, through violence or subtle indifference, it’s one way to move forward from where we are. And it will lead to us grasping tightly the wood in our hands as the fire slowly dies.

We can make a radically different decision to embrace deep personal accountability for where we are, determine to come back together, engage with those different than ourselves and listen to their opinions. Rather than ranting, posting or canceling, we can listen with an open mind and open heart capable of actually learning from those who have had wildly different life experiences than our own. We can acknowledge that the redemption of today’s profound challenges demand far more than a single party, one opinion or pithy social media posts.

My friends, it’s important to recognize that past mistakes don’t have to negatively define the possibility of doing better going forward. It’s critical to remember that hate and anger and ignorance can not possibly cure hate and anger and ignorance. In our wondrously diverse community, it’s necessary to love and respect one another despite differences in opinions, beliefs, and convictions.

Not sure where you can begin?

Search out and build relationships with individuals who worship, look, vote, and think differently than you do. Begin listening to understand, empathize, connect and grow. Instead of being incited by watching the news, get involved by becoming active as a volunteer within a community. Your service will frequently connect you with those you might not meet otherwise. [In fact, why not join one of the best at positively changing society, one life at a time: Big Brothers, Big Sisters? It will set you in motion to better the life of another. Remarkably, though, the life you’ll improve most is your own.]

As the fire begins to wane and the light begins to fade, it’s time to return to the circle, together.

It’s time to learn from mistakes we’ve made for too long, knock down walls we’ve built to keep others out, and reengage in solutions that elevate not only individuals, but also culture. It’s time to not only take full responsibility for our lives, but to recognize the calling to serve as our brothers and sisters keepers, too.

In other words, in a marketplace where many angrily and selfishly hold fast to their wood, it’s time for us to throw ours onto the fire.

32 replies on “The Cold Within”

I LOVE this message and i have/will continue to do my best to live it everyday. Your Monday inspirations and weekly Podcast helps me “live inspired’. Continue to allow God to use you as his messenger for the masses. Be blessed!

Thank you John Oleary for being a voice of Love, Hope and Faith! You are a voice for what is good, what is true and what is real in each and every person that God has created! Each and everyone one of us is a child of God! Unique, Precious and Loved! Each and every Soul matters to Him. Thank you for Highlighting the Good in His creation! You do spread the Good News in so many ways. Thank you!

Wow! Can we do this? I was always peaceful and helpful. I volunteer in many things for Humanity, but these past few weeks here in the USA is sure demoralizing. I try to remain positive, look at the news for a few minutes in the evening. Try to look at both sides, but things are sure sad. Thanks for your encouragement.
Amtoinette

Yes, we can do this, Antoniette….and we must! Thanks for your service and joy … we need it now more than ever. Continue boldly — John

Thank you! Your topic is perfect as politics , racial unrest, COVID debate continue. Thank you for your wise words.

Very timely and wise. I listened to a similar message from Red Rocks Church titled “4 Things Christians Should Say More Often.” The 4 things: I don’t know., I can learn something from that person., It is going to take more than that to offend me., I was wrong.

Wow.. Love this message today!! The poem is amazing and I will be sharing it! Thank you!

Thank you,, John. I too found this message very inspiring and am praying it stays with me in the years ahead. It truly does begin with us.

love the call to action John – thank you!

Thanks John – a very inspirational and thought provoking message to start the week !!!

Keep it going my friend…

YOU are a great man, GM….Keep making a difference — JO

Believe in the Power of Positive Living and Thinking. I met John O’Leary in Helena, MT. I want his book, In Awe.. I just got out of the rest home. This pandemic caused me medical and mental illness.
My PTSD, trauma of not knowing how to control anger was very scary. My Osteoarthritis, sciatic nerve and pain on my right side and back . I keep believing in GOD and Positive things when facing this crisis.
I like talking with my friends every day on Facebook and play games on Google. I love coloring, crossword puzzles, jigsaw puzzles.
Mainly associating with people everyday.
PLEASE pray for our doctors and nurses and medical staff as we continue to fight against this virus.
PLEASE pray for our FIREFIGHTERS ,police all our country through this time.
PLEASE pray everyone gets together and appreciate one another and America. We are all GODS CHILDREN.. Prepare for GOD as we face this Great Depression. Our parents, ancestors faced times like this. We can do it!!! By working together as a Survivor and Thrivers, friends of our country. AMEN!!
JUDY ERICKSON
gerickson933@gmail.com

John, this really touched me this morning.
Praying or our country.

Thanks Kay –Your encouragement means more than you know — JO

John, thank you for this very thought provoking message. I plan to share with many and to throw my stick of wood onto the fire. Always a great way to start the week.

Joe — you’ve been living this message as long as I have known you … Grateful for ALL you do and who you are …. keep throwing the stick of wood into the fire.. JO

Thank you John, I really needed this today!

Mr. John O’Leary. I have seen you in person, read one of your books, and enjoyed many of your writings, perhaps none more than this. For many reasons. Today, I’ll throw my wood in the fire. I will also be voting for you for President! No joke.

Ron, That is one more vote than I have ever received for Pres…..or ever expected to receive! Love ya man! — thanks — #Oleary2020

RH — I humbly accept the Ron Harriman nomination for president of the US. I’ll see the rest of you in Nov! #Oleary2020 Thanks Ron and have an awesome week — keep making a difference — JO

Thank you for the inspirational and thought provoking message this Monday morning. As I read it I thought of so many others who should also, but then realized, it begins with me. Thank you!

While the world wants to change everything about everyone else, let’s choose to start with the reflection in the mirror.. .Thanks for the reminder, Lynn

What an incredible message today, John. Not only was the poem very moving and gave me pause, but your words about how “important it is to recognize that past mistakes don’t have to negatively define the possibility of doing better going forward”, and that “it’s critical to remember that hate and anger and ignorance can not possibly cure hate and anger and ignorance” were incredibly, incredibly PROFOUND- and were absolutely flawless in their understanding. Thank you so much and keep on doing what you are doing….bringing hope and light and love into our world. God bless you.

Faith. Hope. And Love. And the greatest of these is love…… In a divided, agitated marketplace, we must remember to become for others what we wish we might see in others. Thanks NH

Love this!! Thank you x

John – well said! I stepped out in faith and am educating myself through a group called Be the Bridge and my many friends and accquaintences that are POC and other cultures. This paragraph you wrote:
It’s time to learn from mistakes we’ve made for too long, knock down walls we’ve built to keep others out, and reengage in solutions that elevate not only individuals, but also culture. It’s time to not only take full responsibility for our lives, but to recognize the calling to serve as our brothers and sisters keepers, too.
This is hard but I believe the work is worth it!
Thank you for your encouragement – CW

I’m checking into the group you joined …. we need more Bridges, Cheryl!!!!