It’s Only Coffee… and Tomato Juice 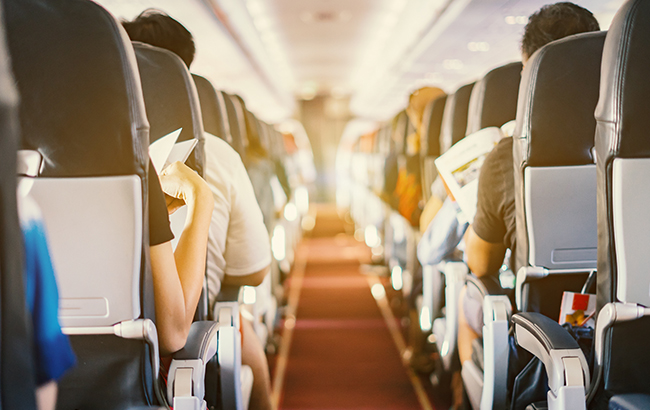 John O’Leary reminds us how to respond with grace and why it is so important during this divisive season.

“Never wish that life was easier. Wish that you were better.”
– Jim Rohn

Does it seem like people are quick to anger these days? For many, it’s as if they go around seeking reasons to be disappointed, upset or infuriated. Have you noticed the hostility they share frequently makes things even worse?

But what happens when an individual who has every right to be upset chooses instead to respond with grace?

Years ago on an early morning Southwest Airlines flight I had such an experience.

After reaching our cruising altitude, the flight attendants took drink orders and passed out a snacks. They then began serving the requested drinks to the passengers. A hot coffee was set on my drink table and the passenger sitting directly behind me was handed a Bloody Mary. (Hey, it was already 6:30 AM… and probably 5 o’clock somewhere… Don’t judge!)

Unfortunately, at that exact moment the plane hit turbulence and some of her drink spilled on the lap of the lady seated to her right. It was not a pretty scene. There was a lot of commotion, significant anger, and lots of words needing to be beeped out. It’s the kind of interaction we are, regrettably, too familiar with these days.

Fortunately, another passenger came to the rescue, trying to help clean up the mess that was now seeping into the aisle. Unfortunately, in bending down she accidentally lifted up the tray of the gentleman on the other side of the aisle. It was like a sitcom, but with absolutely no laughter.

A surprising response brings joy during a challenging situation.

The messy dominos of life were now falling. And as it sent his freshly brewed cup of coffee into his lap, the dominos weren’t done, yet. Concerned that he might get burned, the lady with the Bloody Mary actually took what was left of her tomato juice and poured it on his pants.

As a guy who’s experienced actual burns I can appreciate the gesture, but next time let him choose it for himself… and maybe with water, instead!

As the carnage eventually began to subside, I watched this unlucky victim wipe at his hopelessly drenched pants. During a time when many feel they’re entitled to allow little things to infuriate them quickly, he responded in a most surprising way. Although clearly heading to a corporate meeting and badly needing a new pair of pants, a most unexpected expression appeared on his face: a smile.

A flight attendant apologized profusely to him as he looked up from his pants, into her eyes, smiled again, and shared a quote I’ll never forget:

“It’s only coffee… and tomato juice.”

In the midst of the chaos, remember this truth.

My friends, things will happen this morning and this week completely out of your control. Global pandemics will spread… and the media will cover it. The weather will be hot… or cold. It will rain… or the drought will continue. She’ll be late, or he won’t show. The kids will whine, or the silence will be deafening.

But because of a man with a ruined pair of pants and a smile on his face, we now have a simple, better example on how to respond:

Not to wish that life becomes less messy, but to become wise enough to remember that it’s only coffee… and tomato juice.

Life remains a gift. Let’s choose to act like it.

26 replies on “It’s Only Coffee… and Tomato Juice”

“Rejoice evermore. Pray without ceasing. In every thing give thanks: for this is the will of God in Christ Jesus concerning you.” (1 Thessalonians 5:16-18)

Reminds me of how when sometimes when our kids spill a drink We can choose to be upset about it, or just decide that it is no big deal and clean it up. Either way, it gets cleaned up, the difference is how you personally feel after and the lasting impact it has on your kids!

Thanks John, a beautiful reminder!

We came home from school our house completely burnt to the ground only concrete walls standing. A man said to my father aren’t you angry and upset at what’s happened loosing everything? Dad said it is only stuff most important my wife and children are all safe! Wow I was 15 years old never forgot that “it is only stuff my family being safe is the important thing “

It is amazing how uncomplicated our lives can be when we truly listen and either comment or don’t comment. This story told about an accident. If one person or more starting yelling it sets the tone for those who have something else to complain about. What grace that gentleman showed those around him; I hope his spouse/family/friends/co-workers get to be a part of his grace when things go wrong.

Learning to be graceful in ungrateful situations.

Absolutely needed this this morning! It reminded me of a story from this last March, right before we shut everything down, when I was returning from St. Louis after hearing an inspirational speaker.. yes, that was you. I was flying back to Birmingham and had brought a bottle of water with me (the kind that has the pull top), midway through the flights I reached for said bottle and pulled the pop top up to get a drink, completely unaware that cabin pressure can cause a volcanic eruption! The water shot straight up, hit the ceiling and rained down on the lady sitting in front of me. I tried everything to get it to stop but my water bottle seemed to have a mind of its own. I sat there completely in shock and began to wince in preparation of the verbal onslaught I was sure was heading my way. The poor drenched passenger in front of me turned around and began laughing, wait, what?, yes, she was laughing hysterically! Apparently, she had died her hair the night before and when the water rained down it caused red streaks on her face and hands and she tried to clean herself up and thought she had somehow began to spontaneously start bleeding from her head! Much to her relief, she said, … it was just water.

Thank you & God bless you for your inspiring messages. They are always so helpful.

Thank you, John. Great story, and wonderful reminder at the end that… Life remains a gift. Let’s choose to act like it.

John, thank you for your continued inspiration and wisdom. It’s so vital to our souls!

John – Just what I needed this morning. It is always a pleasure to read your motivational messages.

What a great start to a Monday! I hope ALL of those people read your blog today! We all need to think before we speak. Someone’s always watching–especially our Heavenly Father! Thank you for being such an encourager!

Thank you John, the story is inspiring and I will carry it with me throughout the day.
Yes, life is a beautiful gift. Enjoy!

John, your message this morning could not have been more timely. Thank you for putting life in perspective. Have a great day!

I Love this John. The World needs to hear your message.

Thank You, John. I was feeling Sorry for myself & this helped me to put it all into perspective & reframe. ❤️

I needed this on a rough Monday morning.

When you know Jesus, the smiles come a little easier. This guy on the plane must know Him.

I love this John! It reminded me of something that I experienced this spring. I was inside a restaurant waiting for a to-go order. A gentleman came in to pick up his order, and the hostess who was probably 17 years old, came back with a nervous look on her face. She said “I’m sorry, I’m going to be honest with you, we are busy and I forgot to put your order in.” I was bracing myself for him to yell at her. However, he looked at her and said “Not a big deal, it happens!” I was surprised, and knew I had to say something. I looked at him and said “thank you for being kind, most people would be super upset about that.” He responded, “it’s truly not a big deal, it happens.” You could see the fear fall from the hostess face. I truly won’t ever forget that. It reminds us in times of turbulence and frustration, to not sweat the small stuff!

I think I have met this man or one very similar! When I was a brand new waitress I spilled a large cup of tomato juice all over my customer and the table. He basically said the same thing, it’s just tomato juice, and shrugged it off. I was mortified and my face as red as the juice. He was so gracious and never let me feel like it was even my fault and left me a huge tip. I will never forget that interaction, when it could have been so different without his compassion. I still cringe when I see a big cup of tomato juice though knowing how hard it is to clean up!

That’s great! I will use that quote.

We came home from school our house completely burnt to the ground only concrete walls standing. A man said to my father aren’t you angry and upset at what’s happened loosing everything? Dad said it is only stuff most important my wife and children are all safe! Wow I was 15 years old never forgot that “it is only stuff my family being safe is the important thing “