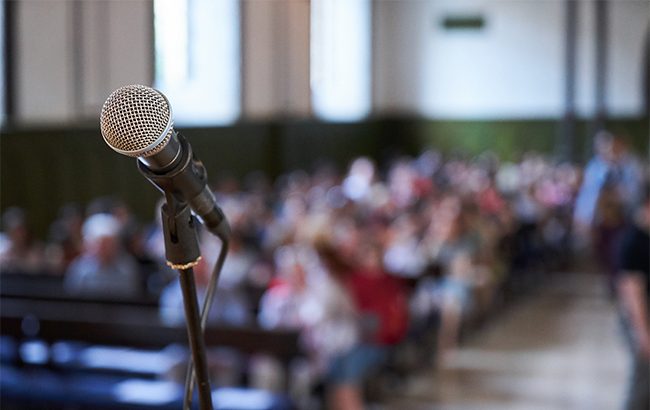 On the night Martin Luther King Jr. was murdered many cities experienced riots with more than 2,500 people injured. Indianapolis was not one of those cities largely because of these words from Robert Kennedy that we should heed today.

Will you marry me?
I do!
You’re pregnant.
It’s a boy!
You’re hired!
You’re fired.
It’s cancer.
The cancer’s gone!

The words we speak, and those we hear, influence and directly shape the world in which we live. Words are powerful and last week in our nation’s capital we witnessed a clear example of this truth. Five people were killed, dozens injured and one of the most sacred spaces in our country was desecrated.

Rather than debate the cause of this tragedy, let’s take pause and heed wisdom from a political voice from our past.

On the evening of the tragic assassination of Martin Luther King Jr., riots broke out in nearly every major city in the United States. Fueled by anger at the murder of the leading voice for Civil Rights, cities around the country burned, more than 2,500 people were injured, and 35 people were killed.

One of the few cities undamaged was Indianapolis. One of the reasons for its exception was the words spoken there by a Presidential candidate.

Robert Kennedy was on his way to speak with a mostly Black audience in Indianapolis when he was made aware of the murder of his friend, Dr. King. He was strongly encouraged by his security to cancel the event because of the likelihood of riots breaking out once word spread.

Kennedy ignored their concerns, approached the microphone and shared the tragic news with the crowd. Unscripted, he delivered one of the most powerful speeches in American history. A speech credited with keeping Indianapolis from burning and its people from injury on April 4, 1968. Delivered more than five decades ago, it speaks to the profound divisions we are experiencing as a nation as well as the hope of how we still can heal together.

Martin Luther King dedicated his life to love and to justice between fellow human beings. He died in the cause of that work. This is a difficult day, and a difficult time for the United States. It might be a good idea to ask what kind of a nation we are. We should ask what direction we want to move in.

We can move in that direction as a country. We can move toward the country being more divided. We could move toward black people staying amongst blacks, and white people staying amongst whites. The two groups could be filled with hate toward one another. Or we can try, as Martin Luther King did, to understand. We can replace that violence, that stain of bloodshed that has spread across our land, with an effort to understand. We could have kindness and love instead.

Those of you who are black might be tempted to be filled with hate for white people. You might not trust all white people because of the injustice of such an act. I would say this to you. I can also feel in my own heart the same kind of feeling. Someone in my family was killed. He was killed by a white man, too.

But we have to try in the United States. We have to try to understand, to get beyond, or go beyond these rather difficult times.

“Even in our sleep, pain which cannot forget falls drop by drop upon the heart, until, in our own despair, against our will, comes wisdom through the awful grace of God.”

So I ask you tonight to return home, and say a prayer for the family of Martin Luther King. But more importantly, say a prayer for our own country, which all of us love. You should pray for the understanding and kindness of which I spoke.

But most white people and most black people in this country want to live together. They want to improve our lives. They want fairness for all human beings that live in our land.

It was an invitation to shift away from divisions and hatred. To cease all physical attacks and lawlessness. To reveal love and wisdom and kindness toward one another. And to extend fair treatment under the law for those who still suffer within our country.

The three steps to take this week to make the change we all need.

My friends, as we look around our world and nation, we need to heed this invitation. It’s not a Republican or Democratic issue. The answer we seek won’t be shared today on CNN, or on Fox, or MSNBC.

Today, we must extinguish the smug, self-righteous tone many pundits exude – and then we echo – about those with different beliefs than ours. We must acknowledge that the rhetoric has magnified divisiveness, increased hatred and does nothing to benefit any of us.

How do we even begin to do this? Well, this week, I encourage you to:

The change we actually need will never be delivered by a politician. It’s not that easy and never was. It requires a softening of our biases, a changing of hearts and a desire to be love in a marketplace still starving for it.

That’s not just Trump’s job over his final days in office. Or Biden’s for the next four years.

It’s each of ours. And it’s time to go to work.

Very encouraging and loving words. We need that today and trying to move forward. Happy 2021.

Thank you for this Monday Motivation, I just subscribed and read it today. Couldn’t have come at a better time!!!!
I look forward to seeing you here at Zeigler Auto Group in Kalamazoo on January 19th.
What an amazing testimony
Rebecca Coleman
Corporate Receptionist

Thank You, I am 78 and always admired Bobbie Kennedy. I was able while in industry to make a difference in the lives of people who are often overlooked or hurt because of race, gender, disability and religion. There is no reason for hatred, we are born to love. It is how we are raised and educated that forms our code of honor and our lives.