My Message to the US Men’s National Soccer Team 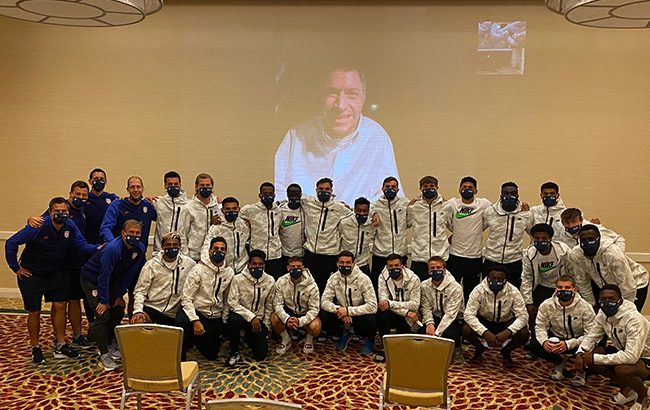 John  O’Leary’s message to the US Men’s National Soccer Team matters to you because they are the best example of unity in the US right now.

How do you achieve something as a team far greater than what could be accomplished as a disjoined collection of individuals?

This was the question I was invited to answer last week for the United States Men’s National Soccer team.

Their coach Gregg Berhalter and one of his assistant coaches, Travis Thomas, invited me to speak about what real success requires, how to come together to achieve it, and the mindset necessary to win each day.

What the US Men’s National Soccer team’s core values are and why they matter to you.

Near the end of our conversation individual players asked questions. One asked for my take on their three core values: Relentless, Brave and Unity.

I shared that being “relentless” or doggedly determined in the pursuit of a goal is a gift. It liberates us to show up in ways for others that transform both our lives and theirs. The best example, I shared, is my sister Susan. At just seven years old, her focus to save my life gave her strength, courage and drive to enter a burning home not once but three times; risking her life repeatedly, relentlessly, for mine.

When it comes to “bravery” I shared that, surprisingly, it doesn’t have much to do with being fearless or daring, but rather doing what may seem unpopular or untested for a cause greater than ourselves. To portray this idea, I shared the story of my fifth grade soccer coach. During my first game back after being burned, barely able to walk, Coach chose not only to let me play, but to take the final penalty kick that determined the outcome of the game. So many spectators in life are focused on winning some inconsequential game, but Coach bravely revealed what real victory looks like in action.

The best example of unity in the United States right now.

But I could sense it was the third value, “unity,” that is the most important to this team and the greatest differentiator from other national teams.

The US Men’s National Soccer Team consists of guys from every region and demographic of the country. A few trace their lineage in the United States back more than 10 generations; others are first generation Americans; one, Jesús Ferreira, a citizen for a total of 13 months. Some of the players come from extraordinary wealth, others were raised in poverty. A few are wildly conservative, some enthusiastically liberal, while most are somewhere in the middle.

In other words, they are a wonderful representation of the country they represent; and their unity, a wonderful example for us to model.

To celebrate the power within their unified diversity, I shared the story of the hospital team that supported my recovery all those years ago. An Armenian physician lead the team. My primary physical therapist was from Syria, the hand surgeon was from Italy. A Jewish surgeon and Catholic anesthesiologist collaborated for nearly every surgery.

The team responsible for my daily care over those many months included every race, sexual orientation, gender, age, political and religious affiliation. Some were wealthy, others worked several jobs to simply stay afloat.

Regardless of their differences, they were powerful because of their unified purpose. They chose to fully show up each day, utilize their individual gifts and galvanize as one team for a cause greater than themselves. This is why I am alive; why I thrived after my 1% chance of survival.

Before the session ended, I acknowledged that there is always the possibility that other teams have more talent. That is certainly out of our control, isn’t it? But, I reminded them, that their willingness to practice relentlessly, play bravely and come together in absolute unity will set them apart.

A few days later, the men’s team played a team that crushed their World Cup hopes in 2018.  Playing as one team, with one purpose, the United States National Team won 7 – 0 against Trinidad.

I’m optimistic these same values will elevate the lives of the citizens cheering them on, too.